These Nokia patents are why Apple is getting sued

It’s a strange list of patents that Nokia is suing Apple over – and not a list we’d have expected would have come so late in the game. Nokia’s set of suits have been filed in the United States and Germany, for starters – they suggest they’ll go further in the near future. At the same time Apple is suing Nokia for what they suggest is an effort to “extract and extort exorbitant revenues unfairly and anticompetitively from Apple and other innovative suppliers of cell phones.”

Apple suggests that Nokia is using their patents – which span far and wide, mind you – to collect more money than they should be allowed. Apple says that Nokia’s tactics aim to make more than fair-use laws and requirements should normally allow. Apple’s statement invoked the “burning platform” of Nokia’s business and suggested that the company turned away from phone creation, and toward patent exploitation.

Nokia and Apple have been in talks about patent use and licensing fees since the year 2009, two years after the first iPhone was released. It was then that Nokia’s patent suit was first filed against Apple for GSM, UMTS, and WLAN standards and technology. In the year 2011, Apple began paying licensing fees to Nokia.

“We are very pleased to have Apple join the growing number of Nokia licensees,” said then-CEO of Nokia Stephen Elop. This came after Apple sued Nokia for the first time for very familiar reasons. “Responding to a lawsuit brought against the company by Nokia, Apple® today [December 11, 2009] filed a countersuit claiming that Nokia is infringing 13 Apple patents.”

Nokia’s most recent suit includes 32 patents including those for antenna, chipset, software, user interface, and video coding. Nokia suggests that “Apple has declined subsequent offers made by Nokia to license other of its patented inventions which are used by many of Apple’s products.” The full list of patents Nokia is suing for are listed in the image below. 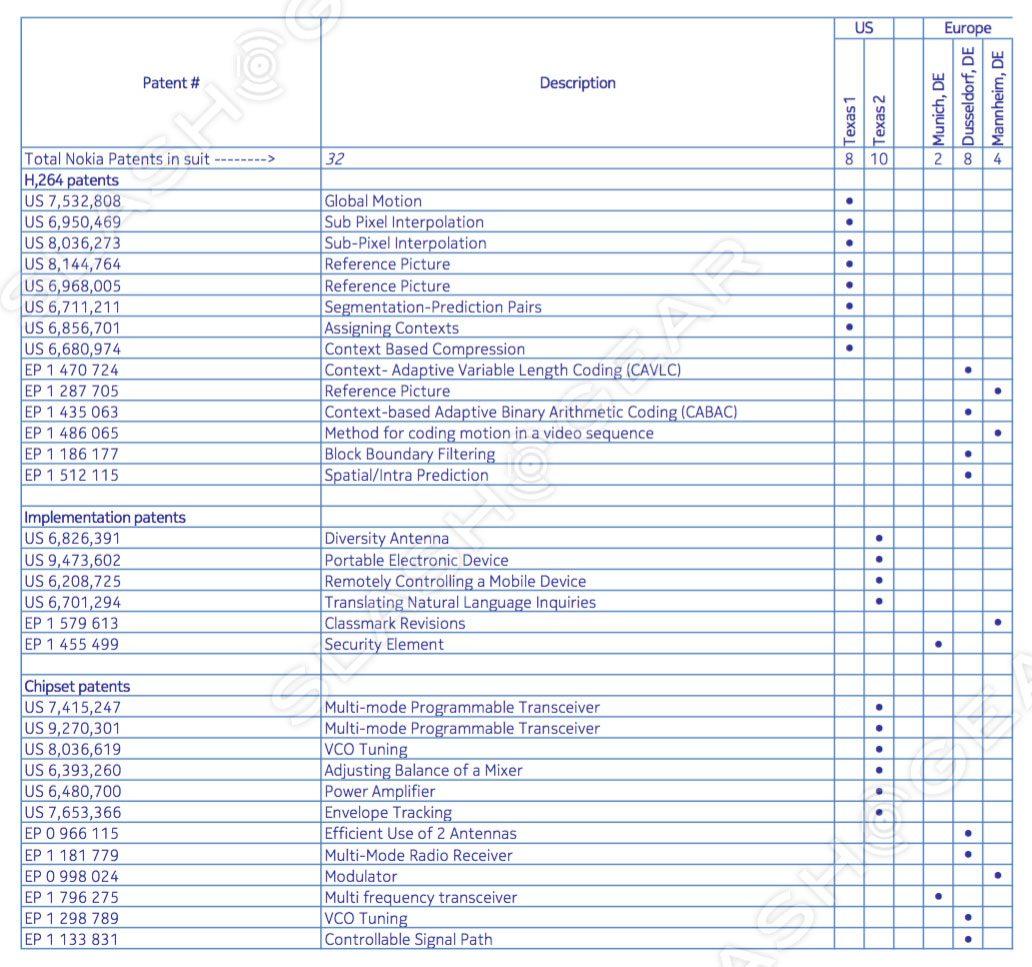 Suits have been filed by Nokia in the Regional Courts in Dusseldorf, Mannheim and Munich in Germany, and the US District Court for the Eastern District of Texas. These patents are marked in the image above according to the courts in which they’re being filed. These patents are categorized in three sections: H.264 (AKA MPEG-4 Part 10, Advanced Video Coding), Implementation, and Chipset.

At this time it is not clear whether Apple’s suit is in response to this oncoming suit, or if the other was filed before this one. Either way, Nokia and Apple are in a renewed patent war the likes of which we won’t likely see the end of any time soon.