Today it was hypothesized that Star Wars: The Force Awakens’ own Captain Phasma is none other than “Ewoks” character Cindel Towani. A pair of “Ewoks” movies were released in 1984 and 1985, both of which lived (sort of) in the Star Wars universe and mostly in their own, alternate universe. In the movies, a young girl by the name of Cindel (and her family) crash-landed on the forest moon of Endor, only to be saved by the Ewoks that lived there. Decades later, we now believe, she became the leader of the First Order Stormtroopers as Captain Phasma.

SW:TFA Who is Maz?

How terrifying – the idea that an innocent child such as this would grow up to become such a force for evil justice. As Twitter user Antoine Solo suggests, Cindel and Phasma do look rather similar. The actresses that play both characters look the same, that is to say. 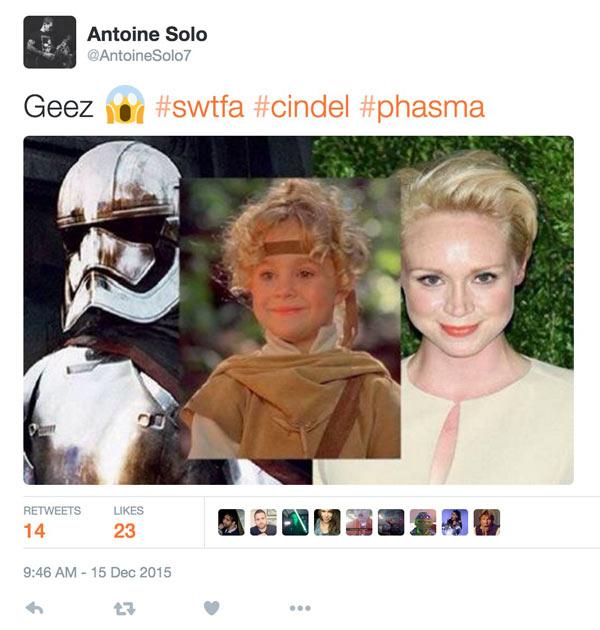 As Patty Boak brings to the attention of Pablo Hidalgo, we wonder if their ages match up.

Pablo Hidalgo retweeted this, which as everyone knows essentially confirms it – though we’re still awaiting final confirmation from Lucasfilm. Pablo Hidalgo is the author of the book: “Star Wars: The Force Awakens: The Visual Dictionary”, an official canon-friendly source of information.

Hidalgo also suggested that he’d “assumed the Ewoks cooked and ate her.”

Who is Captain Phasma?

Thusly, Cindel would have to be 36 years old to be Captain Phasma.

No official canon-friendly source yet suggests an age for Captain Phasma, not even The Visual Dictionary.

As such, we’re forced to assume that Phasma is literally the same age as the actress who plays her: Gwendoline Christie. If her IMDB-stated age is correct, she is just 37 years old.

BONUS: It would appear that Christie has retweeted the following video, which also confirms the “birth” of Phasma, thanks to creator “levellord”. (Video also embedded below.)

Also note: John Bierly suggested this connection all the way back in August of 2014. That’s intense! 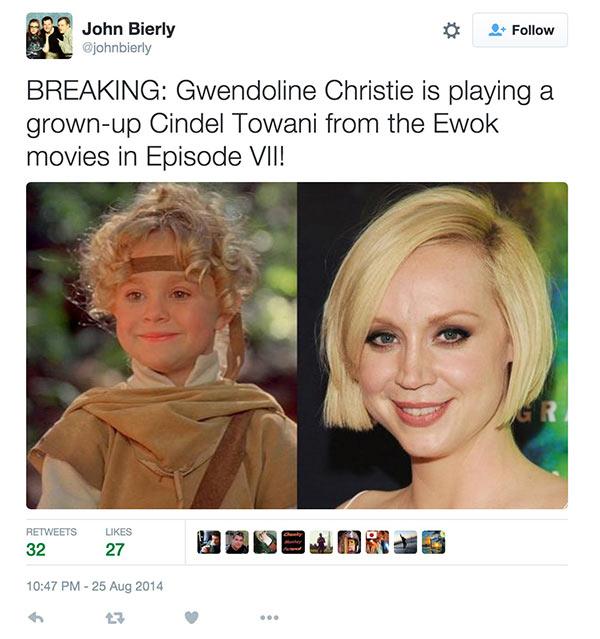 Could it be that she was one before the other?