Ultrabooks have undoubtedly been the star of CES 2012 this week – heck, we counted up the top contenders and found almost a dozen – but the slimline notebooks’ challenge is more than just shedding pounds and squeezing in as big a display as possible. For all Intel’s hard work pushing the trademark, and its manufacturer partners’ efforts coming up with their own slimline machines, the biggest threat to ultrabook success wasn’t even shown at CES. Apple’s MacBook Air.

The Air stunned users and wallets in equal measure in its first generation, but after its 2010 redesign – and with its significantly reduced price tag – it quickly became the ultraportable to beat. What started as an underpowered and overpriced novelty developed into a legitimate mobile companion, with enough grunt to do some light photo and video editing while not over-stressing your rucksack.

Now, I’m not saying Apple got everything right with the MacBook Air. Battery life from the notebook struggles to achieve Apple’s lofty claims, in my experience, and the company’s refusal to adopt USB 3.0 – plumping instead for Thunderbolt – would be a lot easier to stomach if there were more than a couple of accessories around to actually use the port.

But one of the big things the Air has going for it is that it did the ultrabook thing first. Apple may not use the term, and Intel tends to get evasive when asked whether it considers the smallest MacBook to fall into the category, but it’s inevitably become the benchmark for PC rivals.

Unfortunately most of them appear to have fallen into the obvious trap: make a Windows-based Air. Slimline dimensions, tapered edges, chiclet keyboards… Apple didn’t invent any of them, but glance at most of the aluminum-bodied ultrabooks launched this past week and it’s tough not to mentally compare it to the Air’s fifteen month old design.

Thinking differently was tough to find. Dell’s XPS 13 may have been comparatively late to the ultrabook market, but it at least threw some carbon-fiber at the design and made a good argument for it being there. The company has been able to use decent strength Core i7 processors, Dell claims, as carbon-fiber is better at shedding heat than aluminum is.

Slick, samey hardware alone isn’t enough, however. Part of the Air’s appeal is that only Apple’s machines get OS X: if you want the software, you have to buy the hardware. Windows machines don’t have the same advantage, and right now they’re generally all taking the same route: make an Air clone of some description and shout as loudly as possible

I’d love to see more competition in the ultraportable segment, but creating copy’n’paste Apple clones isn’t the way to do it. Rather than aping the MacBook Air, PC vendors need to focus on finding their own unique identify. Give me a reason to really, really want your product, rather than offering me photofit Windows alternative in the hope I’m not enamored of OS X. 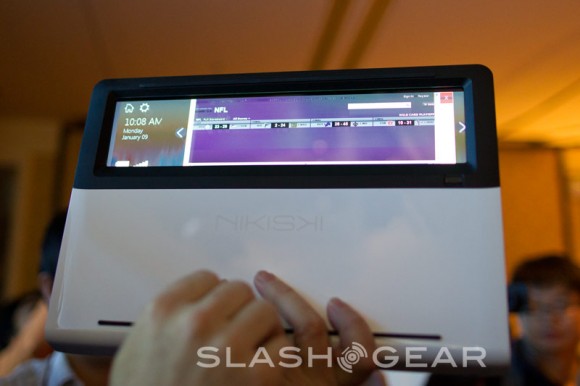 As is so often the case, the really unique designs were mere concepts – Intel’s own Nikiski, for instance, with its full-width transparent touchpad – at least trying something different, something dots Apple hasn’t yet joined up. Nikiski is interesting not so much for its eye-catching hardware, but for the use possibilities it opens up when you consider Intel’s other ultrabook technologies. For instance, how will day-long battery life and a visible-when-closed display work with Intel SmartConnect, which periodically wakes your notebook and refreshes your email, Twitter, Facebook and other messages?

Perhaps it’s expecting too much for manufacturers to address such questions today, though they’ve had years to rise to the challenge Apple represents. With fading PC sales – while MacBooks fly out of Apple Stores – time is running short to impress a gimmick-weary, cash-wary public. Based on what we’ve seen at CES this week, I’m still not convinced this latest litter of ultrabooks will be enough.

Convinced by Ultrabooks? Holding out for a MacBook Air instead? Let us know in the SlashGear poll: