Mac shipments rise 21% as PCs decline in the US

HP experienced the greatest decline in US PC shipments, dropping 26.1 percent, followed by Acer with an 11.4 percent drop, Dell with 4.5 percent, and Toshiba with 2.2 percent. Overall, the US saw negative 5.9 percent growth based on data taken from the fourth quarters of 2010 and 2011. Despite this, HP maintained its number one spot with over 4 million in shipments followed by Dell and then Apple in third.

Ultrabooks quietly crept in during the fourth quarter of 2011, but didn’t make much of an impact on PC sales. However, with the abundance of new ultrabooks popping up at this weeks CES show, 2012 will likely be a big year for this new crop of MacBook Air-inspired notebooks. However, Gartner expects PC shipments to be temporarily lowered in the first half of 2012 due to HDD shortages caused by the October 2011 floods in Thailand. 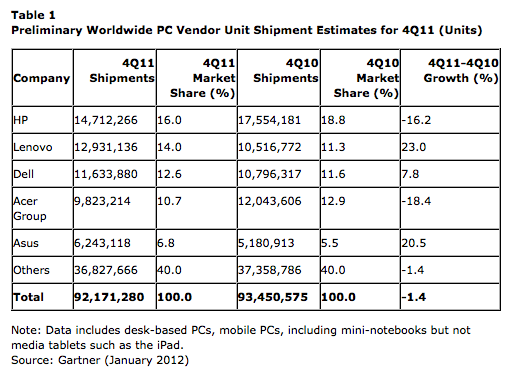