Tesla P85D to get 155mph unlock as range explained

Tesla will push out a firmware update for the Model S P85D and 85D dual-motor EVs in the new year which will boost the top speed to 155 mph and tweak the torque, while also addressing lingering confusion over range of the new cars. At launch, and like all other Model S versions until now, the P85D and 85D are electronically limited to 130 mph, but Tesla will nudge that cap higher and in the process match the limiter commonly found on most high-end sedans. However, while early reports suggested dual-motor drivers would in fact see improved range over the RWD cars, it turns out the reality is not quite so clear-cut.

The difference, Tesla points out, is down to how range is actually calculated. From the US EPA figures, which lump an “average” cycle into one, the new 85D tops the chart – or at least is expected to, when the EPA finalizes the numbers – with a quoted range of 270 miles. 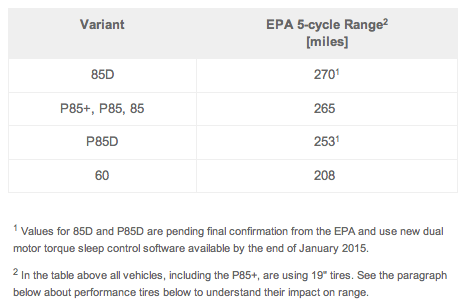 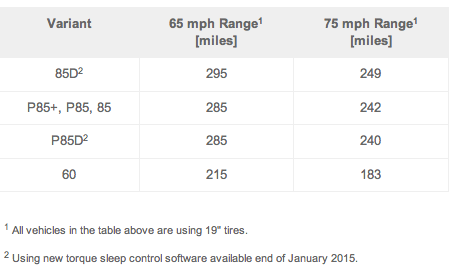 Helping there is one of a number of software tweaks that Tesla has in the pipeline. Expected in January 2015, a new torque sleep control system will switch one of the drive units into sleep mode when not required, waking it only when they hit the accelerator.

Similar to a stop/start system in a gas car, only so fast to enable as to be imperceivable to the driver, the system will contribute a roughly 10-percent improvement in range to the dual-motor cars.

Tesla’s numbers – and a selection of extra graphs plotting range against speed, available at the link below – demonstrate just how variable the situation can be. The P85D is, at some speeds, more efficient than its less powerful RWD counterparts; at other speeds, the reverse is true.

Of course, motor and battery selection aren’t the only criteria at play. 19- or 21-inch tires have a significant impact, too, in addition to factors such as how warm or cold the cabin is being kept, whether the windows are up or down, if the car is being driven at night or during the day, and even the exterior temperature.

Tesla has cooked up a new range calculator that tries to take some of those elements into account, though even then there are far more variables than can be comfortably encompassed, like luggage load, how many people are being transported, and more.

If range isn’t the key reason to upgrade to a dual-motor Model S, then speed might be: in an update due next month, the 155 mph limiter will be introduced.

“The P85D top speed is currently electronically-limited to 130 mph. In the coming months, we will be able to upgrade the car free of charge to enable a 155 mph top speed. This free update will be available for the lifetime of the car (not limited to the first owner). Additionally an over-the-air firmware upgrade to the power electronics will improve P85D performance at high speed above what anyone outside Tesla has experienced to date. In other words, the car will be better than you experienced. This free upgrade will be rolled out in the next few months, once full validation is complete” Tesla Motors

It’s not the only change, however. The power electronics will be modified, too, for what Tesla insists will be the most potent Model S experience so-far.

Will many Model S dual-motor cars actually be driven at such extremes? Perhaps only if a passing Lamborghini throws down the gauntlet, though the sheer boast-factor of an electric car out-performing its gasoline rivals might have more value for branding than on the road.

Last week, Tesla announced it would be offering Roadster owners an upgrade of their own, with a new battery system and aero kit promised for 2015. With it, range could potentially hit 400 miles the company claims, though it’s yet to explain how much the new hardware will cost.