Tesla has detailed Autopilot version 8 for the Model S and Model X, with CEO Elon Musk explaining how it’ll make better use of existing radar sensors in ways that could prevent a fatality like that experienced earlier this year. The much-anticipated update was developed in-house rather than Tesla collaborating with Mobileye, as the automaker suggested in August would be the case moving forward. Most critically, Autopilot version 8 makes far greater use of hardware that’s already widely installed on Tesla’s cars.

The radar system was added as a standard-fit component to all Tesla cars manufactured from October 2014 onward, though its role until now has been fairly minor. Indeed, Tesla’s initial expectation was that it would serve as a supplementary sensor, with the primary camera and corresponding image processing system still the central source of Autopilot data.

Back in July, though, Musk teased that new implementations of the radar could, in fact, see the sensor take a far more prominent role. That refinement would help avoid the significant expense of LIDAR laser scanners, which have been widely used on autonomous vehicle prototypes but are currently prohibitively costly for production cars.

Autopilot version 8, though, will do something similar – and, indeed, Musk argues better – to LIDAR only with far more affordable radar. 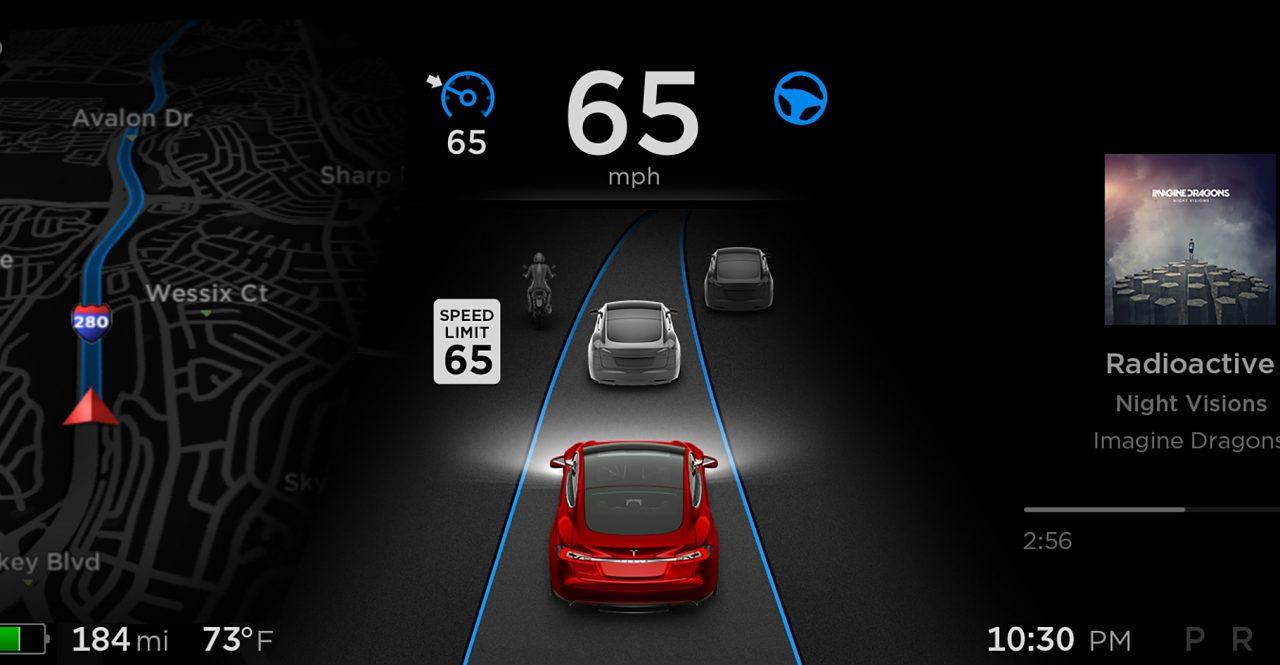 Using radar in this new way is tricky, Tesla highlights, because it can be easy to trigger a false-positive for an obstacle ahead. People are seen, though only as translucent objects; wood or painted plastic objects aren’t seen at all.

In contrast, metal objects are visible, but how they’re seen by radar sensors is heavily impacted by their shape. Most notably, if they’re concave that will amplify the returned signal from the radar, making any object look much bigger than it actually is.

Indeed, Tesla points out, even the base of a soda can on the roadway could look so huge to traditional radar that, if the car was relying on that sensor alone, emergency braking could be triggered.

“Slamming on the brakes is critical if you are about to hit something large and solid, but not if you are merely about to run over a soda can,” Tesla points out. “Having lots of unnecessary braking events would at best be very annoying and at worst cause injury.”

The fix for that comes in several stages, and so Tesla’s implementation of radar will roll out progressively. First up is an eight-fold increase in information sourced from the radar sensor, building up a far more accurate point cloud of the environment around the car. By combining those snapshots, taking once every tenth of a second, a 3D model can be created: Tesla’s software then looks for movement within that model, to help ascertain whether something really does present a possible accident risk.

All that works well if the road is level, but not so much in the real world where there are dips or rises that bring road surface or overhead highway signs into the radar’s path. Since GPS data isn’t sufficiently detailed to include those changes in orientation, Tesla has to supplement it with other information.

As every Model S and Model X is connected to Tesla’s cloud, fleet learning can fill in that gap. The first stage of Autopilot version 8’s implementation will be for cars to spot and record any road signs, bridges, and other stationary objects to build up a real-world map that’s shared by all vehicles.

“The car computer will then silently compare when it would have braked to the driver action and upload that to the Tesla database,” Tesla says. “If several cars drive safely past a given radar object, whether Autopilot is turned on or off, then that object is added to the geocoded whitelist.”

The result, Musk says, is a system that can “almost entirely eliminate false positives, false braking events.” Indeed, the CEO predicted that people could see as few as one false positive over five years of driving.

How the emergency braking will be experienced to those in the car will depend on whether Autopilot is active at the time or not. The system will indeed kick in if the driver is operating their Tesla manually, but it’ll act as an emergency braking mode. It’s more likely to mitigate crash speed as, Musk explains, “if Autosteer is not on, it doesn’t know if the driver is going to turn out of the way of the obstacle or not, so it’ll only brake at the last moment.”

If Autopilot is on, the experience will be far smoother, Musk says, as the car will be able to steer itself.

Interestingly, Autopilot version 8 will also be able to effectively see what’s ahead of the car in front by bouncing the radar under and around that vehicle. “Even if there’s something that was obscured both in vision and radar, we can use the bounce effect of the radar to look in front of that car and still break,” Musk says.

Radar is clever stuff, though as Musk points out it’s not infallible. Indeed, it’ll be able to spot an obstacle “as long as it’s not large and fluffy,” which suggests pets are still going to be at the mercy of the camera system.

“It should work for something like a moose,” Musk predicted, “a moose is quite a big mass. It may not work for, say, a small deer. A small deer would probably not trigger braking … We have a lot of customers in Canada where there are moose-sized creatures, so I think we’ll probably get a bit of information on that. You definitely want to brake for a moose.”

It’s not been smooth sailing for Autopilot. Though Tesla is arguably ahead of its automaker rivals for semi-autonomous and driver assistance technology – at least when it comes to getting that functionality out and onto the road – it’s also found itself at the center of a number of safety concerns.

Earlier this year, a high-profile crash where a Model S using Autopilot failed to see a truck crossing the highway in front of it, the driver, Josh Brown, dying in the resulting impact, led to demands by some that the technology be disabled and renamed.

Evidence from the incident pointed to the driver being unduly distracted when the crash took place – even watching a movie on a separate DVD player while the Model S steered itself – and Musk underscored the idea of the system being intended for assistance not replacement of human attentiveness.

Instead of backing off, though, Tesla has only refined Autopilot. In addition to greater use of the existing radar sensor, version 8 will also give more space to another car when overtaking it, if that vehicle is close to the edge of its lane. There’s reduced likelihood of overtaking in the right lane in Europe, and greater availability of auto lane changing overall.

The Tesla will also be able to take a highway exit if the indicator is on, or – as of version 8.1 – even if just the navigation path suggests that’s the next route change. Initially only those in the US will get that feature, mind.

For every location, automatic braking ramp rate and latency have been improved by a factor of five, and the automatic braking will also amplify the driver’s own braking during emergencies. Curve speed adaptation will take advantage of fleet learning to better understand the path of the roadway ahead and, eventually, the car will activate Autosteer itself when there’s a 100-percent probability of a collision.

In manual mode, the car will also alert the driver if they’re about to leave the road and no torque has been felt on the steering wheel after deactivating Autosteer.

Meanwhile, Tesla is also making the ways Autopilot communicates with the driver more visible. There’s a new flashing white border to the digital driver display if the UI needs to get the driver’s attention, while ignoring alerts will be treated more seriously.

“If the driver ignores the audible alarm more than three times in an hour,” Musk explains, “the driver will have to park and restart in order to re-enable Autosteer.”

That’s in part because, the CEO says, contrary to the belief by many that Autopilot-related accidents are experienced by those new to the system, it’s actually those who get too comfortable with their Tesla taking control that are most at risk.

Even with the improvements – which Tesla says will continue to improve as the fleet-learning process continues, currently racking up 1.5 million miles of data a day – the automaker is keen to point out that it’s not infallible.

“This does not mean perfect safety,” Musk cautions. “Perfect safety is really an impossible goal. It’s really about improving the probability of safety, that’s the only thing that’s really possible.”

Still, Tesla’s Musk says the improvements in Autopilot 8 make the car roughly three times safer than a vehicle without it, and indeed would have been sufficient to prevent the death of Josh Brown in the July crash.

“We believe it would have,” Musk said. “It would see a large metal object across the road, and, knowing that there is no overhead road-sign in that position, that would therefore not be a whitelisted situation and impact probability would be assessed as high and so it would brake.”

As for rival automakers opting to skip Level 3 autonomy technologies in the hunt for more flexible Level 4 systems still expected to be a few years out from primetime, Musk is definitive.

“I think it would be morally wrong to withhold functionality that improves safety simply to avoid criticism or to be embroiled in lawsuits,” the outspoken CEO concluded.

Autopilot version 8 is around 1-2 weeks from being pushed out to Tesla drivers worldwide via the over-the-air update system.