It’s time to get your T-Mobile iPhone 5 party started with T-Mobile’s own NanoSIM made specifically – since there’s no other phone that uses it – for the current-generation Apple smartphone. What we’re seeing today is the NanoSIM in a set of T-Mobile stores across the USA – the one you’re seeing in this post appears to have been sent out – or at least printed – near the end of September. With these NanoSIM cards users will be able to plug their non-carrier-specific iPhone into the T-Mobile network for big pink connectivity across the USA.

This release was spoken about even before the iPhone 5 was revealed for real just weeks ago. T-Mobile has made an effort to stay in the Apple universe even though they themselves do not carry the iPhone 5 officially, with plans and advertisements aimed directly at the smartphone that Apple has still not given them the pleasure of working with. This is an unprecedented effort, as you may have guessed, with carriers generally only advertising their support of smartphones they’ve also got for sale in their stores and on their network right out of the box. 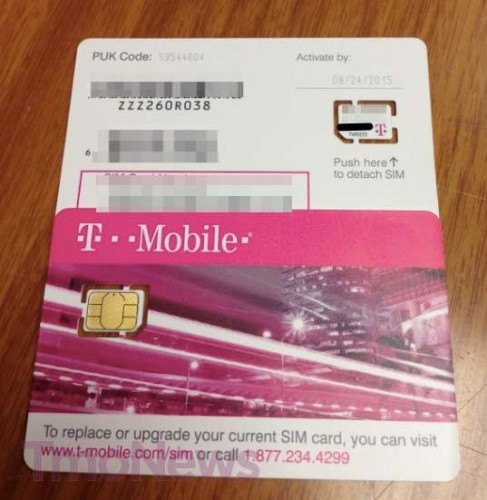 Apple is a special case, of course, with the iPhone still sitting pretty at the top of the smartphone sales charts and the iPhone 5 showing itself to be a winner with millions of orders being filled before the device even hit stores. Now that the device is literally sitting in Apple stores across the nation for purchase, T-Mobile wants – and perhaps needs – to get their connection on. They mustn’t be left in the dust on this one.

Meanwhile T-Mobile continues to release a barrage of Android smartphones and will soon be amping up their Windows Phone 8 collection as well. Stay tuned to T-Mobile’s tag here on SlashGear too to see if they’ll end up really merging with MetroPCS to bring LTE to their network and continue their spread across North America with a pink fury. Also be sure to check out our full iPhone 5 review to know what you’re getting into!