The Syrian Electronic Army strikes again, and this time, their target was both E! Online and Justin Bieber. In a series of tweets, the SEA stated that Justin Bieber was coming out of the closet and admitting to his homosexuality in an E! Online exclusive. The group provided links following those tweets, presumably to malware infested sites. The SEA finished up their practical joke with the tweet, “The Syrian Electronic Army was here! Fans of @justinbieber, you have been trolled.”

The fake tweets resulted in a huge wave of responses from Justin Bieber’s followers. Many were shocked, many were “not surprised”, and many were indifferent. Hacking E! Online is a strange change of pace for the Syrian Electronic Army, who normally goes after news publications and human rights organizations. But its attack was foreshadowed with a recent tweet dated May 1st that said, “The next target will be different…” 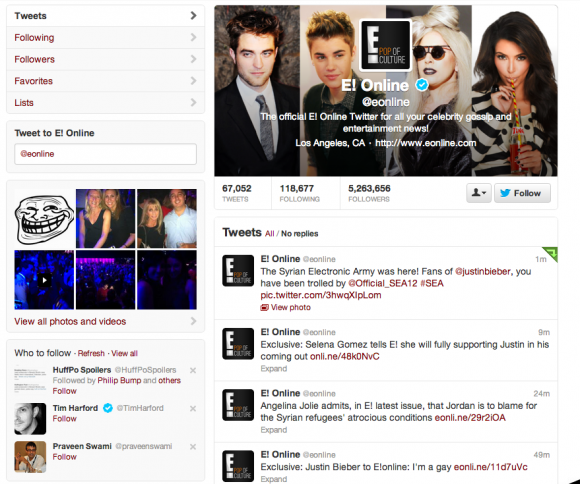 E! Online is the latest victim in the Syrian Electronic Army’s attacks, but it most certainly isn’t the last. Twitter knows that as well, and has informed everyone to make sure their password is complicated and secure, and that news publications keep their passwords out of their emails. Twitter recently went to battle with the SEA by deleting their Twitter accounts, but seeing as Official_SEA12 is still up, Twitter probably assumed their attempts were futile.

Twitter is also in the process of developing a two-factor authentication system that should dramatically reduce the amount of account hacks, but the company has yet to reveal a launch date for the service. The SEA has already targeted many other accounts, such as several of CBS’s accounts, BBC’s accounts, NPR’s accounts, The Guardian’s accounts, and many more. It won’t be too long now before another group is added onto the list.