SwiftKey for iPhones and iPads to launch September 17

Hope you haven’t had your fill of Apple and iPhone 6 news just yet, because here’s yet another one. SwiftKey has just booked a date on your calender when its popular third-party keyboard will be arriving on Apple’s devices. Starting 17th of September, SwiftKey will be available on iOS for the iPhone, the iPad, and even the iPod Touch.

Third-party keyboards have proliferated and thrived on Android because of the variety of customizations and, more importantly, convenience and learning abilities that they offer. One of the surprise revelations that Apple made when it unveiled iOS 8 was that it would be opening up its platform to similar apps. Naturally, SwiftKey, one of the more popular names in that market, was quick to the scene.

SwiftKey offers your usual assortment of autocomplete and autocorrect, the latter both a boon and a bane on any keyboard, that you might find in other similar apps. Autocomplete lets you fill out a word in a single tap, and autocorrect should be smart enough to know what you really mean and fix what it thinks are typos. Of course, that is all based on learning from the user’s own typing habits, and that is where SwiftKey puts a twist. 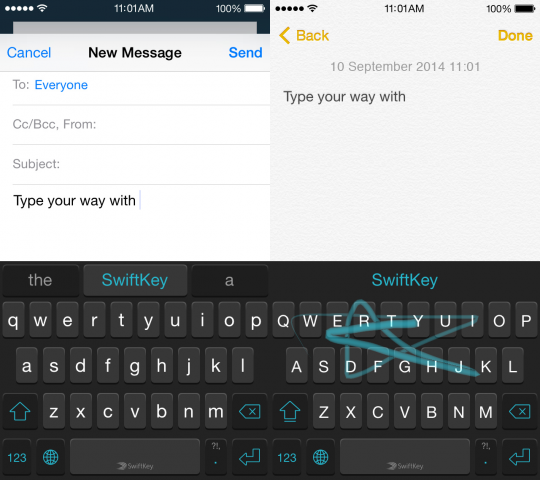 Its SwiftKey Cloud, which requires signing up for an account, is more than just a convenient way to have your customizations and “personal dictionaries” synced across devices, theoretically even across Android and iOS as well. SwiftKey Cloud also learns your language based on what you’ve already put up there in the cloud. To be specific, it can comb through your Gmail, Facebook, Twitter, and Evernote data to better learn your typing preferences, most used words, lingos, and idiosyncrasies. This definitely gives SwiftKey an edge over others as it has a bigger data pool to learn from. It might also raise some flags from privacy and security conscientious users.

SwiftKey prides itself in the number of languages it supports, but in its iOS launch, which happens on the 17th, it will initially start with English (UK, US, AUS, CA), Portuguese (PT, BR), French (FR, CA), German, Italian, and Spanish (ES, US, Latin America). The feature set for all supported Apple devices will be practically the same save for one. SwiftKey Flow lets you type by swiping across the keyboard, ala Swype. However, that feature will only be available on the iPhone and the iPod Touch, leaving iPad users with only the conventional way of tapping out words.