Microsoft CEO Steve Ballmer has reiterated the company’s new commitment to hardware, suggesting that it will “dive in” when “opportunities to set a new standard” arise. Speaking to the BBC, outspoken Ballmer confirmed what he had previously hinted at in a letter to shareholders earlier this month, a “fundamental shift” of Microsoft’s attention from primarily software to a combination of that and the hardware it’s used with. The first significant example of that is Surface, Microsoft’s Windows RT tablet, but it won’t be the last.

Microsoft’s decision to launch a Windows 8/RT tablet of its own led to some surprise among OEM partners, especially given the fact that extreme secrecy meant that the notice each was given amounted to a couple of days. Now that Surface is out of the bag, however – our full review of the Windows RT model is here – Ballmer seems less reluctant to talk device plans.

“Is it fair to say we’re going to do more hardware? Obviously we are” the CEO said. “Where we see important opportunities to set a new standard, yeah we’ll dive in.” 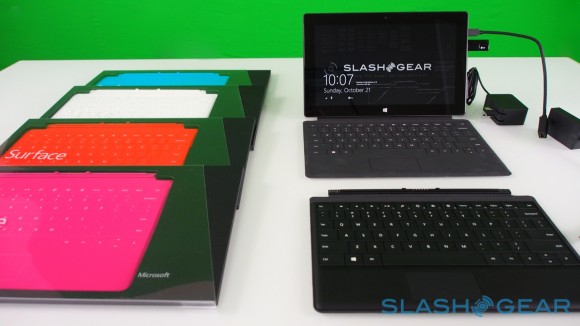 A shift in focus was presented as essential if Microsoft was to be nimble against rivals – and at the forefront of the minds of its OEMs – Ballmer told investors. “There will be times when we build specific devices for specific purposes, as we have chosen to do with Xbox and the recently announced Microsoft Surface” he wrote, with echoes of Google’s Nexus program to position Android phones and tablets that epitomize what the company believes is the best direction for the platform as a whole.

Exactly what will come next is unclear, however, though with the obvious effort and investment Microsoft put into developing Surface hardware – efforts highlighted by ex-CEO Bill Gates in a separate interview this month – it seems unlikely that the firm will be content to settle back to keyboards, mice, and webcams.

“We have committed ourselves on a path where we will do whatever is required from both a hardware and a software innovation perspective and the cloud innovation perspective,” Ballmer teased, “in order to propel the vision that we have.” The proof of the pudding will be in the eating, however, with Microsoft yet to reveal preorder figures for Surface.