Six Star Wars films have been re-released in Blu-ray form in two editions, one of which is the Steelbook set we’re reviewing today. These movies are available individually, each in their own heavy-duty metal and plastic container, each with a single Blu-ray inside. There’s also a “Complete Saga” Blu-ray set that includes a whopping 9-disc collection, full of extra features and commentary tracks. You COULD also purchase the Blu-ray disks in two 3-disc sets, one original trilogy, one prequel trilogy.

What are my options?

Dear relatives of Star Wars fans looking for holiday gifts: are you confused yet? We’re going to try to break this all down to make it simple. First, you’re going to want to figure out what your relative (or friend, or co-worker) already owns.

It’s not imperative that they don’t receive the same content they already own – chances are they’ve already seen Star Wars. What is important is to discern whether you’re paying extra for something they will or will not appreciate. 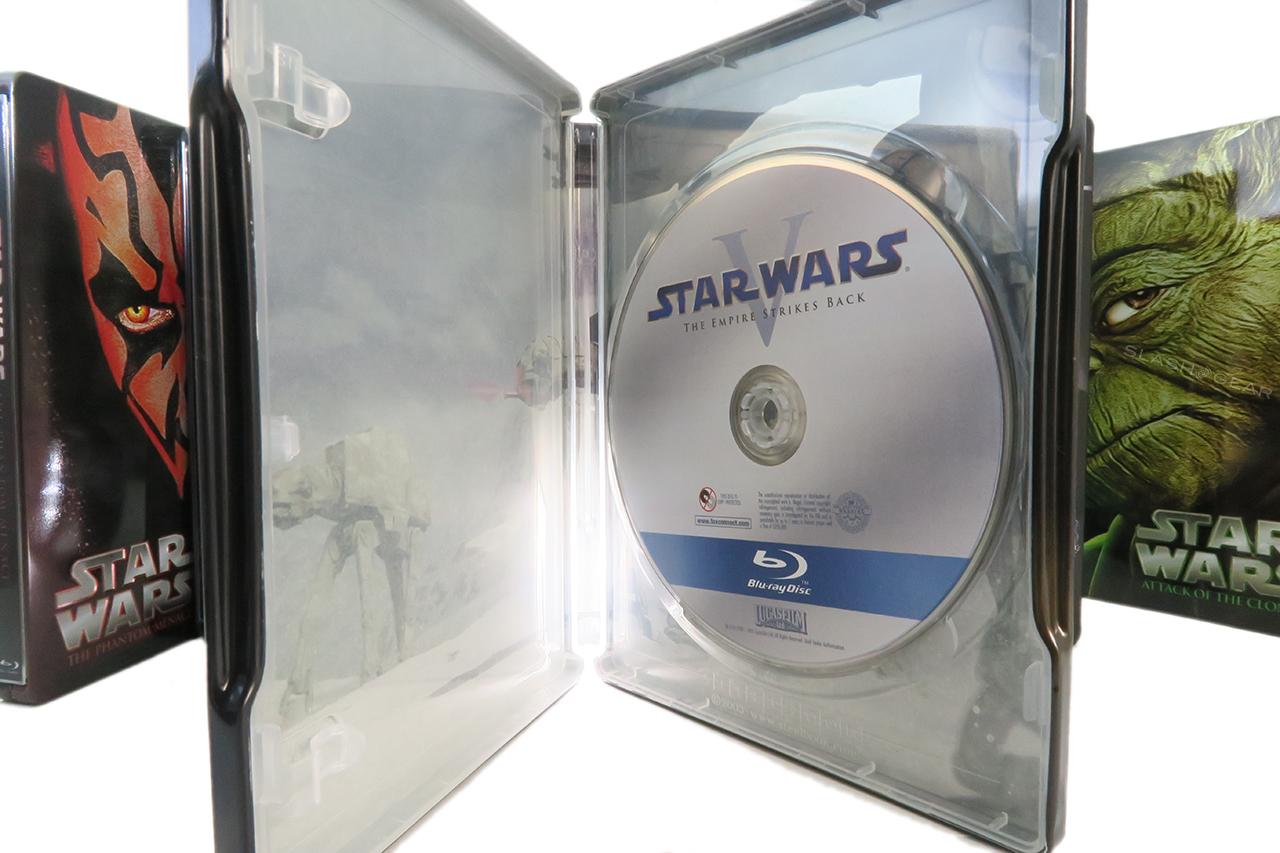 ABOVE: While the Steelbook editions do not have any paper material inside their cases, they do retain the clips, just in case you’d like to transfer material from older versions of the films for safe keeping.

Earlier this year Lucasfilm and Disney released the full Star Wars film collection on Digital HD. This means you could buy each movie (and their extras) from places like Apple and Google, and you’d have the files to play the movies on your computer.

They also released basic editions of the Blu-rays, and the DVD versions of the films have been out for several years.

If the person you’re buying this collection for has all the films digitally, purchased earlier this year, they’ve already got all the extras. There’s nothing available in the Blu-ray release of the full collection that isn’t already out via digital stores.

Thus, the options are these:

*Each of the films in the Star Wars Steelbooks collection has SOME special features, just not ALL special features. You do not get any additional footage beyond the main film on each disc, but you DO get commentary. Commentary includes words with George Lucas and the film crew on one track – and on another track, an awesome collected mash-up of audio commentary from archival interviews with the cast and crew.

To be fair, all of the “special features” content you’re finding here HAS been released previously.

That’s not to say that the mash-up archival commentary track isn’t excellent. You’d have to spend days, weeks, months finding all the content they have in these commentaries. The result is a radical presentation we’ve not had before laid on top of a collection of films we know and love.

The metal is strong. The Metal isn’t going to bend on you if you accidentally drop it on to concrete. You might get a ding in the ink of the graphics, but you’ll be fine for the most part. 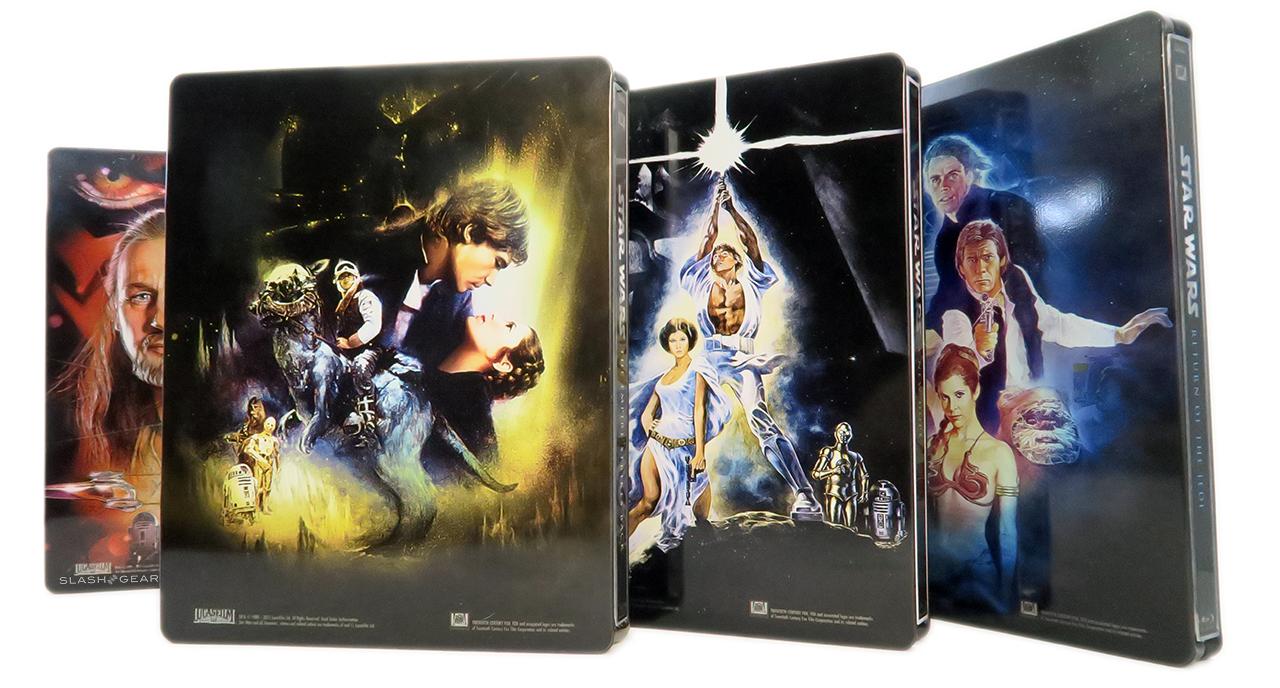 The artwork is great. The images are familiar, yet new, while the backs have shiny versions of a set of classic film posters.

These containers are a combination of hard metal and bounce-friendly plastic. The people responsible for making these cases know all too well what happens when you make a metal box that’s too brittle – it breaks. These boxes are made to last.

If you’ve never experienced Star Wars on Blu-ray, you’ve not seen the best picture and sound combination available today. While the ultra-hardcore original-style fan might still be seeking an original print of the movies on non-digital movie film, the most crisp and clean presentation of the films yet released – all of the films – are here. 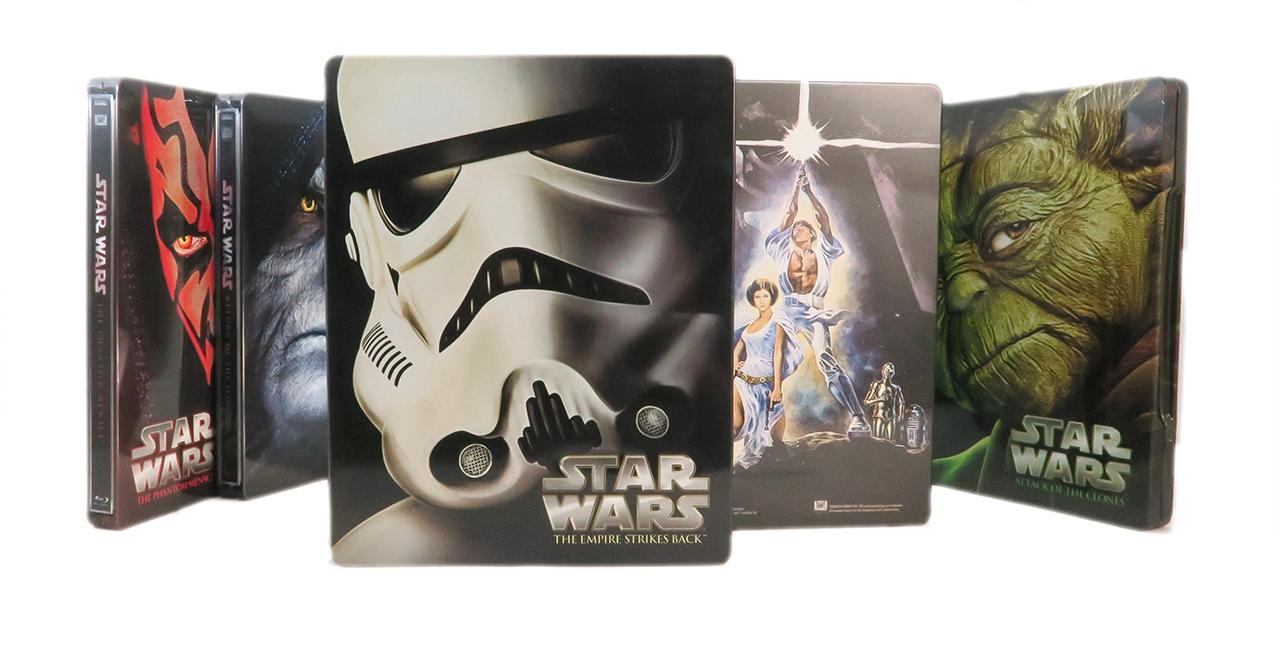 The movies are – as far as we’ve been able to tell – the same as they were when released digitally earlier this year. That means you’re going to see Jabba the Hutt at the beginning of A New Hope, speaking with Han Solo.

It means that Greedo AND Han shoot first (basically at the same time).

It means that if you want some sort of digital release of the original films, you’re still going to have to head back to LaserDisk – and may god be with you on that venture. We’ll just keep messing with Harmy.

NOTE: The picture quality is very likely the same on the other two Blu-ray releases of the film collection as noted above, but we have yet to test them out for ourselves – so do so at your own risk! (Chances are there’s no risk at all)

The release of these Blu-rays in a set of Steelbox presentation containers is no coincidence. The holiday gift-giving season approaches and the first of a series of new big-screen Star Wars films is about to be released. Lucasfilm and therefor Disney stand to make large amounts of money from your willingness to purchase the same films over and over again. 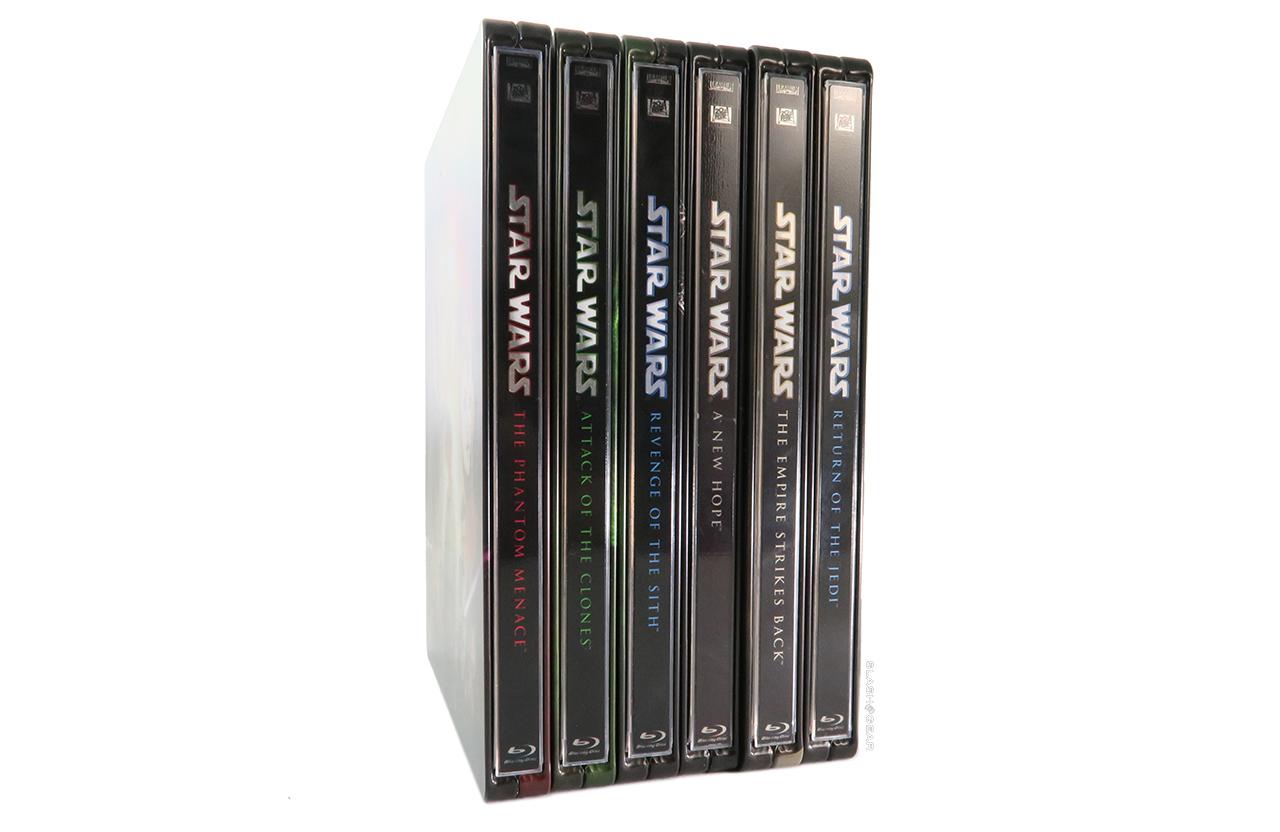 That said, for a Star Wars fan, these films never get old. Even if your niece has the original trilogy on DVD, these Blu-ray discs will be an awesome upgrade. Even if your best buddy Frank has the full collection of films on his Google account to watch on his phone, you’re not going to be able to go wrong giving him a set of Star Wars Steelbooks with Blu-rays inside.