There’s a smartwatch war going on right now – did you know? With the SmartWatch 2, Sony reminds the world that they’ve already been in the market for a generation, with months of head start going in an unbroken line of evolutionary products (even if it’s just two) that lead to today’s wearable. While the Sony SmartWatch 2 was largely overshadowed this year by the Samsung Galaxy Gear and the smartwatch known as Pebble, the mission we’ve got before us today is deciding if this wearable is up to the task of taking on those other similar wrist-bound computers, both large and small.

Of the smartwatch devices on the market today, the Sony SmartWatch 2 is certainly one of the more comfortable. While the Samsung Galaxy Gear appears massive by comparison and Pebble appears extra-minimal, Sony’s device relies on a standard black, flat watch design for aesthetic simplicity.

You’ll also find that the Sony SmartWatch 2 works with a universal 24mm size for straps – the same as Pebble. You can use a wide variety of straps from your own odd drawer of accessories, while the most standard band is comfortable enough to be able to forget about while wearing for hours on end.

This device works with four buttons and a touchscreen. You’ve got one physical button that replicates the circular button on the Sony Xperia Z collection of smartphones released throughout 2012. This device also shares another ability of the Xperia Z – water resistance. That’s not waterproofing, mind you, you’ll have the word “splashproof” to guard you as well as IP57 water resistance – that’s good enough for the rain and an accidental drop in the snow, but not quite snorkeling.

This resistance to H2O works when this machine’s USB cover is closed. You’ve got a flap that keeps the micro-USB connectivity of this device from harm, one that blends in rather well with the device itself and allows you to have a relatively seamless look while you retain the universal connectivity that some of the SmartWatch 2’s competitors lack. 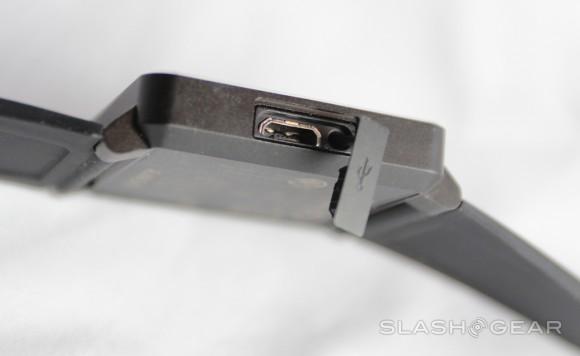 The front-facing capacitive buttons as well as the touchscreen are perfectly usable and responsive and work well with the device’s user interface for what it’s worth. The process of pressing more than a single button to enter the UI feels a bit unnatural. Then again supposing you’re getting into the smartwatch game having never before worn such a device, you’ll be expecting to have to get used to such oddities.

Once you’ve moved past the initial screen – which, by the way, works with time and the date with the newest update to the system at the start of December 2013 – you’ve got a set of mini-apps. Most of these apps connect to your smartphone which, incidentally, is required for most of the functionality of the watch. This isn’t a stand-alone smart device, after all – it’s meant to be used as an extension of the smartphone you’ve got in your pocket already. 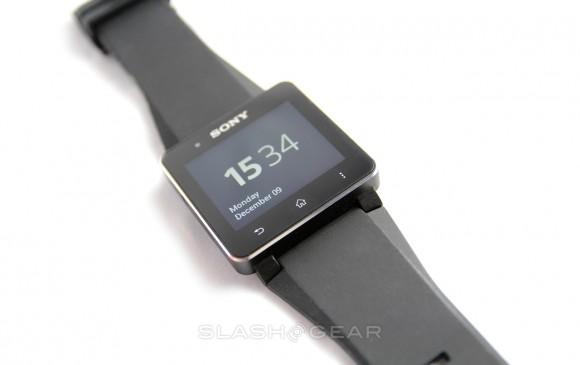 Time and date work without your phone, as do the flashlight, stopwatch, alarm clock (with vibrate to wake), and basic settings. You can change the faces of the watch, set up security (a pin code for the watch), and change the brightness of the watch’s display.

Without exploring 3rd-party apps and connectivity with the smartphone, this device’s abilities are very basic. It’ll do the duty of a normal, everyday watch with a few bonuses just fine, if that’s what you’re in the market for.

Once you connect the device to your smartphone, everything starts to light up. You can see incoming phone calls and decide to answer or dismiss them from the device itself. You can see text messages and Tweets from Twitter – though you wont be able to do much with the links therein. Twitter is also presented in full color – you won’t find much other than the user icons coming up that way, but it does feel a bit more advanced than just seeing it all in blacks and whites. 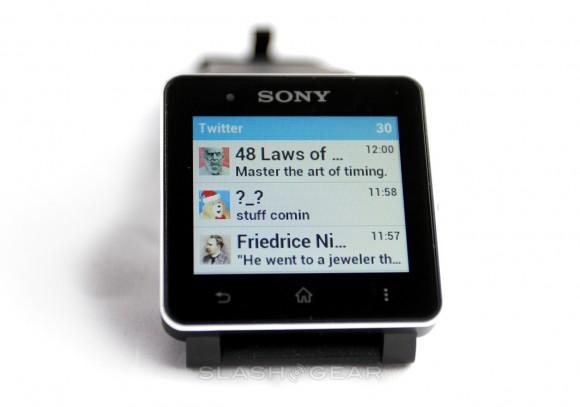 The Facebook app is very similar to the Twitter app in that it’s mainly about notifications, while images and real interactivity remains on your phone. Most of the impressive bits and pieces in these apps lie in connecting with the phone – there’s a set of “control center” apps out there, for example, that can toggle your smartphone’s Bluetooth, Wi-fi, Sound, and etcetera. 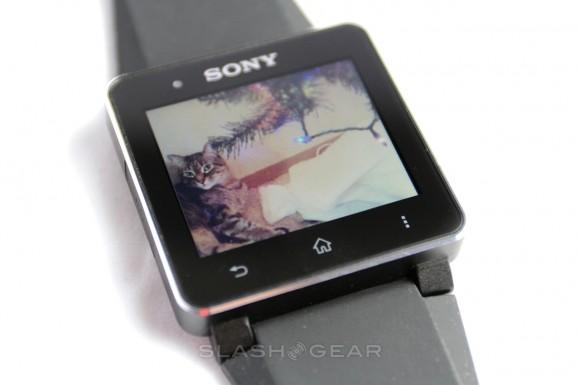 There’s also a set of apps that are able to remotely control and view through your smartphone’s cameras. You can use these apps – Sony even offers one for its Xperia smartphones specifically – to take simple group photos of you and your family or you can use them to set your smartphone up as a spy cam. It’s the viewfinder on the watch itself that seems most magic. 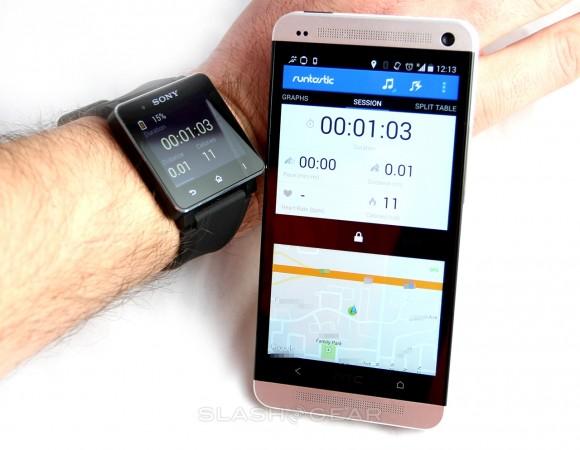 There’s a Runtastic basic and Runtastic Pro app for the Sony SmartWatch 2, the latter shown off in our Software hands-on video. There you’ll see how this app is able to use the sensor abilities of the watch itself alongside the smartphone to capture an in-depth analysis of your running sessions. Once you tap in and back out after a run, your smartphone immediately has all the data you’ve collected, ready to share or save as you wish.

You’ll find a Tasker app – one of the more essential “must have” app connections in today’s smartphone war. If you want your smartwatch to appear to be able to do anything, you need Tasker. We’ve found tapping to activate actions on the smartphone with this device to be very satisfying. Now if we could only find a set of use-cases to make it all worthwhile. 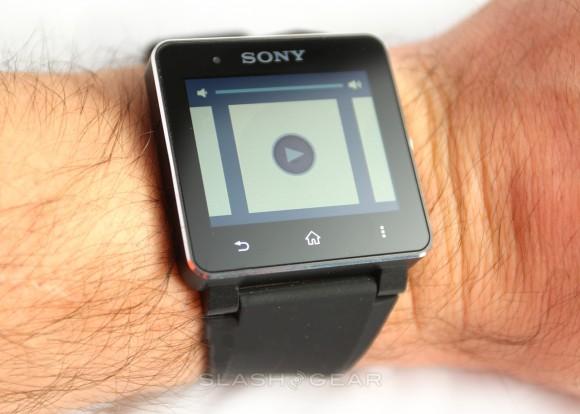 Music control is also extremely simple to use, working with just about as simple an interface as possible – swipe to change tracks, tap to play or pause. That’s it. The music control app provided by Sony is almost shockingly simple considering the competition – even Pebble has more than one music control app in the wild with more extensive controls, or at least more extensive information on the songs being played on the device. On the positive side, you do get to choose which music app you control by default.

The Sony SmartWatch 2 works with a 1.6-inch 220 x 176 pixel LCD touchscreen – aka 176.09 PPI (pixels per inch). You’ll be able to see the pixels across this machine’s face. Especially when you’re working with a current-gen device like the Sony Xperia Z, what with its 443 PPI, there’s quite a bit of a gap in sharpness there. 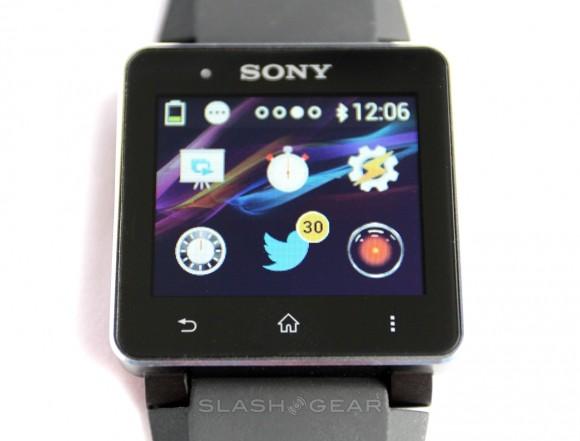 This relative lack of pixels allows the Sony SmartWatch 2 to be significantly cheaper than it’d be with a far more sharp display. It’s interesting to see Sony stick with such a low-resolution display after having released a first-generation device with a similar display in the recent past – they must know something we’re unaware of in this department: watch-wearers must not care quite as much about the relative sharpness of their wrist-bound displays as we’d expected. 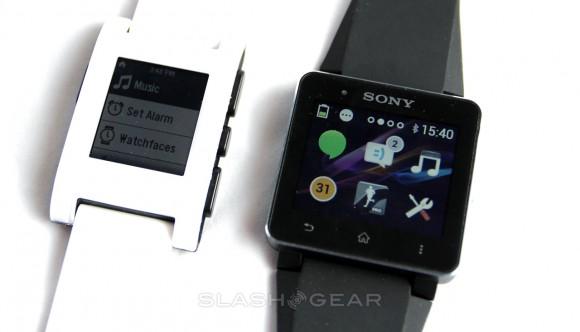 The 1.64-inch display of the Samsung Galaxy Gear works with a cool 275 PPI while the Pebble’s 1.26-inch display kicks out 139 PPI and the Qualcomm Toq’s 1.55-inch display works with 223 PPI. Beating out Pebble’s e-paper display by a tiny bit of sharpness while falling short of both Samsung and Qualcomm’s entries puts the Sony device in an acceptable place at the moment, but not one where it’ll beat out the competition on its own.

While battery life very much depends on how often you tap the device, the Sony SmartWatch 2 runs a cool 2-4 days on average. That’s a relatively large range given the distinct times we’ve seen with the competition thus far. The Galaxy Gear runs for a day with good luck while Pebble runs for 5 days without effort (we’ve yet to extensively test the Toq in this regard).

It’s really all about keeping the watch as a simple notification sender – 4 days of use – or as a music controller and camera controller for hours on end – closer to 2 days of use. Having the SmartWatch 2’s display on for extensive periods will really be the machine’s biggest battery killer, as it is with most devices with color panels.

Up Against the Competition

Here at SlashGear we’ve had some wildly varied experiences with smartwatches over the past year. While some swear by one model, others wouldn’t touch any smartwatch at all – with any of their appendages. Those that’ve found the smartwatch wave to be engaging have sought out the Sony SmartWatch 2 as the most well-balanced of this era of wearables – if you’re balancing between simple watch and sheer outward impressiveness in specifications. 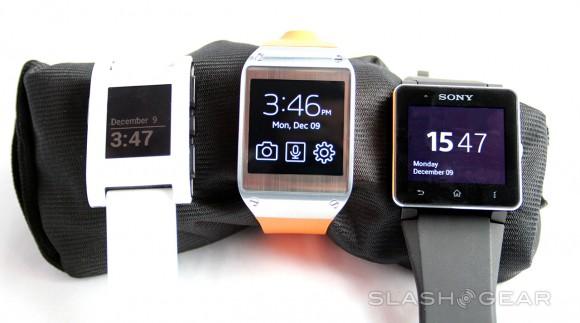 While some users might find Pebble to do everything they need with a simple black-and-white display, the Sony SmartWatch 2 provides the full-color experience that suggests a more “do it all” device. Of course it’s all relative – you still can’t do a whole heck of a lot more on a display this size, with or without touch functionality, with or without color.

The Sony SmartWatch 2’s UI is more or less the same as the Samsung Galaxy Gear – both are very much attempting to replicate the familiar Android look and feel at their base. The Sony SmartWatch 2 isn’t running Android, on the other hand, so don’t expect to hack it and play Angry Birds any time soon.

Still, the Sony SmartWatch 2 may be the biggest competitor alongside the Pebble for universal smartphone connectivity and consumer aim. You wont have iOS connectivity with the SmartWatch 2, but you do have the closest thing to a miniature smartphone here without being limited to a Samsung smartphone (as is the case of the Galaxy Gear) or created more or less as a developer device (as is the case with the Qualcomm Toq). So consider that if you’re an Android user.

Pricing in check, we’re still not entirely convinced this is an investment worth making unless you’re really, truly in the market for a smartwatch and don’t plan on leaving the store without one. The Sony SmartWatch 2 is certainly an intriguing toy, but after all, that’s all it really is (for now).