Sony PlayStation EyePad could bring 3D control to the PS4

Sony is experimenting with a tablet-style PlayStation controller, codenamed the EyePad, which would allow dynamic 3D motion control and virtual buttons for gaming and other purposes, according to a 2012 patent filing. The application, spotted by Gamechup, for “Input device, system and method,” describes a “panel, tablet or slab-like device” that would build upon the motion-tracking abilities of the PlayStation Move by creating a virtual interaction area above the slate – using a stereoscopic camera array – within which individual finger, hand, and object movements could be incorporated into gameplay.

As Sony describes it, the EyePad would be a broad, flat, slimline tablet with illuminated edges. Those lights would be used in a similar way to the Move’s motion-tracking, with the EyeToy camera accessory currently used with the PlayStation 3 relying on the illumination to pinpoint the EyePad in 3D space. Various physical controls could be dotted around the periphery of the fascia, optionally flanking a central touchpad area.

However, actually making physical contact with the touchpad wouldn’t be necessary. Sony envisages a pair of cameras – similar to those you might find in a smartphone – looking out of the tablet, and by using stereoscopic 3D algorithms, capable of tracking the movement of an object or objects in the space above the EyePad. 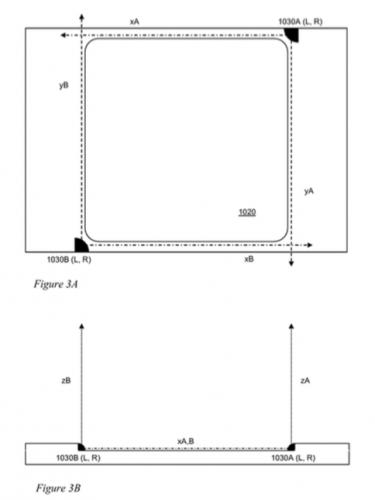 That movement could be of a finger, or of a whole hand, or indeed it could be of an object or shape that was held in the space above the EyePad and manipulated. Altogether, then, the peripheral would be able to funnel a vast quantity of data back to the PlayStation over Bluetooth: the absolute position of the EyePad itself in the room; the relative orientation of the EyePad in six axes, gathered from onboard motion sensors; the location of any contact points with the touchpad surface; the appearance/3D shape of objects in the space above the EyePad; and the status of any physical buttons or sticks scattered around the device.

As Sony suggests, the possibilities for utilizing all that data are near-endless. In the EyePets game, for instance, the EyePad could serve as a virtual grooming station: users could hold out the slate for their virtual pet to “jump up” and then, by miming stroking and brushing it, interact more naturally with the on-screen animal. A physical shape – perhaps a toy animal – could als be used to manipulate the on-screen representation; or, the EyePad could allow user avatars to be browsed through and viewed in 3D.

Another idea is a virtual fishtank, or a finger-controlled 3D roller-coaster, or indeed navigating through a point-and-click adventure game. A number of stereoscopic camera pairs, meanwhile, could gather stacked 3D data, allowing the EyePad to track different levels of objects and contact points.

Of course, just because Sony files a patent, it doesn’t mean that the company actually plans to develop the EyePad controller for commercial use. Still, with Microsoft having great success with Kinect – and supposedly planning to emphasize the motion-sensor even more with the Xbox 720 – while Nintendo continues to experiment with ambitious tablet-style motion controller, it wouldn’t surprise us to hear that Sony had similar 3D plans of its own for the upcoming PlayStation 4.