Sony A7 and A7R first-impressions [samples]

Sales of dedicated cameras may be struggling across the industry this year, but Sony isn’t letting the segment go without a fight. Having already impressed us by putting a full-frame sensor in the compact-scale Cyber-shot RX1R, now a similarly huge CMOS has cropped up in the new Sony A7 and A7R, two compelling Alphas that bridge the divide between the mainstream NEX series of interchangeable lens cameras, and Sony’s traditional full-body DSLRs. The A7 and A7R aren’t set to hit shelves until December, but Sony gave us early access and a few blank memory cards to see just how innovative pair really are. Read on for our first impressions and some sample images.

Sony has had interchangeable-lens cameras on its books for some time now, in the shape of the NEX series, but none of them have accommodated a full-frame sensor. That all changes with the A7 and A7R, slotting into Sony’s Alpha range by virtue of their specifications (and their prices) that pair DSLR-scale sensors in compact bodies.

Each ticks many of the wishlist-specs camera enthusiasts have had for some time, starting with the 35mm sensor size, but also including a new, gapless chip design, and both LCD display and viewfinder, all at a scale that’s far more pocketable than the average DSLR. The angular bodies borrow design cues from a full-sized Alpha, like the comfortably textured grip and crisply-finished lines that straddle the border between retro and minimalistic, and are comfortably light to hold, depending on your choice of lens. 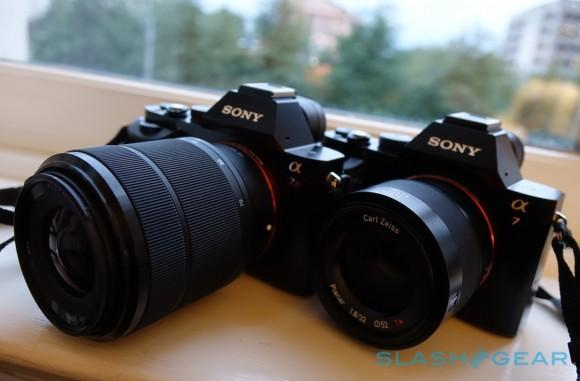 Those lenses obviously include Sony’s new FE-mount Full Frame range, specially designed for the A7 and A7R. However, there’s also support for existing E-mount lenses, though there’ll be some cropping involved as they can’t illuminate the entire full-frame sensor; similarly, there’s A-mount support with an optional adapter.

The new BIONZ X processor is a fresh design for the A7/A7R, and Sony is making some big claims about its performance. Key to that is so-called “faithful reproduction”, eschewing the overly-emphasized edges of objects in the frame – which give the impression of extra crispness, but in ways that aren’t really akin to how things look in the real world – for more natural detail. There’s also new filter processing which corrects blurring and diffraction, and more precise noise reduction that can automatically be applied to different areas of the frame to different extents, rather than as a blanket setting. 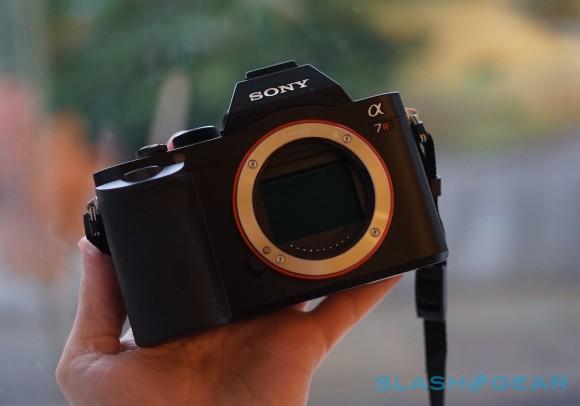 Then there are the sensors, which have far narrower gaps between pixels, and take a more elegant approach to the positioning of the on-chip lenses: toward the center of the frame, they’re centered over the photo-diodes underneath, while toward the edges of the frame they’re slightly offset to account for the angle of light. The combination of less distance between lens and sensor that E-mount allows – down to 18mm, versus the 44.5mm of an A-mount – and the larger, full-frame sensor versus APS-C means that light can enter at a much greater angle than with either Sony’s full DSLRs or its NEX range.

Design-wise, Sony has packed plenty into a relatively compact, 126.9 x 94.4 x 48.2 mm body (the A7R tips the scales at 407g; the A7 at 416g). In addition to the mode dial, there’s a dedicated exposure dial, and not one but two control knobs, one on the front and one on the back, which strike a nice balance between being easy to turn but not too easy. Unfortunately the same can’t be said for the exposure knob, which is all too simple to inadvertently twist when pulling the A7/A7R out of a bag or pocket. 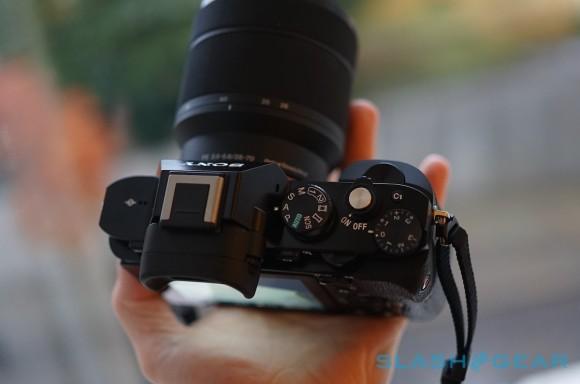 Dominating the back is a 3-inch, 921.6k dot LCD display which can tilt up or down depending on how you’re holding each camera. It’s a great panel, with strong contrast and plenty of detail, but we’re also taken by the OLED viewfinder which Sony has integrated. Delivering 100-percent coverage and diopter adjustment to suit a wide range of eyesight conditions, the viewfinder automatically activates when you lift the camera to your eye. However, we also found that Sony’s sensor to flip between display and viewfinder could easily be triggered by a rogue finger or strap, so we’re grateful it can be turned off in the settings.

Also in the settings is where you’ll find the new Alpha’s wireless connectivity options. Unlike, say, Samsung’s Galaxy NX, there’s not a full smartphone OS running under the hood. Instead, you get integrated WiFi with support for WiFi Direct, so by loading Sony’s PlayMemories apps on a smartphone or tablet, you can easily transfer one or more shots straight from camera to handset. In theory, you should be able to tap your phone against the A7/A7R and use NFC to pair them up, though we never had any luck getting that to work, instead having to manually enter the WiFi Direct passcode ourselves. 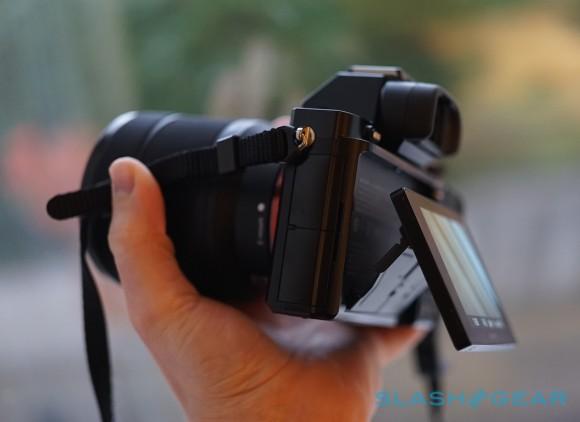 For the most part, Sony’s controls make sense. There’s no touchscreen, but you do get a rear scroll wheel that also doubles as a four-direction D-pad, three programmable buttons (one on the top, one to the right of the viewfinder on the rear, and one that doubles up with the trash key), and a convenient AF/Auto Exposure Lock switch with a built-in manual focus override button.

Our two complaints would be the positioning of the Menu key – off to the left of the viewfinder, rather than falling under your right thumb somewhere – and the dedicated video-record button, the location of which on the outer edge of the right rear grip feels like an ill-considered afterthought. It’s a shame, as the A7 and A7R are capable of recording Full HD 1080/60p and 24p video.

So what’s the difference?

Outwardly, there’s not much to tell the difference between the A7 and the A7R, bar the extra letter on the small product name up front. Both get a magnesium alloy body, though the A7 throws in a very small amount of extra polycarbonate, and the knurled mode dial is strangely different between the two, but otherwise it’s only when you get inside that the real changes are clear.

The cheaper A7 has a 24.3-megapixel sensor, while the A7R steps up to a huge 36.3-megapixel sensor. It also lacks the optical low-pass filter (OLPF) of the A7, which trades better protection from moire in return for a potential increase in detail in the final frame. 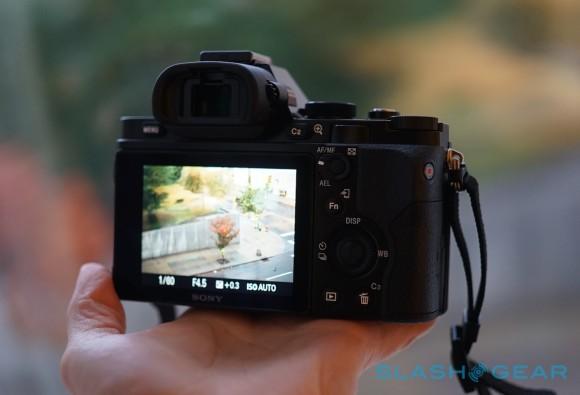 That’s not to say that the A7R is the automatic “best choice” for all photographers. In fact, the A7 is faster – thanks to the BIONZ X processor having less data from each shot to process, versus the A7R – and it gets a more advanced autofocus system, Sony’s new Hybrid AF, whereas the A7R has more traditional autofocus.

Hybrid AF combines phase-detection AF with contrast-detection AF: the latter splits the full frame into 25 different points of coverage, while the former concentrates on the middle section with 117 different points. The mixture of the two promises both speed and accuracy, Sony says, while object-recognition has been thrown in to track things like faces so as to improve the A7’s decision-making process as to what to lock onto.

The upshot is a camera that’s noticeably quicker to lock focus than the A7R (or, indeed, most compact interchangeable lens cameras we’ve tried), the latter of which could sometimes end up ponderous, particularly in lower-light situations. Helping is the trick focus system that highlights – in a choice of colors – which parts of the frame are in focus on both the display and in the viewfinder, allowing you to quickly adjust with the manual dial. 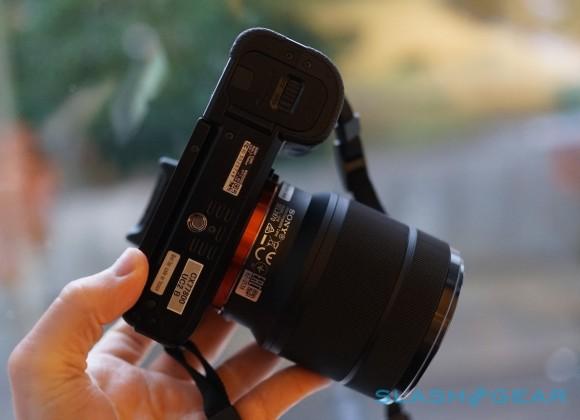 Enough specs, how about the photos?

In a word: excellent. Both cameras are very approachable, capable of producing solid results even with little familiarity (or, for that matter, skill), and benefiting from a surfeit of speed and the general accuracy of the AF and ISO.

The new FE 28-70mm f/3.5-5.6 OSS is a good, flexible starting point. It’s sturdy but not too heavy – it doesn’t overload the front of the camera – and the range of the optical zoom is sufficient for everyday use.

The Zeiss prime, meanwhile, may have lacked the zoom flexibility of the kit lens plus its OIS, but it more than made up for it with the warmth it brought to our images. Since it’s a standard E-mount lens you lose some of the resolution from each camera – the crop brings the A7R down to 15-megapixels and the A7 down to 10-megapixels – but the combination of beautiful bokeh (particularly on close-ups) and the crispness you associate with Zeiss glass show what the new cameras are capable of, even without the dedicated lenses. It’s important, since many people will be turning to non-full-frame E-mount lenses since Sony’s offering of dedicated glass is limited.

Sony may be playing catch-up to Canon and Nikon in the DSLR stakes, but it’s not taking the challenge lying down. What makes the A7 and A7R appealing is the relatively unique approach Sony has taken to their design: starting with the assumption that you want a full-frame sensor and a compact form-factor, and then innovating from there.

The result is a pair of cameras that are capable of DSLR-style photography without demanding the same bulk and weight. They’re capable enough for prosumers and professionals to deliver outstanding images, while simultaneously approachable enough for amateur photographers (albeit those with sufficiently deep pockets) to get impressive shots after minimal familiarization time.

The downsides, of course, are price and lens choice. At $1,699.99 for the A7 and $2,299.99 for the A7R – body-only, mind – they’re well in the region of a more traditional DSLR. The reduction in size without necessarily sacrificing picture quality may make that acceptable to many, but then you bump up against the small range of lenses that Sony will launch with. 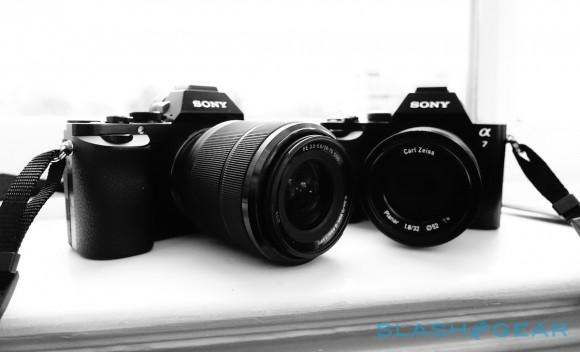 Of course, you can slap on a regular E-mount lens, but then you lose resolution. Sony tells us it plans to have as many as ten full-frame E-mount lenses on sale by the end of 2014, and up to fifteen in 2015, but that’s still short of what Canon and Nikon have to choose between.

Nonetheless, it’s hard not to be charmed by the Sony A7 and A7R. In fact, despite the lower resolution, the faster, more advanced autofocus system of the A7 has us leaning toward the cheaper of the two new Alphas, at least for the majority of potential users, though professionals will probably want the extra detail the A7R brings. Either way, they’re an interesting “big brother” to the NEX series and a solid alternative to the regular Alpha line-up.

Check out more samples from the Sony A7 and the Sony A7R over at the SlashGear Google+ page. Sony hosted us with travel and accommodation.