Sonos has released its new controller app and Sonos S2, the new OS for its multi-room speaker system, complete with new features and a decision for the very earliest-adopters. Sonos S2 introduces support for higher-resolution audio – something the company takes advantage of for its new Dolby Atmos compatible Arc soundbar – though it also sees Sonos leave some old hardware behind.

It’s those who were first onboard the Sonos train that are being impacted, with the earliest hardware simply unable to run this new software. As of now, there are six Sonos products that aren’t compatible with S2:

That’s not to say those products will all instantly stop working, mind. Sonos is also releasing an update to the current controller app, which is being renamed Sonos S1. That will remain compatible with all of the existing, pre-S2 devices. However you won’t be able to add any new, S2 speakers to that multi-room network.

Existing S2-compatible speakers will need to be upgraded before the new Sonos controller app works properly. If you have any of the six models on the legacy list, they can be used separately, in a different Sonos S1-controlled group. It’s not an ideal solution – though Sonos has declined to say exactly how many of those particular devices are still in operation today, and as such how many of its users are impacted now – but it’s certainly better than them ceasing to work altogether. 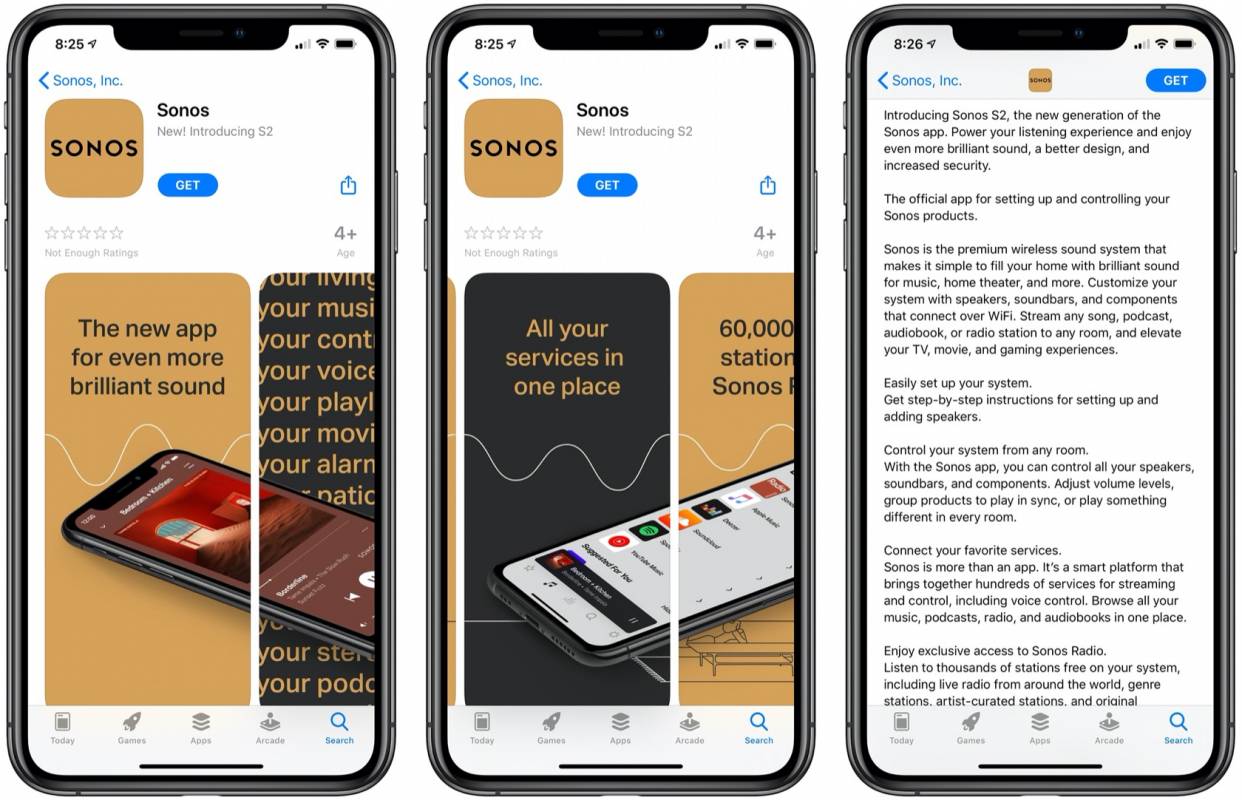 Looking ahead, all of Sonos’ new models will run S2 natively. That includes the Arc, which is up for preorder now and will be released later in the month, the Sonos Five, which replaces the Play:5, and the third-generation Sonos Sub.

The Sonos app – which doesn’t have S2 in the name, but has a gold icon versus the grey of the Sonos S1 app – includes more streamlined ways to control multi-zone playback, together with new grouping options. Down the line, Sonos has said, there’ll be increased personalization,” though so far details on that are slim.

As for the S2 upgrade, that will involve more than just installing the new Sonos app for iOS or Android. You’ll also need to run through the update process for your existing speakers, too, so remember to budget time for that. In order for it to work, you’ll need to be running the latest S1 software as well, so don’t delete the original app until you’ve checked for the newest updates and installed those on your speakers as well.