Say hello to Sonos Arc, the company’s new soundbar and its first to offer Dolby Atmos. Replacing the Sonos Playbar, the Arc squeezes eleven speakers into its long, minimalistic chassis, along with four microphones to work as a Google Assistant or Amazon Alexa smart speaker.

Arc is also among the first of Sonos’ speakers to run its new S2 software, the next-generation of OS that promises plenty but has also caused the company no shortage of headaches.

Designed for the wall or the tabletop

45-inches long, but only 3.4 x 4.5 inches in profile, Arc can be positioned on a table or console in front of your TV, or mounted on a discreet wall bracket if you prefer. It’ll automatically adjust its EQ depending on how it’s mounted, using a magnetic sensor, to avoid unwanted bass resonance. The name is a reference to the shape, a smooth 270-degree curve in matte white or black plastic. 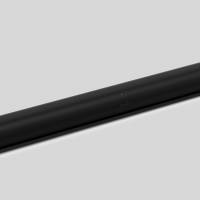 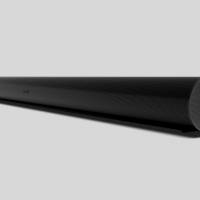 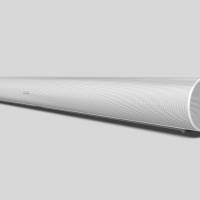 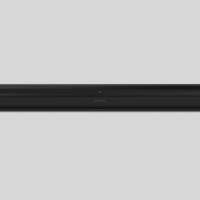 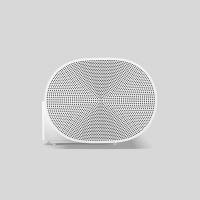 Behind that grille – with hundreds of carefully drilled holes – are eight elliptical woofers and three silk-dome tweeters. Each gets a Class-D digital amplifier to itself. Two of the drivers are upward-firing, to bounce sound off the ceiling for 3D audio when you’re using a Dolby Atmos source. 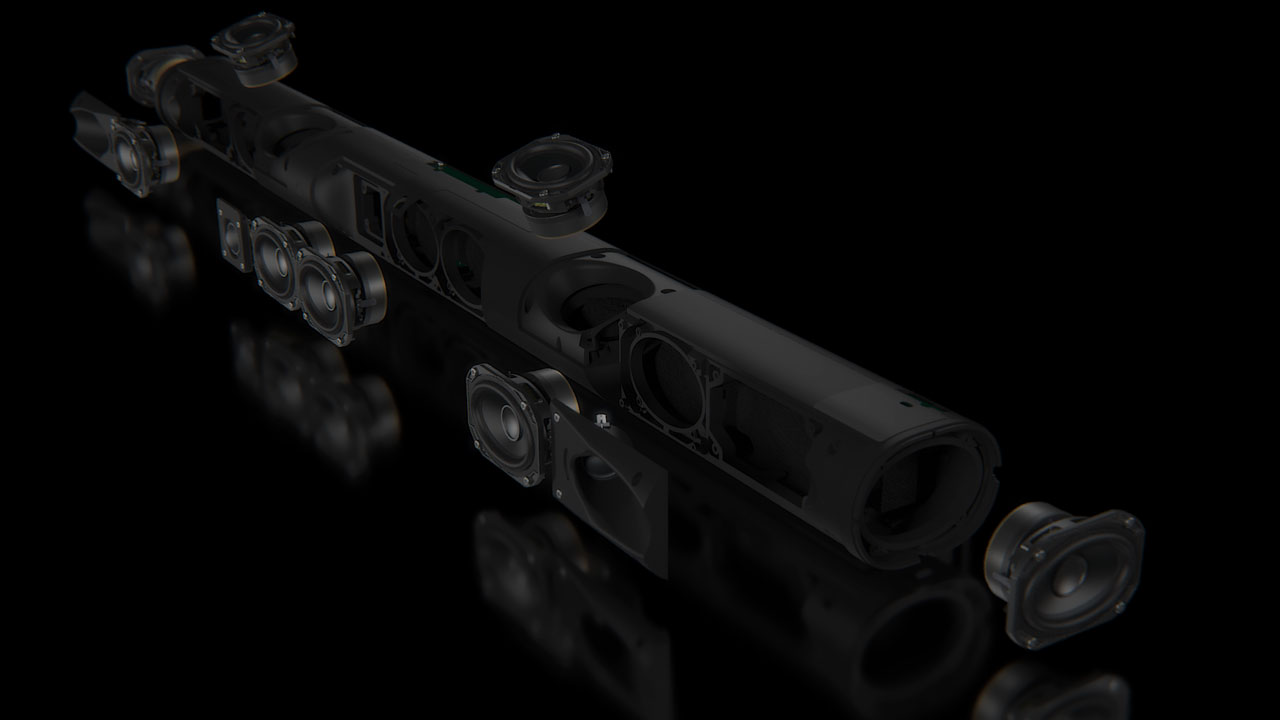 There’s backward compatibility with stereo and Dolby Digital 5.1, of course, though increasing numbers of content providers are including Atmos audio. Like other Sonos speakers, if you have more than one in the room they can be linked wirelessly with Arc. Connect a Sonos Sub, for example – including the 3rd gen Sub announced today – and not only will you get more bass from that, but Arc will automatically retune its own drivers to better fill out the high- and midranges, having offloaded some of its low-end duties. 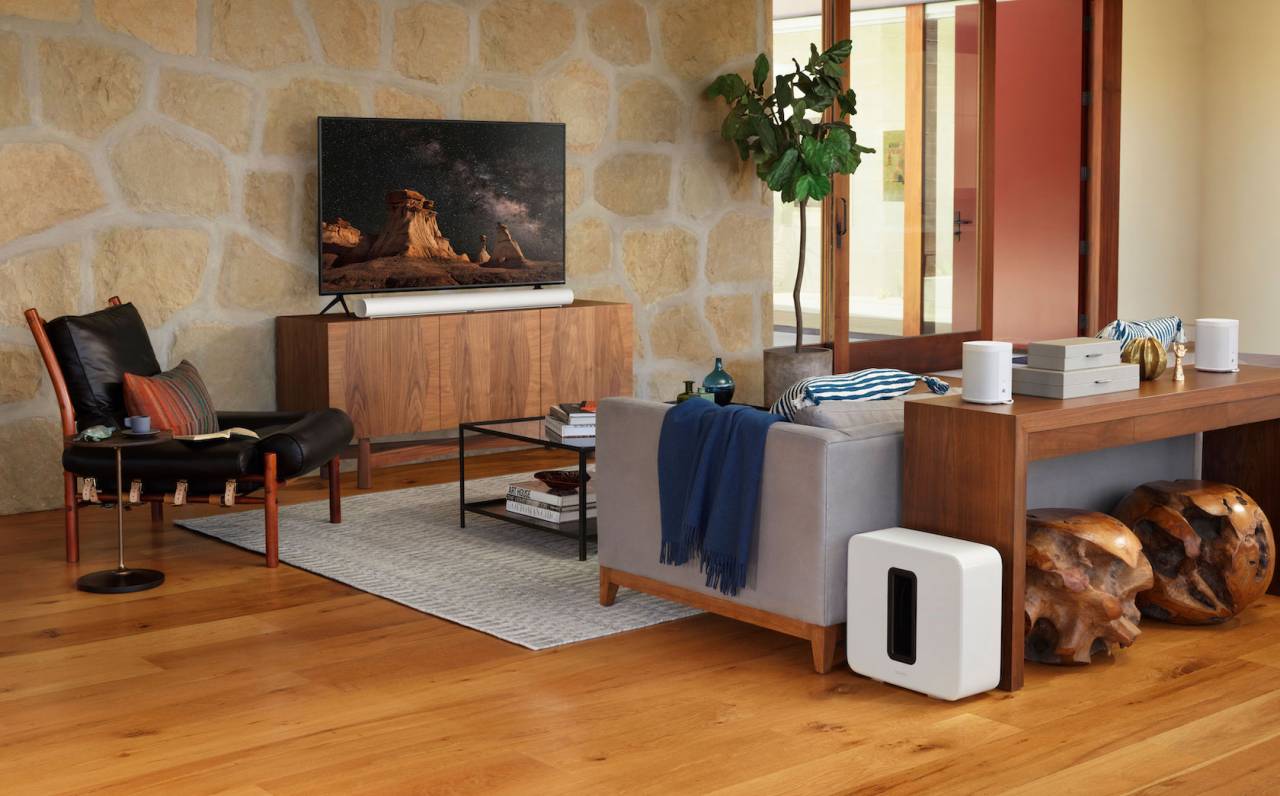 You can also add two wireless speakers – such as a pair of the Sonos One SL – for rear channels in a surround sound setup. Enhanced Trueplay, an upgraded version of Sonos’ tuning technology, can now configure both Arc’s horizontal and vertical sound profile, so that the height of 3D audio is right in your room. It’s also possible to turn on Speech Enhancement for greater vocal clarity at lower volumes, and Night Sound to tamp down on the rumble from loud explosions.

Like the old Playbar, Arc has an optical digital input, but Sonos would rather you didn’t use it. More flexible is HDMI ARC or eARC which, as we saw with the Sonos Beam, allows the TV’s remote control to adjust the Sonos speaker’s volume, among other things. An IR receiver allows Arc to respond to your TV remote as well. 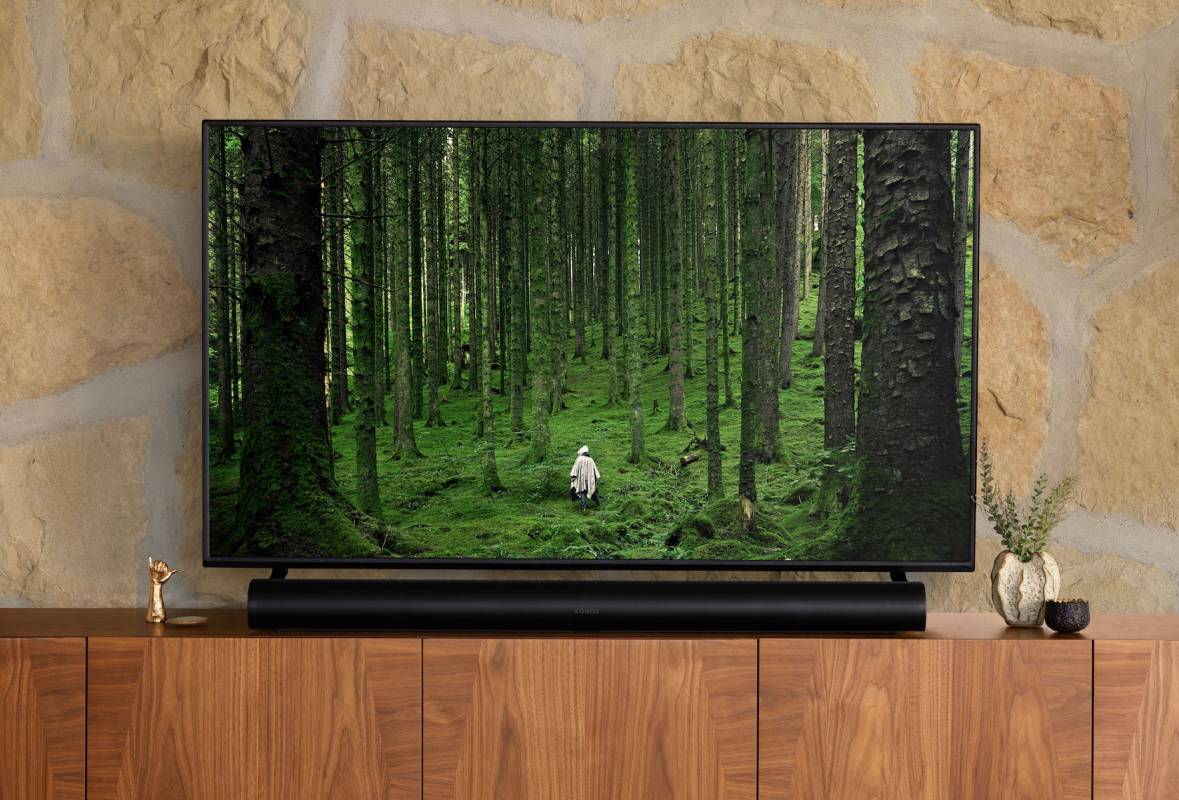 It’s worth noting that, if you use something other than ARC or eARC, you won’t get Dolby Atmos support. Other options include streaming over WiFi or ethernet with Arc joining the rest of your Sonos system. There’s also Apple’s AirPlay 2, for direct streaming from an iOS device.

As for the smart speaker functionality, the four microphones work as a far-field array. That includes echo-cancelation and beamforming, to better isolate the instructions or questions from whoever is speaking in the room. Just as with Beam, you’ll be able to choose between Amazon’s Alexa or Google’s Assistant – though not both at the same time – with the soundbar’s status LED automatically adjusting its brightness to the ambient lighting so as not to be distracting. 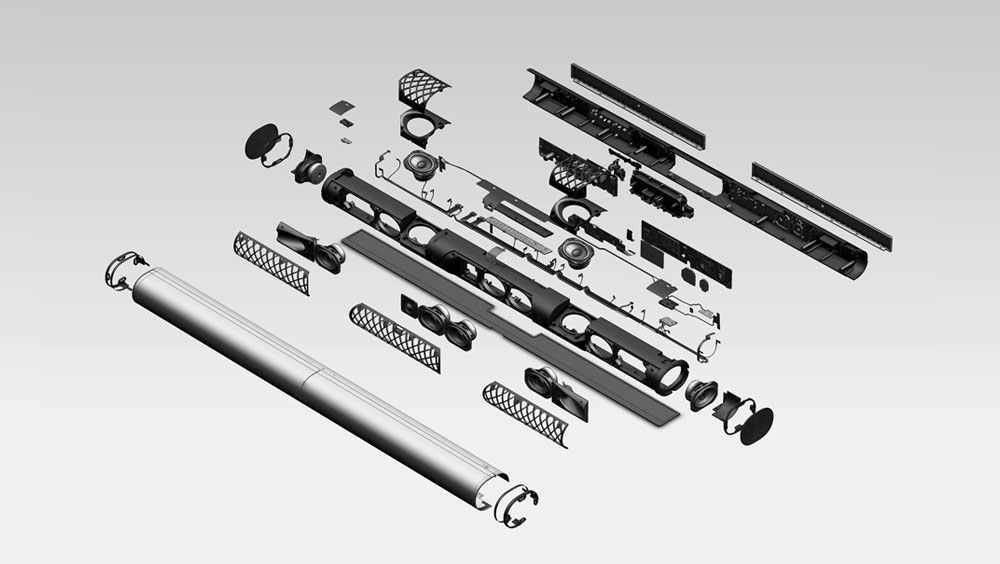 There are also capacitive touch controls, too. That includes tapping to play or pause, adjust the volume, or mute the microphone, plus swiping to skip forward or back through tracks.

As Sonos warned earlier in the year, all of its new products from now on will be running its new S2 software. That marks a break with the oldest speakers in the range, but counters that with the promise of new software features, plus support for higher-resolution audio formats. It’s the latter which has paved the way for this new Dolby Atmos support. 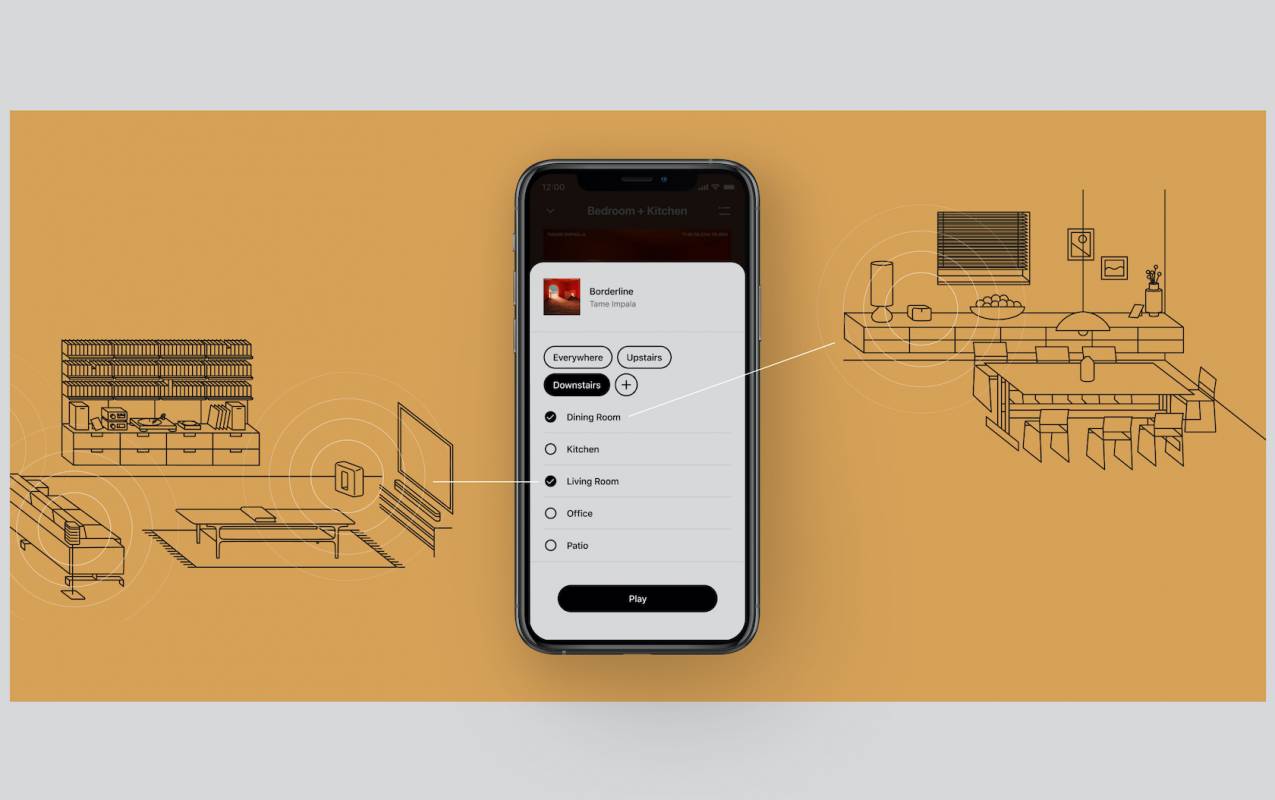 Sonos S2 will be available to install on existing Sonos speakers from June 8, the company says. At the same time there’ll be a new app in the App Store and Google Play; the existing app will be renamed, and you’ll be able to keep using it if you prefer. If you do choose to transition over – and you’ll need to if you want to use the Sonos Arc – all favorites, services, and current settings will be moved over too.

In addition to the Arc, there’s also an updated version of the Sonos Sub. Now in its third generation, it still looks the same as before – a white or black loop – but gets a hardware update inside, so that it can be preloaded with the Sonos S2 software. That includes a beefier processor, more memory, and a new wireless radio. 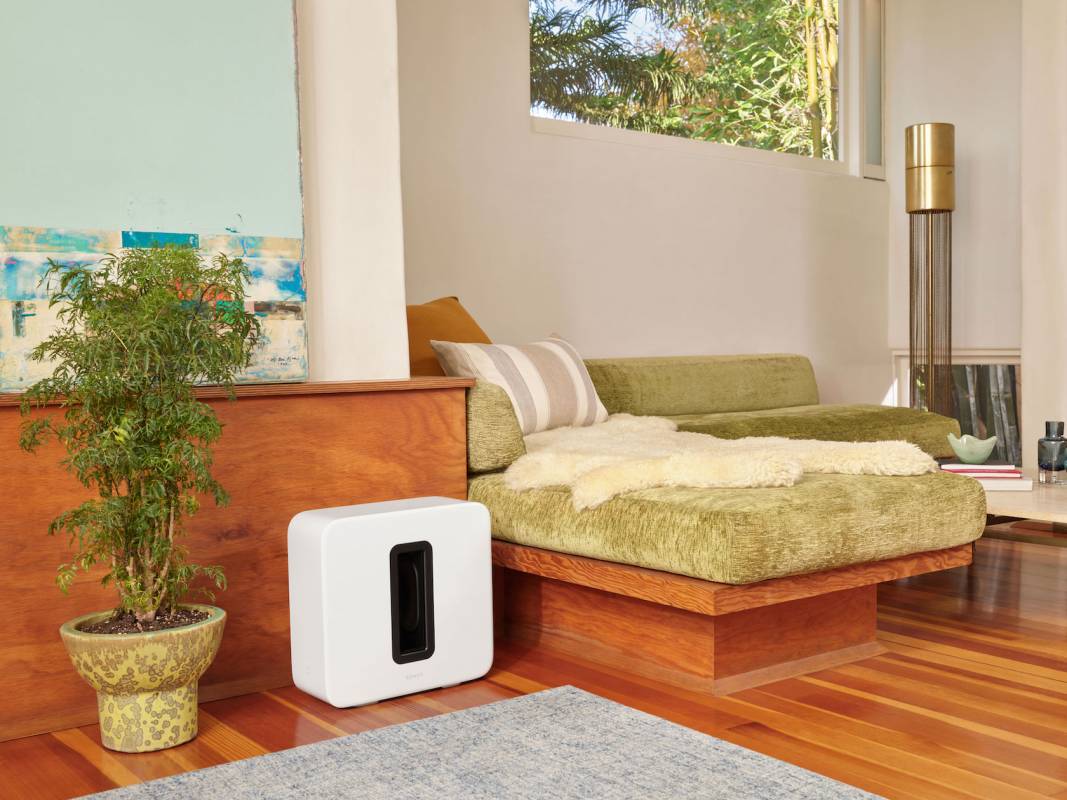 What hasn’t changed is the sound hardware. That means two force-canceling drivers at the center of the subwoofer, positioned to cut vibrations and rattle. 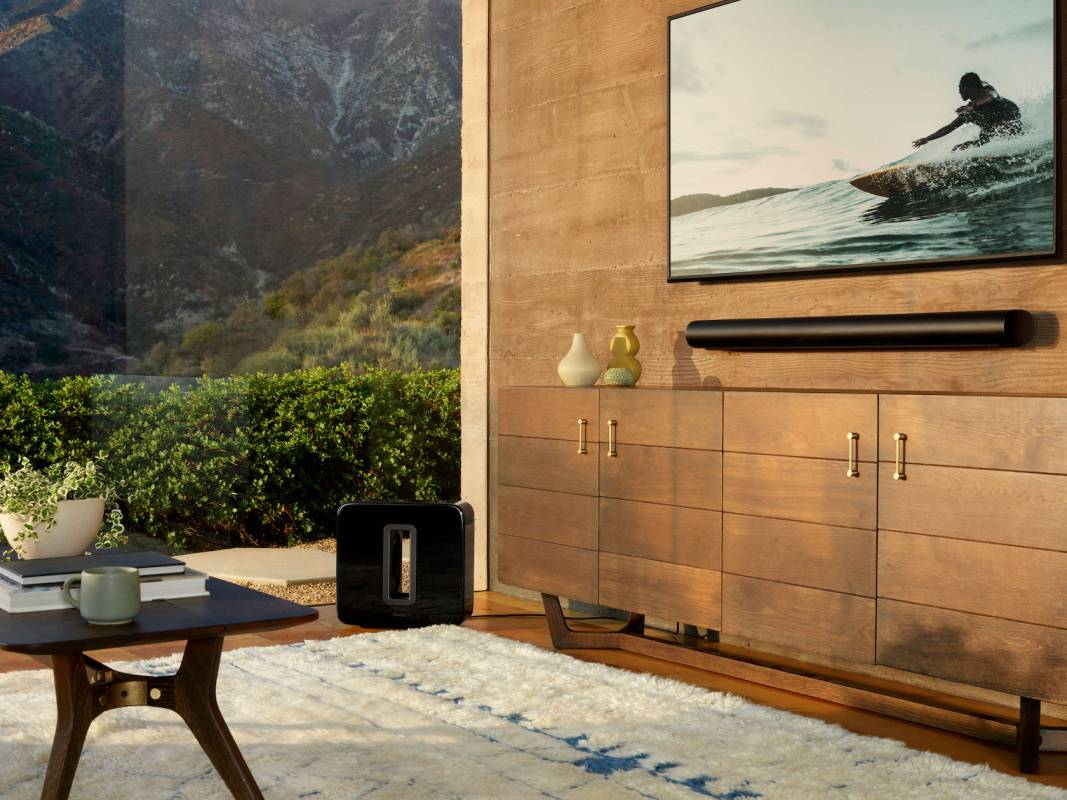 Sonos Arc is up for preorder from today, priced at $799 in the US and £799 in the UK. It’s available in matte black and matte white, and Sonos says it’ll ship from June 10. The wall mounting bracket will be $79.