Sonos is the first to admit it made a mistake. The PLAYBAR, its home entertainment-focused soundbar speaker, was an audio marvel back in 2013 when it was first announced, but the ergonomics didn’t live up to the sound. Turns out, Sonos belatedly realized, that while the PLAYBAR works best when wall-mounted, only the minority of people actually wall-mount their TVs. Enter the Sonos PLAYBASE, completely redesigned to slip right underneath your flatscreen.

Sonos has, perversely, put a huge amount of thought into the design and construction of something you’re meant to ignore entirely. Take the PLAYBASE out of the box – noting Sonos’ exquisite packaging as you go – and the first impression is one of denseness. It’s made of tough polycarbonate, so that it can withstand the weight of a TV on top without relying on metal that might impact wireless performance, with a matte black or white finish. It feels almost like porcelain. 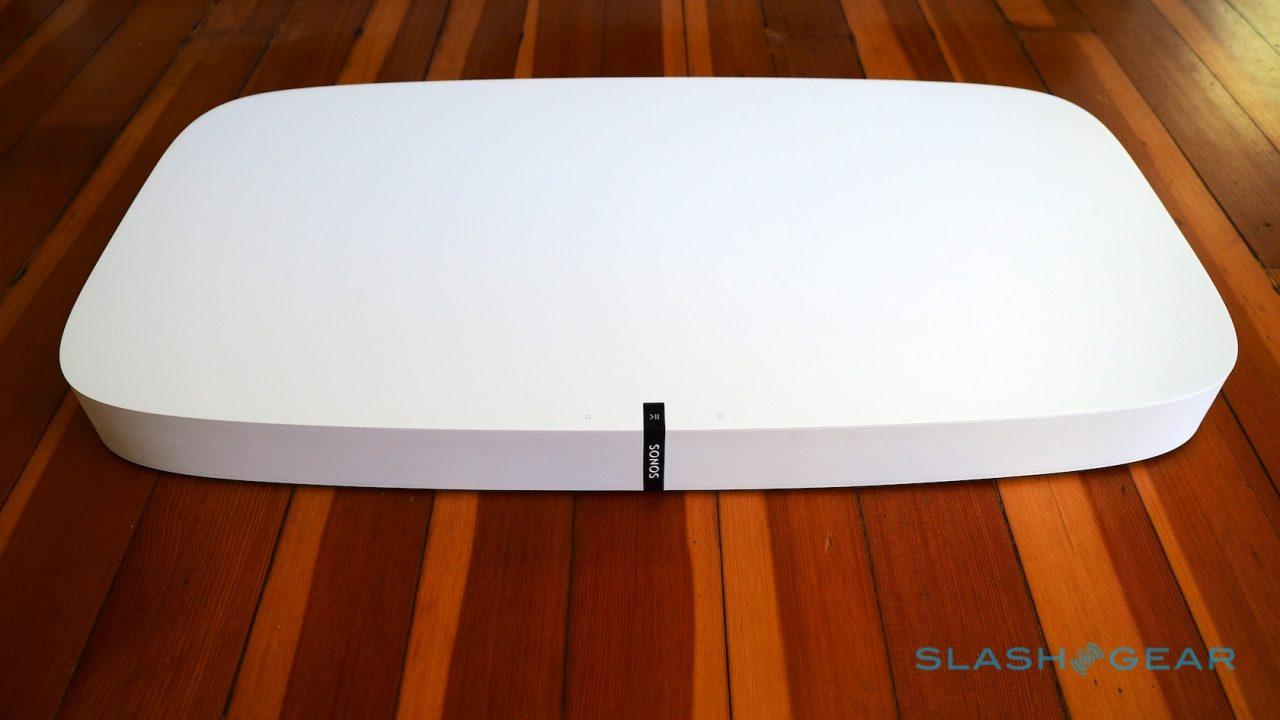 The front and sides are peppered with holes, around 43,000 of them, including across the Sonos logo. Like the second-generation PLAY:5 there are touch-sensitive buttons for play/pause and volume on the top edge. Unlike the PLAYBAR – which remains on-sale alongside it – there’s no capacity for wall-mounting.

Setup is, as per the Sonos norm, straightforward. With only power, ethernet, and an optical digital audio input on the back of the PLAYBASE, there’s not much to plug in: if you’re connecting it to a wireless network, you could be done with just two cords. After that, it’s a case of finding the speaker with the Sonos app and pressing the pairing button on the side to confirm it. 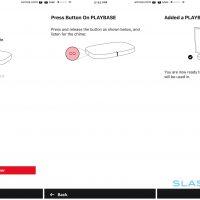 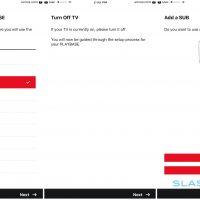 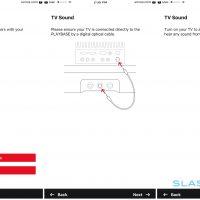 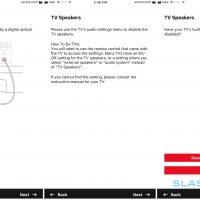 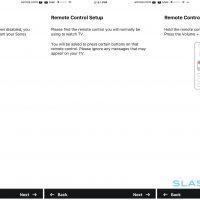 The app then runs through downloading the latest firmware and walking you through tweaking your TV settings so that audio comes through the PLAYBASE rather than the built-in speakers. For me, that meant heading into the audio menu and choosing the optical digital output rather than the speakers; the app recognized that, and moved onto learning the TV remote’s volume commands. 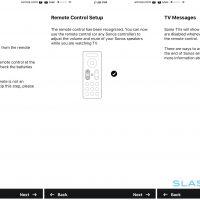 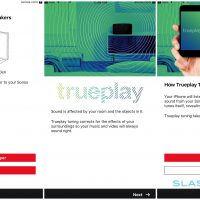 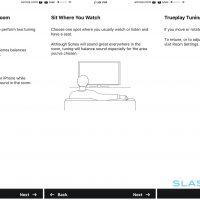 That’s where I encountered a hiccup. Rather than IR, the TV’s remote I was using relied on Bluetooth; that meant the PLAYBASE couldn’t recognize its commands. The volume buttons on an Apple TV remote were recognized, however, and I could use them to adjust the PLAYBASE volume. If you would typically control volume with the TV’s own remote and the Sonos system can’t understand it, however, you’ll be forced to change volume using the Sonos app. That’s a lot less convenient than a dedicated remote control.

When Sonos took the wraps off the PLAYBASE, much was made of the speaker’s relatively low-key interconnectivity. Unlike the HDMI switcher many modern soundbars feature, it makes do with the digital audio output alone. The thinking, Sonos explained to me, is that most people now rely on at least two or more sources for their home entertainment these days: perhaps a set-top box for cable, a streaming device like Apple TV or Amazon Fire TV, and both OTA broadcasts and smart TV apps on the TV itself. 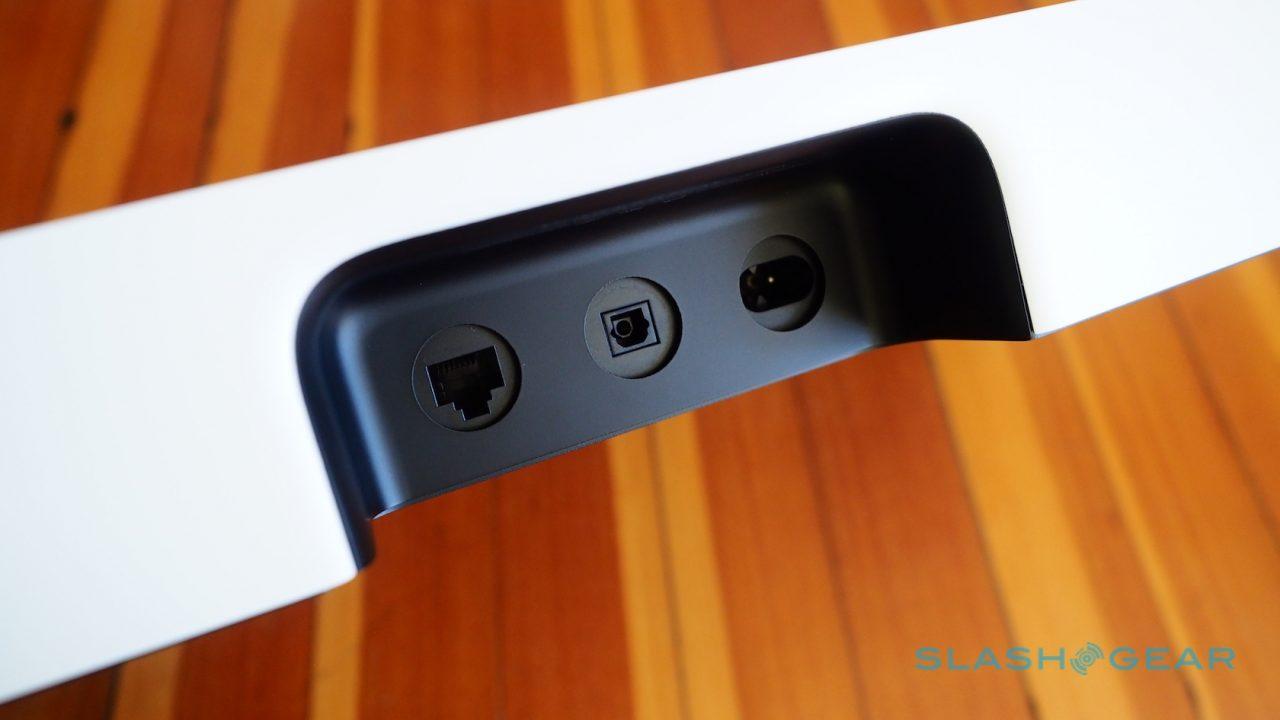 With that variety in play, Sonos decided that leaving the TV as the hub and simply taking over audio duties was easiest. Indeed, had I plugged the PLAYBASE into the Apple TV, say, I then wouldn’t have been able to hear audio from the TV’s own Amazon Prime Video app. If you’re using the PLAYBASE to listen to music, it automatically switches to TV audio when it gets a signal from the optical digital connection.

I’d love to show you a photo of a TV perched neatly atop the PLAYBASE, but unfortunately I can’t. Neither of the two sets I have on-hand fit properly: with one, a 65-inch Samsung with a Y-shaped base, the legs extend off the side of the Sonos speaker by about 4-5 inches each side. It’s stable – and the roughly 28-inch wide PLAYBASE will handle up to 77 pounds in weight – but it doesn’t look especially pleasing to the eye. 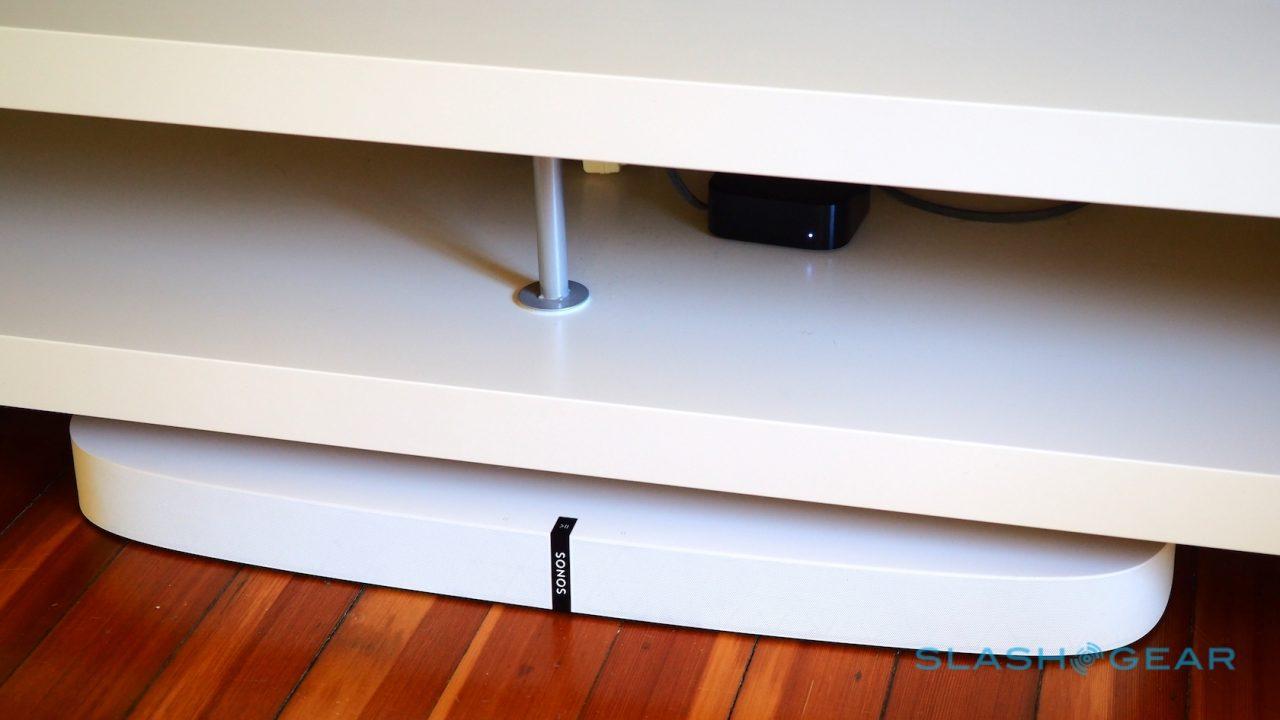 The other TV, though, is a 43-inch HiSense with a small angled foot at each side. Since they’re spaced just too far apart to stand on the PLAYBASE, there’s no way it can fit on top. In the end, I settled for slotting the speaker underneath the TV cabinet where, since it’s just over two inches in height, it fit with room to spare.

Sonos does have a workaround if you’re in my situation, a custom-designed base for TVs called SANUS. Effectively a wall-mount but on a pillar stand, the $149.99 base is suitable for sets between 32- and 60-inches, and up to 60 pounds in weight. Unfortunately, the Samsung TV I wanted to test is slightly outside of those specifications.

The PLAYBASE takes lemons and makes lemonade, however. With many speakerbars, being shoved unceremoniously underneath a TV cabinet would be the kiss of death for audio quality; Sonos, though, has a secret weapon. That’s Trueplay, its tuning system. 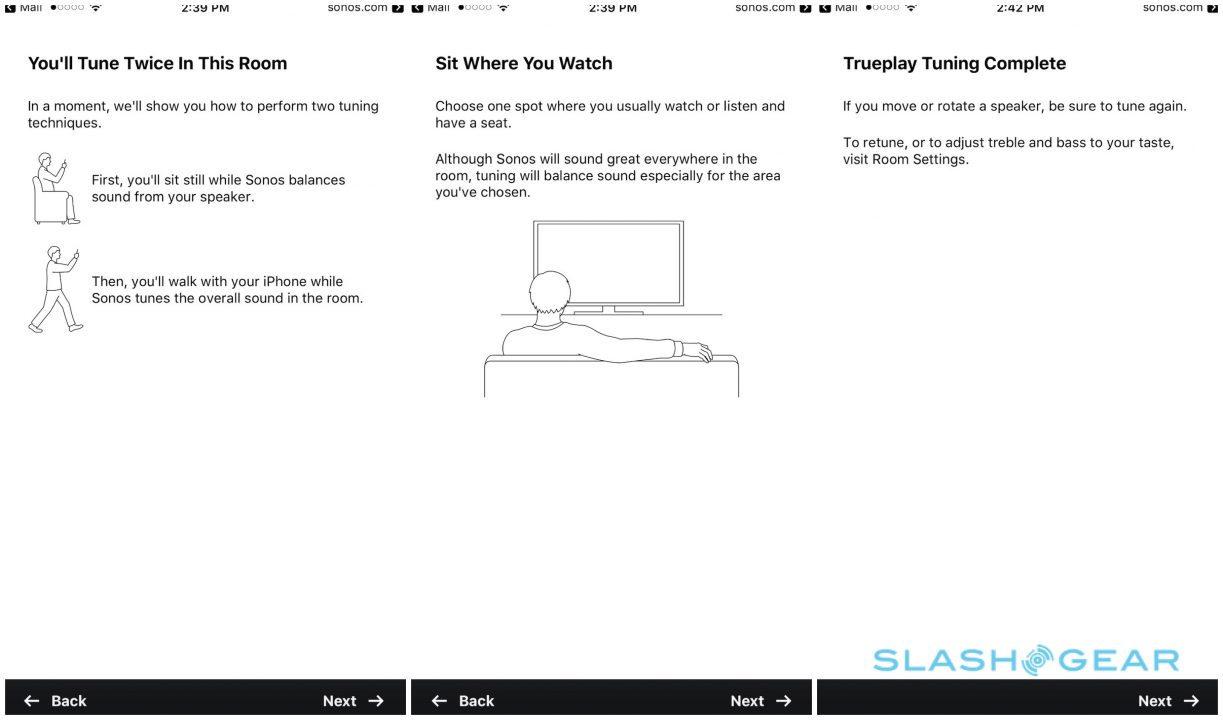 Launched in 2015, Trueplay basically uses your iPhone or iPad as a calibration microphone. First, you sit in your typical TV-watching position with the phone held at head-height, as a series of booming tones are played. Then, you walk slowly around the room, waving the phone up and down as more tones sound. After a few seconds’ consideration, the PLAYBASE adjusts its own EQ settings to take into account reflective surfaces, walls that may be nearer on one side than the other, and other placement compromises.

It’s not quite magic, but it’s fairly close. Beforehand, the PLAYBASE sounded good but a little flat, perhaps due to reverberations from the underside of the cabinet. After tuning, though, it sounded like the audio had gained headroom and was better filling the room. Subtle, yes, but definitely worth doing.

What isn’t subtle is the volume the PLAYBASE is capable of. Part of the reason the speaker took so long for Sonos to produce is that the company’s engineers needed to come up with drivers small enough to fit inside the low-profile chassis, but still sufficient to fill a room with sound. The result is an array of six mid-range, three tweeters, and a woofer. 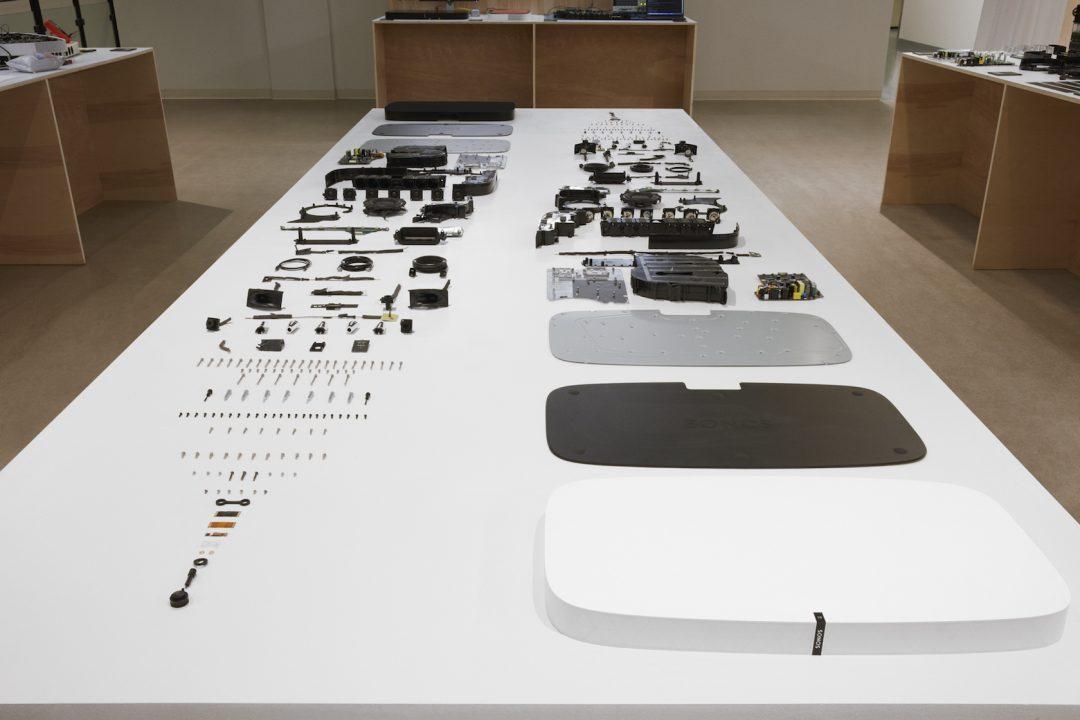 I feared bass would be in short supply, but needn’t have worried. The PLAYBASE is bright, bold, and full-bodied, managing just as much stereo-separation as its wider PLAYBAR sibling, itself impressive at creating a soundstage given that it’s an all-in-one system. You can pair up a set of PLAY:1 or PLAY:3 speakers for rear stereo surround duties, which sounds great with the right content, but though Sonos does off a wireless SUB subwoofer, I can’t imagine most people needing it. If you live in an apartment, save your money (and avoid arguments with the neighbors).

One of the elements I like the most is how hands-off the PLAYBASE can be. Indeed, once you’ve set things up, you can basically leave it to do its thing, forgetting it’s there and just enjoying the markedly better audio than any TV’s own speakers are capable of. That’s not to say there aren’t extras.

Dig into the Sonos app and you find the two sound enhancement options. Speech Enhancement is basically an EQ setting that prioritizes audibility of vocals, toning down louder sounds in the process. If you’ve ever had problems making out dialog in action movies, it’s worth turning on. 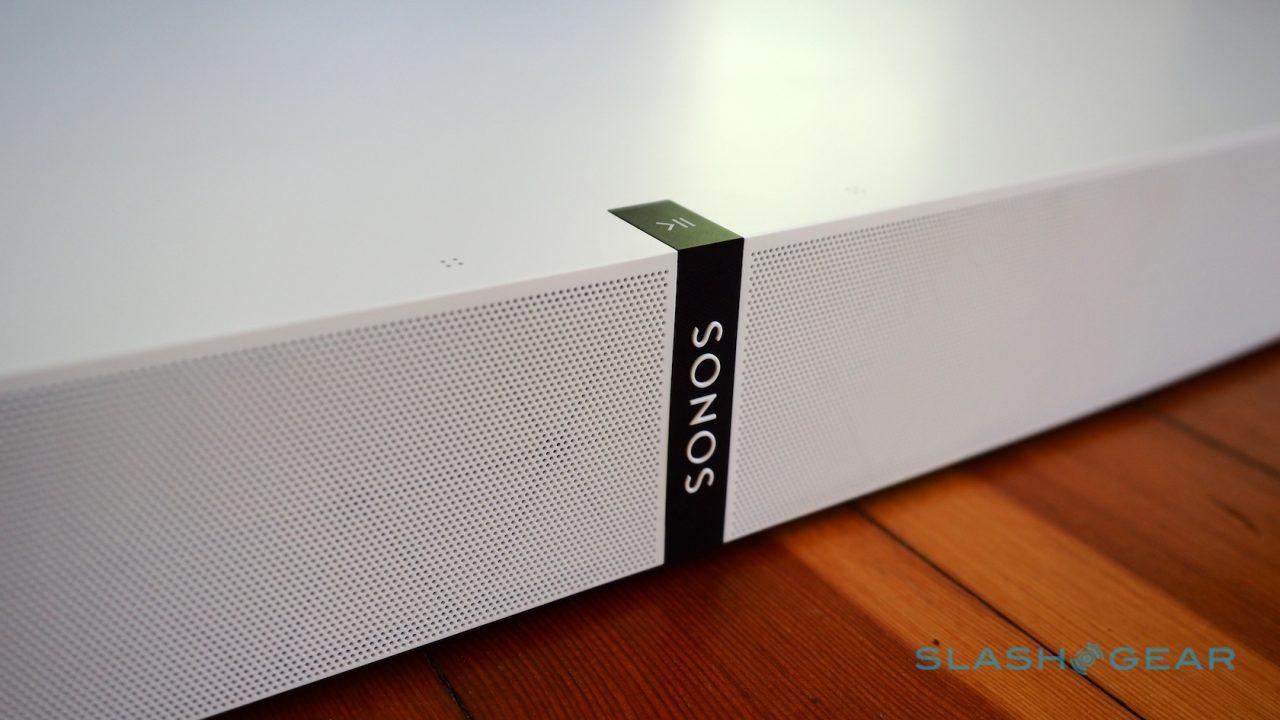 Night Sound, meanwhile, is more about keeping the rest of the household happy, not just the person watching. Intended to be used with low overall volumes, it raises the quieter sounds while tamping down on the louder ones. The result is audio that’s still legible without being overpowering.

Sonos, of course, is mainly known for its multi-room music. There, like the PLAYBAR, the PLAYBASE fits in as just another speaker zone. You can pipe music through to it from a local computer or network-attached storage, your iOS or Android device, or from a host of streaming services like Spotify and Apple Music, either individually or grouped with a set of other speakers. It’s definitely more powerful than a single PLAY:5, as you’d expect. Conversely, you can broadcast TV audio from the set plugged into the PLAYBASE out through every other speaker on your Sonos network.

Not everything is perfect, mind. Though you get Dolby Digital 5.1 surround sound, there’s no support for DTS multichannel; Sonos says that’s because it’s not used on streaming services, only physical media, though that hasn’t stopped PLAYBAR owners from complaining about it since 2013. There’s no Dolby Atmos support, either, though that would require ceiling-mounted speakers and probably go against Sonos’ ethos of simplicity. Maximum bitrate is – as per other Sonos speakers – limited to 16-bit/44.1kHz. Later in the year there’ll be Amazon Alexa support, though you’ll need an Amazon Echo or Echo Dot since it won’t be built into the PLAYBASE natively. 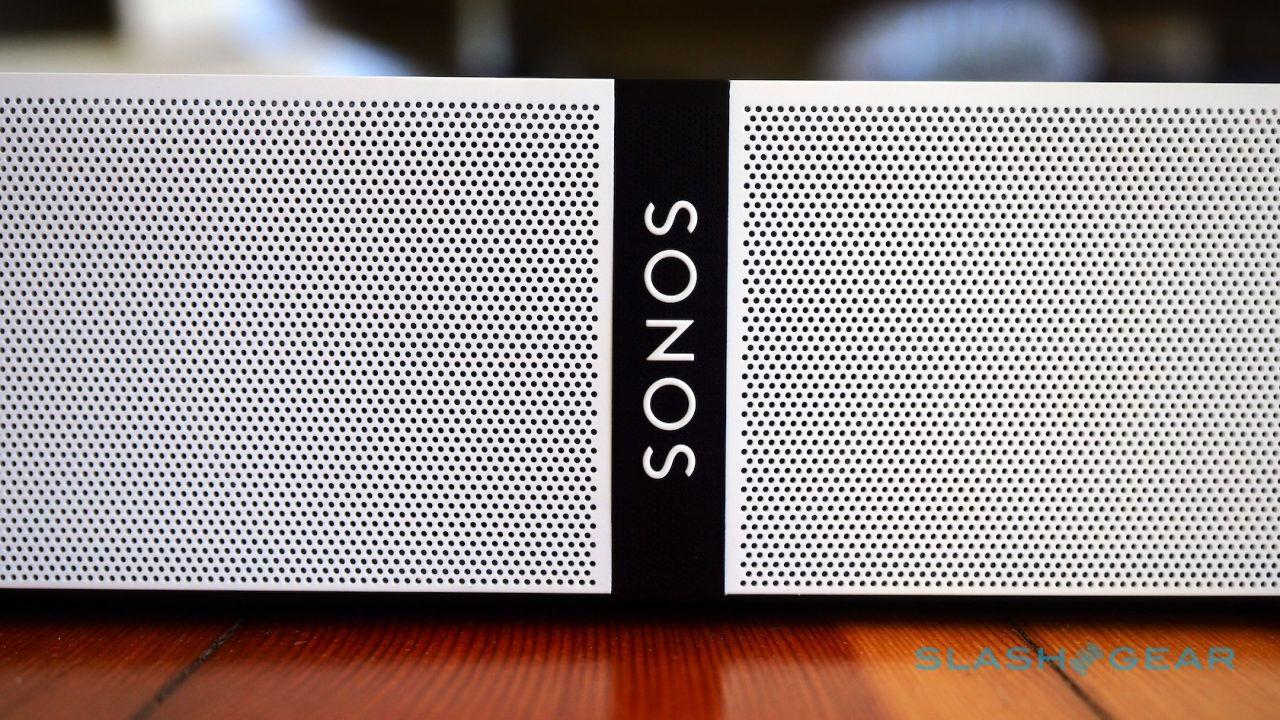 The absence of DTS support means those with sizable libraries of Blu-ray or other physical media should look elsewhere. Still, true home theater aficionados likely wouldn’t be satisfied with a speakerbar anyway, preferring a traditional surround sound system instead. Indeed, if you’re thinking of adding a $699 SUB and a pair of $299 PLAY:3 to the $699 PLAYBASE you’re looking at just shy of $2k, and I’m not convinced it’s the best route to take for surround sound.

Instead, the PLAYBASE makes most sense as a simple, discreet way to give your TV’s speakers a considerable upgrade without your living room descending into wire madness. Long-term followers of Sonos won’t blanch at the $699 price tag, and though there are cheaper soundbars and even full 5.1 surround systems out there for less, few if any boost the convenience, simplicity, and general polish of Sonos’ platform. Indeed, it’s existing Sonos owners who make the most sense for the PLAYBAR; they just need to make sure they measure up their TV stands first. 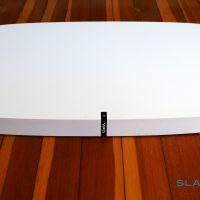 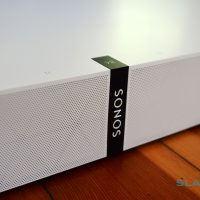 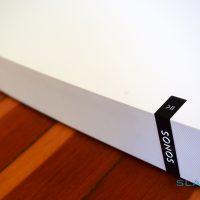 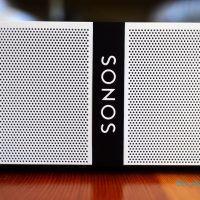 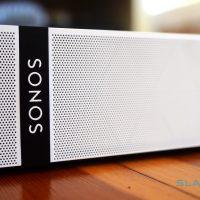 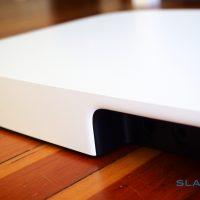 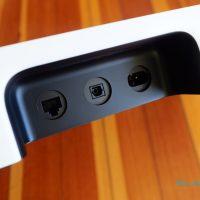 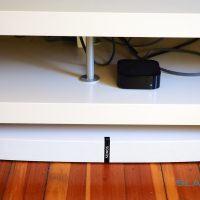 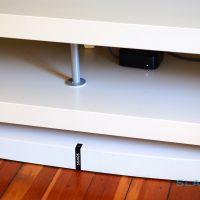