The Sonos PLAY:5 is special. First of the streaming music company’s all-in-one speakers, its launch in 2009 marked a shift to the plug-and-play simplicity that Sonos is now known for, without sacrificing the sound quality that music lovers demanded. Since then, new and more affordable models have lured in a fresh generation of wireless fans, while products like the PLAYBAR have tackled home theater audio, but it’s taken until now for the granddaddy of the range to get its big revamp.

Sonos’ styling is both familiar and new. 2015’s PLAY:5 has the recognizable trapezoidal shape of its smaller siblings, but it’s a more mature design: the body of the speaker is now a single piece, and the micro-perforated grille shows greater finesse around its edges. 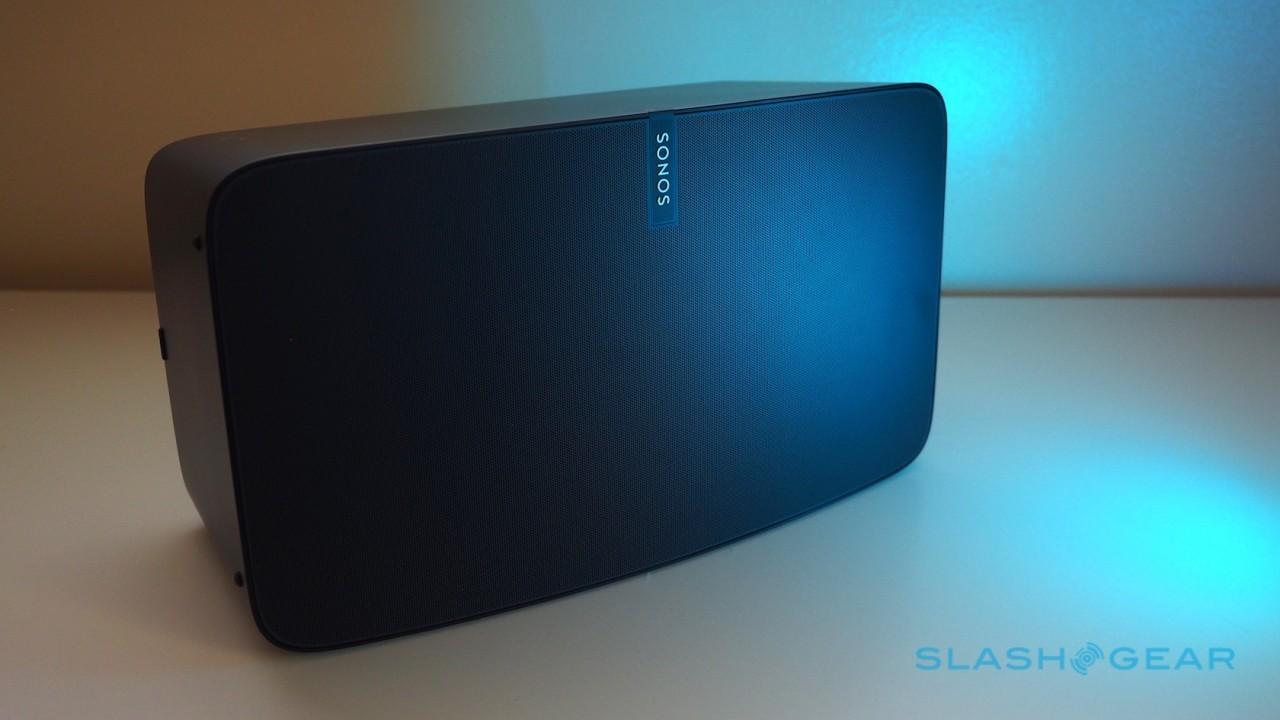 The most obvious on-device changes are the new controls. Running across the top there are touch-sensitive buttons for volume and play/pause; however, swiping left or right across them skips back or forward in your playlist. Previously, you could double-tap the play/pause button on Sonos speakers to jump ahead, but there was no way to step back, so it’s a useful improvement.

On the back, there’s an ethernet port and a 3.5mm aux-in; the latter can stream any external source across your entire Sonos network, not just play it back through the PLAY:5 it’s connected to. Absent, though, is the second ethernet port the original PLAY:5 had, and which offered pass-through connectivity to a wired device. 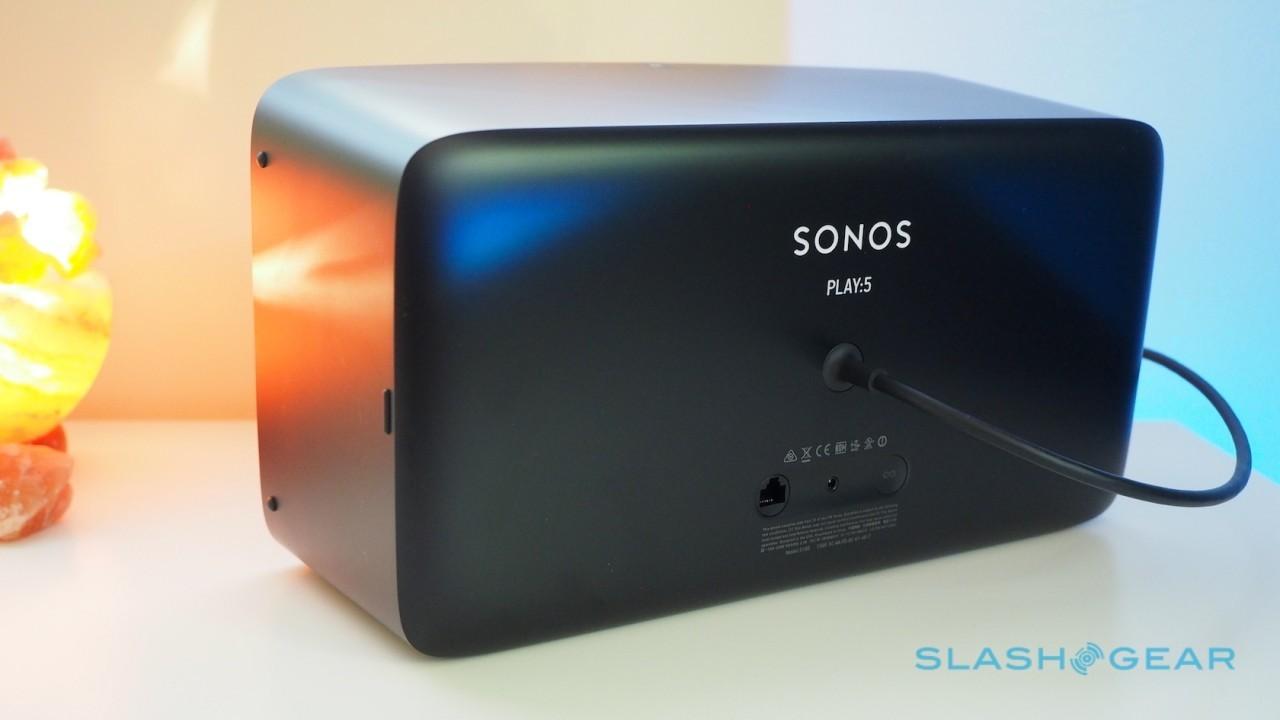 Ease of setup has always been a hallmark of Sonos’ products, and the PLAY:5 is little different. After plugging it in, I opened the app on my iPhone, selected the “add new speaker” option, and pressed the button on the back of the PLAY:5.

After a few moments it recognized my existing Sonos speakers, and then offered to walk me through the Trueplay process.

Trueplay is a new feature, intended not only for the new PLAY:5 but the original version, in addition to the PLAY:1 and PLAY:3. Effectively it’s a spatially-minded automatic EQ system, which uses uses an iOS device’s microphone to acoustically map the space around the speaker and then adjust bass, mid, and treble to suit. 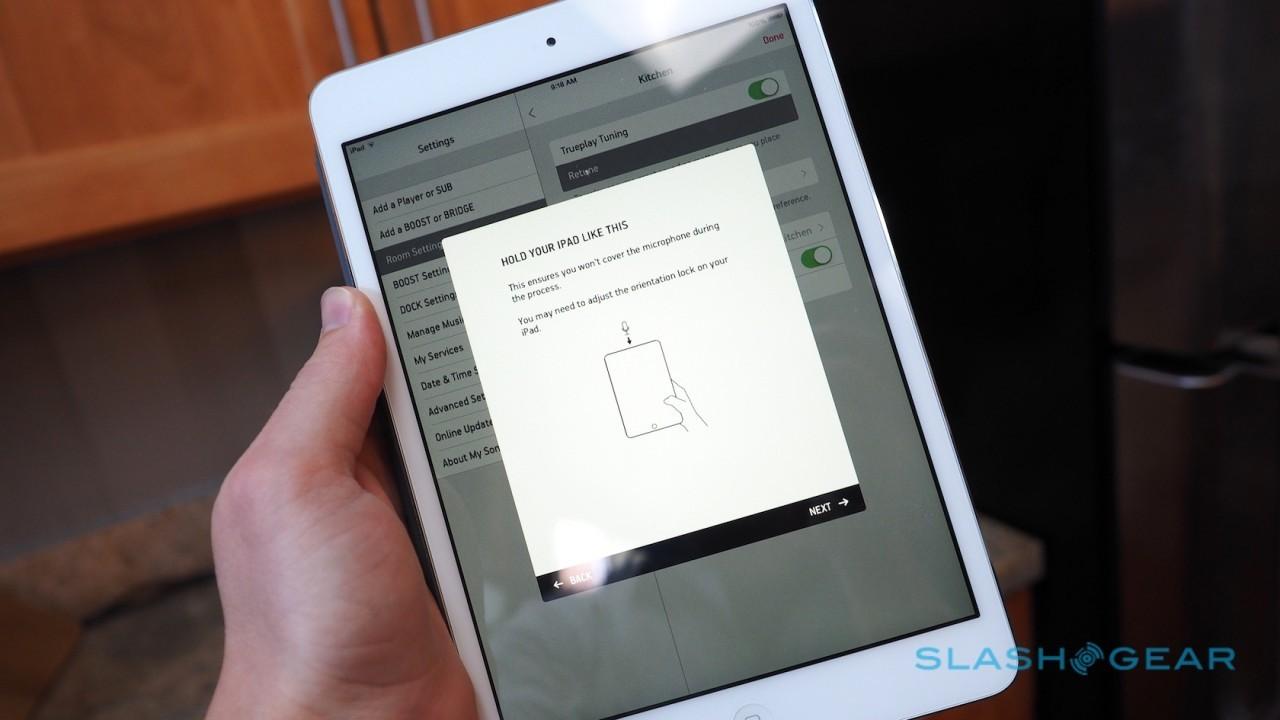 For the moment, Android users are out of luck – Sonos tells me that’s because the variation in microphone hardware across OEMs makes it tricky to standardize – but since you only need to run Trueplay once per location they could feasibly invite an iPhone owner to dinner and then borrow their handset for the setup process.

Once triggered, the PLAY:5 sounds a swooping droning noise and you spend the next 45 seconds or so walking around the room, slowly waving your iPhone or iPad up and down with particular attention paid to the places you’re likely to be listening at most often. That gets repeated for every individual speaker.

Sonos says that the EQ adjustments that take place as a result are more granular than the user-facing bass and treble sliders in the app, but not every room will need Trueplay adjustment. I first tried the PLAY:5 in a larger, rectangular space, placed on a broad window ledge near a dining table where I work from sometimes, but after running through the process the app told me no custom changes needed to be made. 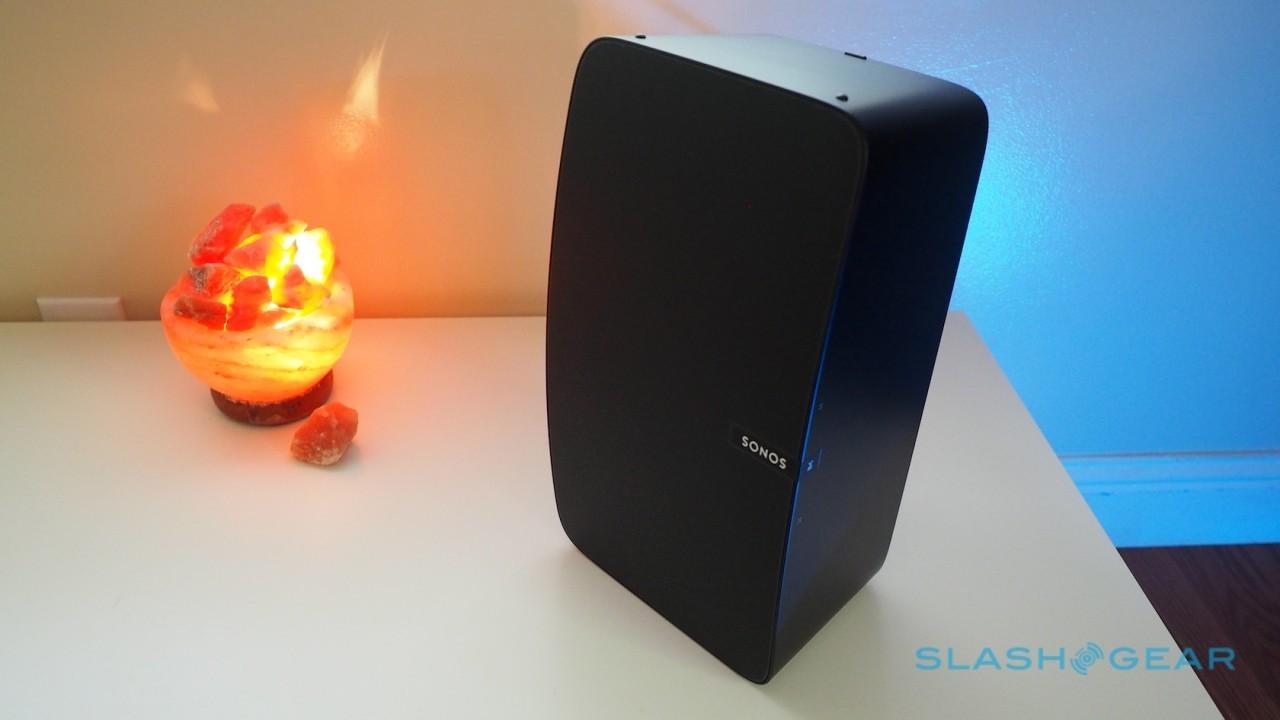 In contrast, when I moved the PLAY:5 into the corner of a different room, tucked onto a shelf, Trueplay decided it could make improvements to the settings. Sure enough, tracks I listened to before and after tuning sounded clearer and less muffled; I don’t think I would have necessarily thought beforehand that they were lacking in some way, but Trueplay certainly improved them.

That music sounded so good without tuning is testament to the PLAY:5 itself. Behind the grille are three 10cm midrange drivers, two 2cm tweeters on the left and right, and a final 2.2cm tweeter in the middle. 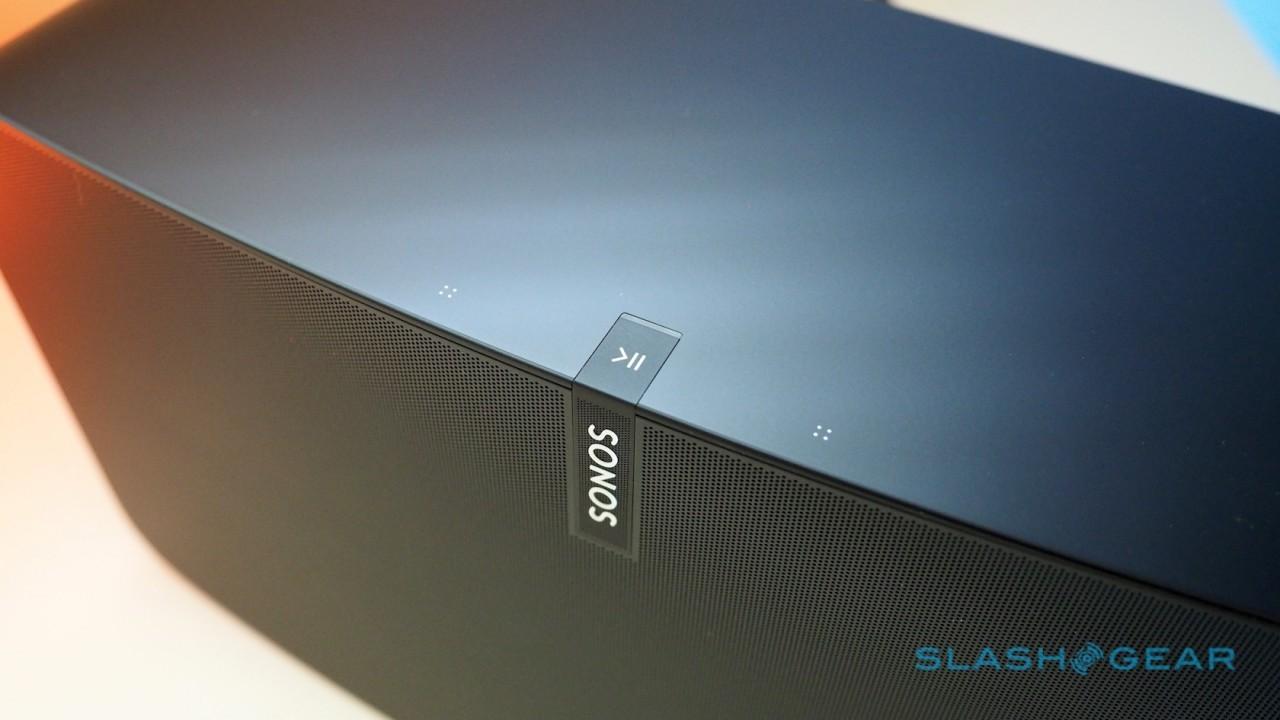 Just as the PLAYBAR uses driver angling to broaden its stereo soundstage, the new PLAY:5 points its outer tweeters nearly sideways. It’s what gives the all-in-one a sound more like two individual speakers, and though you’re never going to get the exact audio experience of truly separate left and right channels, it’s an improvement over the old system.

Bass is also impressive. Unlike the original PLAY:5 the new version isn’t ported, with Sonos switching to a sealed enclosure this time around. There’s a grunt and rumble that achieves both energy and precise restraint, rather than sounding flabby or loose. Certainly if you’re a bass-addict you’ll probably want to throw in a Sonos SUB, but apartment dwellers will almost certainly find the new PLAY:5 has more than enough low-end to sour relations with their neighbors. 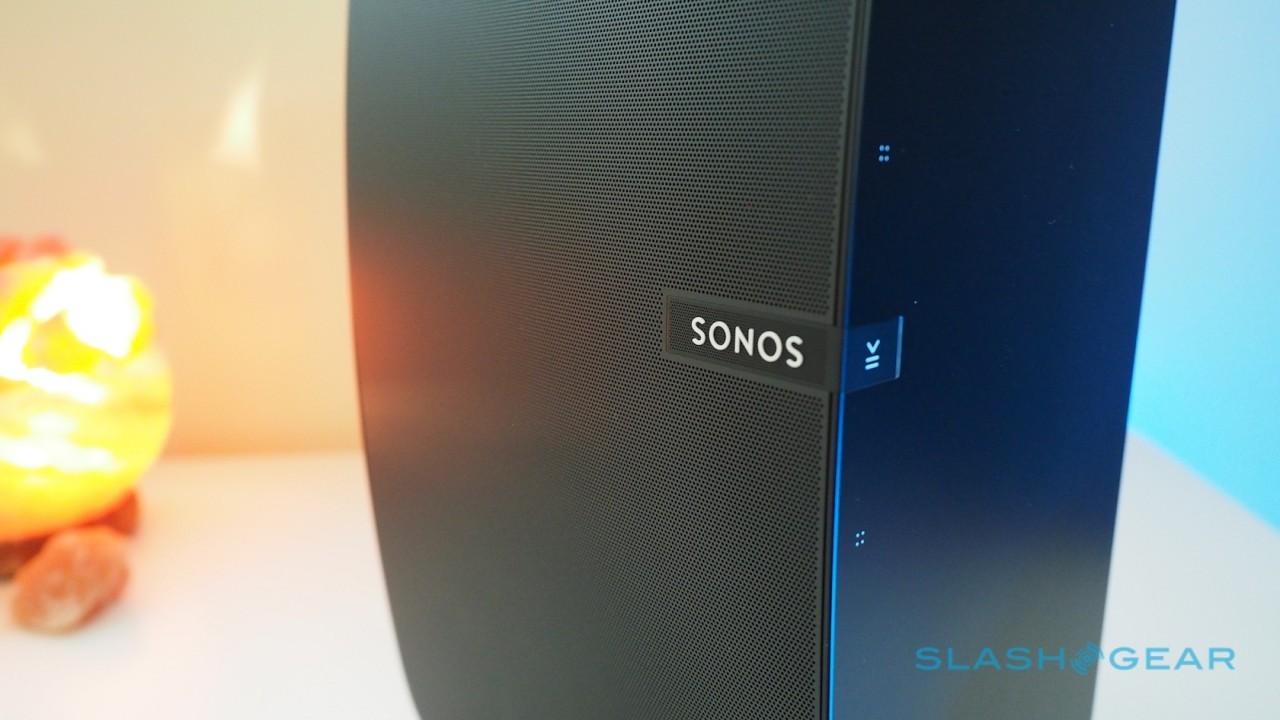 At the other end, there’s both sparkle and precision to the treble, while the midrange lacks the anonymity that some all-in-one speakers can suffer from. It’ll crank up high, too – the volume up/down buttons flip orientation according to which way up you have the speaker – without distortion.

Unfortunately, Sonos only provided me with a single PLAY:5 unit, so I couldn’t test out the paired mode. There, though, you can also have the two speakers in either horizontal or upright positions, the former promising a wider stereo image and the latter a more focused sweet-spot better suited to individual listening.

Things may improve there over time, too. Sonos has already demonstrated that the software upgradability of its speakers allows old dogs to be taught new tricks, but the PLAY:5 actually comes with hardware future-proofing too. 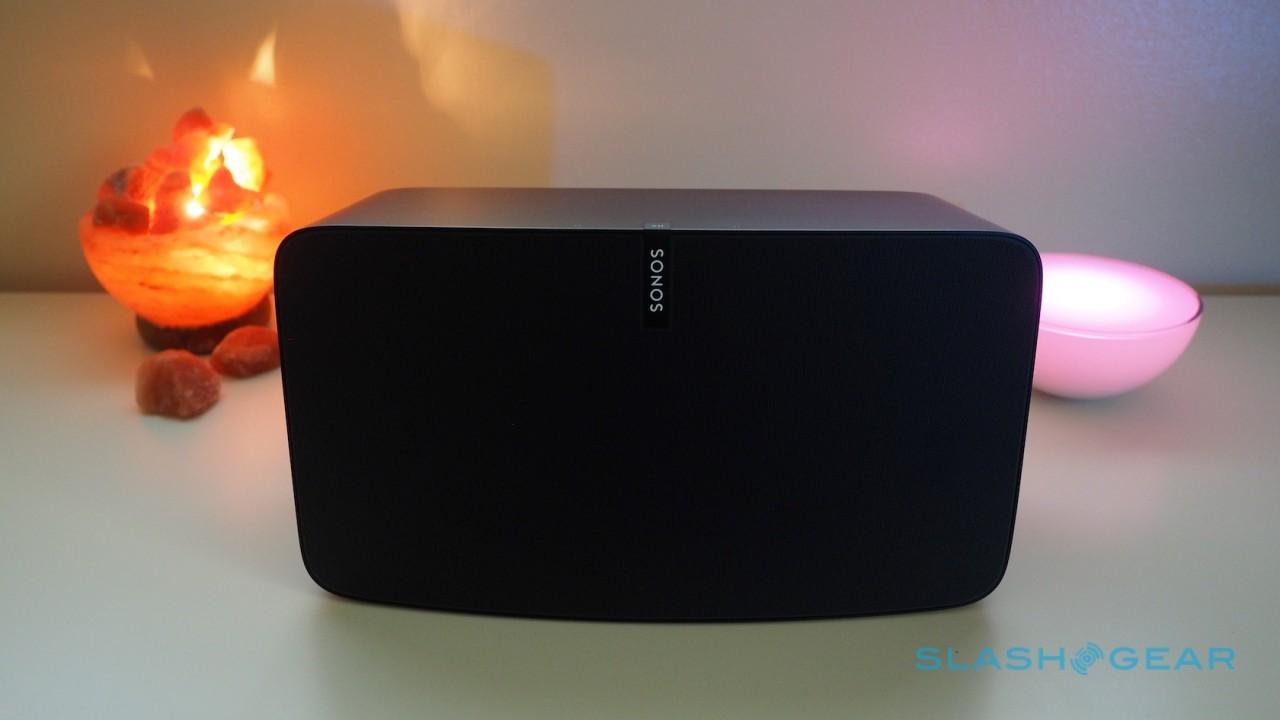 Two microphones live inside the enclosure, currently dormant but waiting for firmware to enable them. What they’ll actually do at that point is, Sonos freely admits, a mystery: they’re just there because the presumption is that the engineers might find them useful down the line.

Whatever they’re activated for, Sonos promises that owners will get a warning before that happens, along with the ability to opt-out.

Given that sort of forward planning, I’m a little disappointed that the PLAY:5 lacks a digital input and only has analog-in. The PLAYBAR, for example, has an optical input, and while that’s really intended for soundtrack audio from your TV or Blu-ray player, I’ve used it before with regular stereo sources to great result. 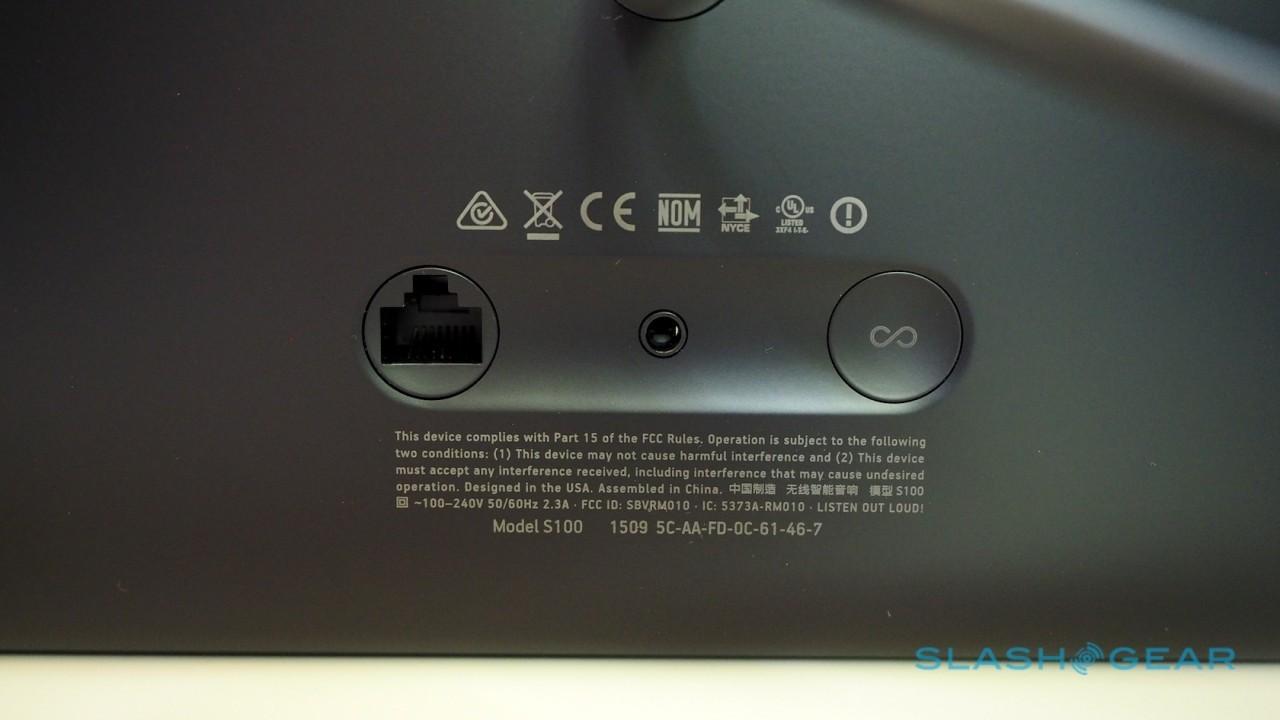 Instead, Sonos would rather you used the variety of streaming sources available – Apple Music is expected to be supported before the end of the year – or offline tracks saved to your computer, phone, or network-attached storage.

The Sonos app has had its rough patches, and it’s still not quite as straightforward at times as back in the earlier days. I’m of a mind to put that down in no small part to the greater number of third-party sources it now supports compared to then.

All the same, having lived with Amazon’s Echo and its voice controlled Prime Music playback for some time now, I’d love to see Sonos enable speech recognition for playlists and tracks.

Streaming music has come a long way in the five years since Sonos launched the original PLAY:5 – née S5 – with some of the biggest changes being cost of entry. Sonos’ own range is more affordable, with the $199 PLAY:1, but alternatives like Google’s Chromecast Audio – at $35 – are even cheaper, albeit with the additional expense of separate speakers.

Is there, then, a place for a $499 wireless speaker – or, if you want stereo, a $998 pair? Having lived with the new Sonos PLAY:5 I’m minded to say yes. Sound quality is noticeably improved, the convenience of a one-box system is hard to overstate, and as always Sonos hits the fundamentals like perfectly synchronized multi-zone playback without breaking a sweat. 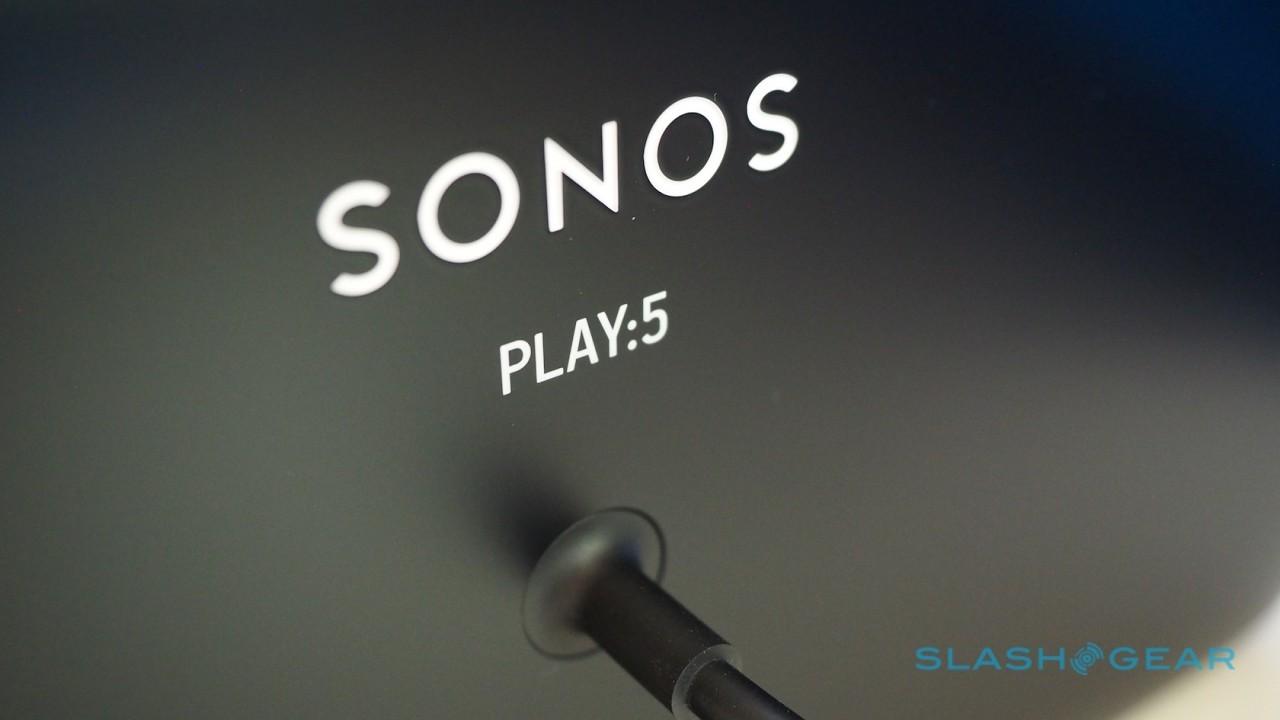 PLAY:1 will remain the gateway drug to Sonos ownership, and you could make a legitimate argument for a pair of PLAY:3 (at $598 altogether) instead of a single PLAY:5.

Nonetheless, even compared to the latter setup, the PLAY:5 sparkles that little bit more. Sonos may not release new products every day, but when it does they’re not only memorable, but they come with improvements like Trueplay that don’t leave older models behind. If the company can distill the clear charms of the PLAY:5 into a revamp of the rest of its range, all the better.