If you read our interview article with the Sleek Audio founders last week, you’ll know that we’re excited about the upcoming wireless system based on Kleer’s lossless technology.  At the root of it all, though, are the SA6 earphones, promising flexibility in sound reproduction at the earbud itself, rather than relying on artificial equalizer tweaks.  SlashGear has been testing out the Sleek Audio SA6 earphones for the past few weeks, and we’ve hit pause just long enough for the full review.

First impressions are good, with the SA6’s being smaller but no less sturdy than rivals from Ultimate Ears and other high-end earphone manufacturers.  There’s a fair amount to be explored in the foam-cushioned box: the earbuds themselves, pre-fitted with the medium silicone tips, neutral treble tubes and bass tubes, positive and negative versions of the treble and bass tubes, small and large tips and a removable 60-inch cable.  There’s also a hard-plastic carry-case, with a pull-out tray for the earbuds around which the cable can be wound, and two small tools for swapping out the different frequency tubes and cleaning inside the silicone tips.  A seemingly late addition to the package is a pair of “extended high frequency” treble tubes. 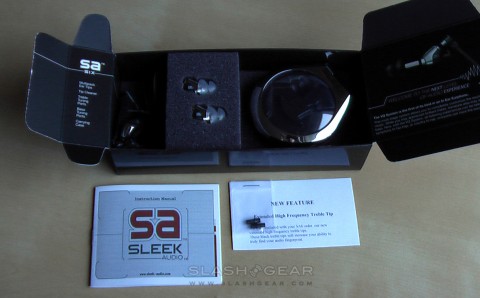 Build-quality of the earbuds themselves is high, with the silicone tips fitting snuggly and the treble tubes almost too tight until you reach for the specially-designed tool.  My only point of concern is the bass plug design, which I feel slips out a little too easily.  Sleek do sell the bass ports and treble tubes separately – at $12.50 for each set of three – together with the ear tips at $9.99, but I’d rather not have to buy a full array just to replace a single dropped piece.

The detachable cable is a neat touch, though, paving the way for the wireless system (which will sit around the back of the neck) and offering a relatively inexpensive ($24.99) replacement should you accidentally sever the wire.  Currently only a black, 48-inch long cable is available (with gold-plated plugs at either end) but Sleek apparently plan on offering different colors and sizes, and even custom-lengths.

In the ear, the range of tip sizes means you’re far more likely to find a fit that’s both comfortable and secure.  While the images may make the SA6’s look large, there’s actually little to be seen once they’re in-place; the plug-in design of the cable also means you can choose whether to let it hang down or swivel up and back over your ears. 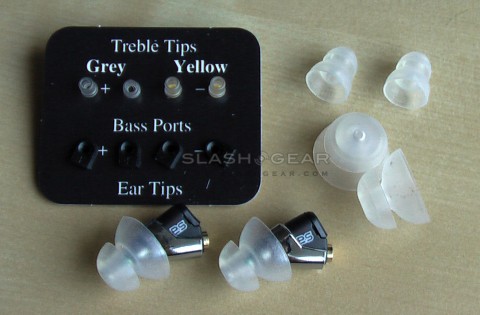 Sleek Audio recommend that you avoid immediately swapping out the frequency-neutral tubes and instead re-listen to old favorite tracks to get a better idea of what you want from your music.  On first play, with tracks from Amy Winehouse’s album Back to Black encoded at 192kbps, I was a little disappointed.  Yes, the sound was clear and certainly loud enough, but there was none of the sparkle company co-founder Mark Krywko had promised.

Instead, I had to do a little footwork first: re-ripping the album at 320kbps.  The change, even with the standard tubes, was obvious.  Balanced across the board from bass through to treble, to my tastes it lacked a little momentum in both the low and top ends, but details were still clear and defined.

Shifting up a gear to tracks encoded in lossless formats brought another tidal-wave of quality.  Now the definition observed in the 320kbps tracks was even cleaner, still without particular highlighting to the treble or bass but each tiny detail was noticeable and each instrument – played or vocal – felt like it had its own audio space.

It’s difficult to qualitatively test and explain audio performance, not least because everybody’s interpretation varies of what a track should sound like.  Of course that’s where the SA6’s come into their own: the ability to flip out the treble and/or bass tubes and tune the earphones to your personal tastes.  With the supplied three bass plugs and three treble tubes – each marked plus, neutral or minus – there’s plenty of scope for emphasizing whichever aspect of the audio you prefer. 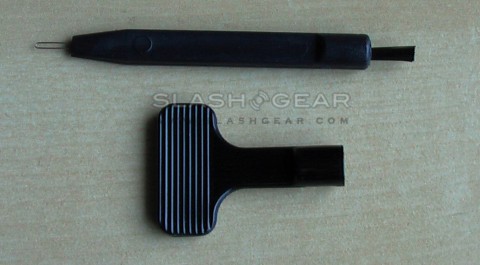 Swapping out the bass plugs to the minus option left me a little cold, with audio sounding top-heavy and over-vocalized.  The crunchy basslines and much of the rhythm was lost, in a setup unsuited to the sort of music I was testing with.  Slot in the plus tubes, however, and it was a revelation; thick, satisfying bass which manages both clarity – in reproducing the individual beats and doing so quickly – and texture.

The alternate treble tubes are similarly effective in changing the audio, although in perhaps a different way.  With the minus set the clarity and note differentiation weren’t lost, merely the frequencies more subdued leaving the mid-range and bass to occupy the space.  The plus set, meanwhile, really brought out that sparkle I’d been promised, and even more so with the new extended frequency tubes; in fact, when I switched briefly to some instrumental classical music, the higher strings and woodwind was almost too defined with the new tubes, and worked far better with the equal or basic plus tubes.

Consistent throughout is the mid-range, pretty much unaffected by whichever bass or treble tubes you select.  Vocals sound natural and just tipped over to the warm sound, adding up to something particularly listenable.

With my tastes obviously leaning toward the plus-marked tubes, I did wonder in passing what the purpose of all this flexibility was – why not just fit those options as standard?  Of course, your ears will be different to mine, your tastes different and your musical choices different too.  If I spent my days listening to string quartets I’d probably have come to a different decision.

There’s also a lot to be said for the journey of finding which setup is your favorite; while I may not have settled upon the other bass and treble options, they did highlight different aspects of the music that previously I hadn’t noticed.  That increased familiarity has left me a more contented, interested listener.  It can be a safer experience, too; the balance of frequencies mean subtle aspects of the track don’t get lost among the power, so the overall volume can be lower and less risk of damaging your ears. 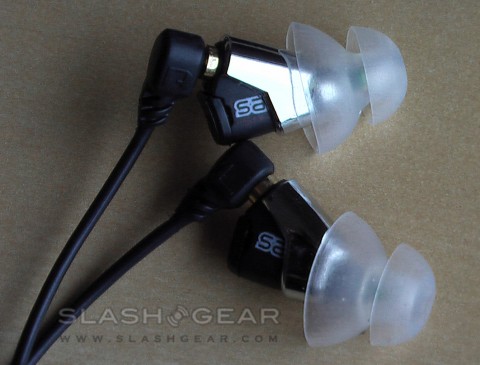 Ironically, Sleek Audio have now given me a lot of homework to do: re-ripping all of my CDs as lossless tracks.  Previously, with the aftermarket Sony earphones that were my daily drivers, I couldn’t notice any significant difference between middling bitrates and higher; the SA6’s have motivated me to go back, re-rip and see what other musical details I previously overlooked.

Best of all, with the start of Kleer wireless pre-orders, Sleek Audio have dropped the price of the wired SA6 earphones.  What once would cost you $249.99 can now be had for $209.99; perhaps not “cheap”, but for what you get – in terms of build quality, customization flexibility and, most of all, sound quality – it’s a bargain.

We’re waiting for the first wireless adapters to ship so that we can try them out with the SA6’s; given the quality of sound reproduction I’m now used to, they’ll have a lot to live up to.