Should I worry if my phone’s brand is failing?

Today we’re taking a quick look at all the major smartphone brands to divine their future health. If you’re the sort of person that keeps a smartphone longer than a year, you’ll do well to have a basic knowledge of the current state of the device’s software updates. If your phone brand falls behind on software updates, chances increase that your phone will be targeted by malicious entities. Like, hackers and stuff.

If you’ve got a smartphone with a brand that’s big, and the brand is doing well, chances are you’ll get software updates aplenty. That’s not ALWAYS true, but it’s been true enough over the past decade that it’s a pretty reasonable expectation. One generally follows the other.

If you have a phone from a brand of which most people’ve never heard, you probably won’t get a lot in the way of software updates. It’s because of THIS expectation that some small brands have grown at HIGH SPEED. Small brands that surprise their early patrons with good software support often find themselves in possession of long-lasting brand loyalists. 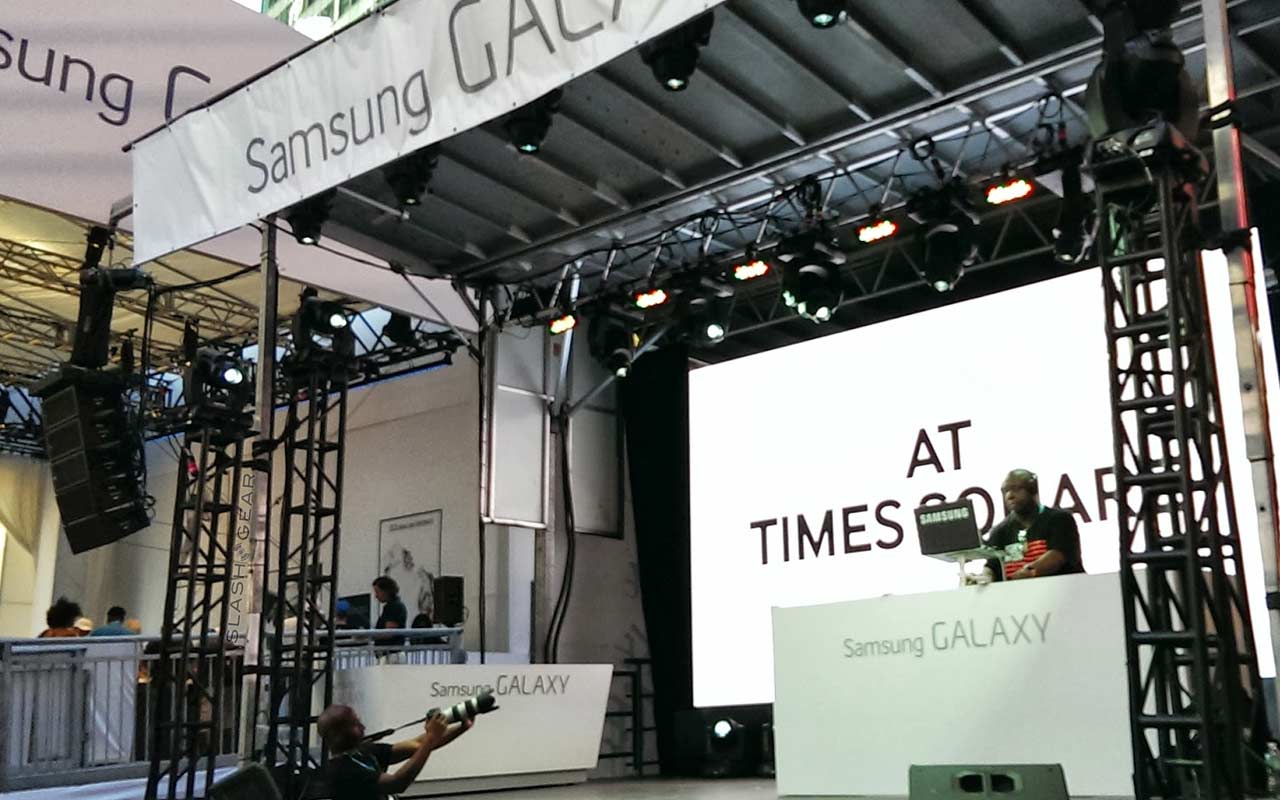 Conversely, well-known brands that sell phones that are quickly abandoned by their makers find themselves losing customers. In the year 2017 I wrote an article about how great it was to be a Motorola smartphone user. Not really long after that moment in history, Motorola stopped being a company that released software updates with any sort of surprising speed.

In that article I suggested that Motorola was one of the best smartphone brands on the planet! I wrote that WITH the following disclaimer: “JUST so long as they keep the heat on when it comes to software updates! I’m holding you to the standards you yourself set, MOTO – don’t let me down!” 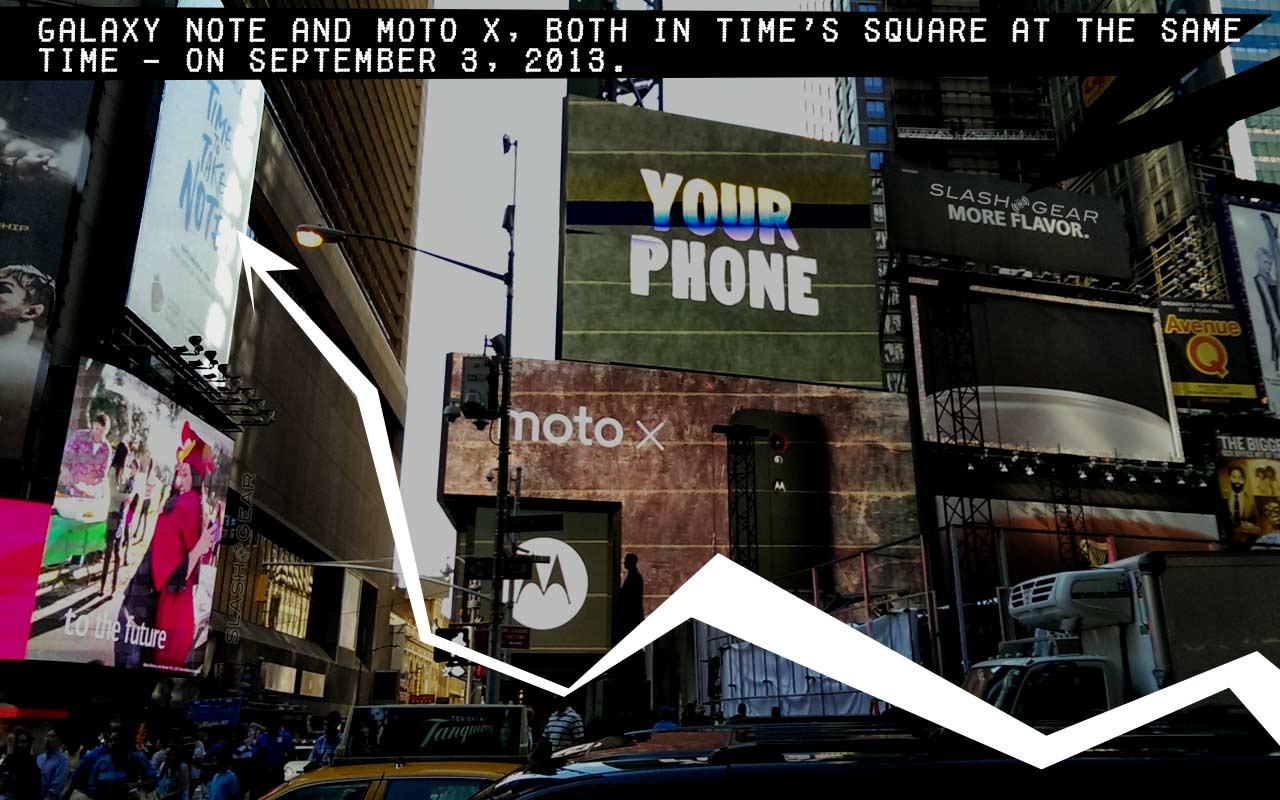 They sorta… didn’t keep the pace they’d set. Since then, Motorola’s not really done particularly well overall. Lenovo owns Motorola and is generally tabulated as a single company whenever it’s included in a list for smartphone sales analytics. The combined company – known as Lenovo – is in 7th place overall for global smartphone shipments for the second quarter of the year 2019.

That’s according to the Quarterly Market Monitor Q2 2019 from Counterpoint, who put the top companies on this list as such: 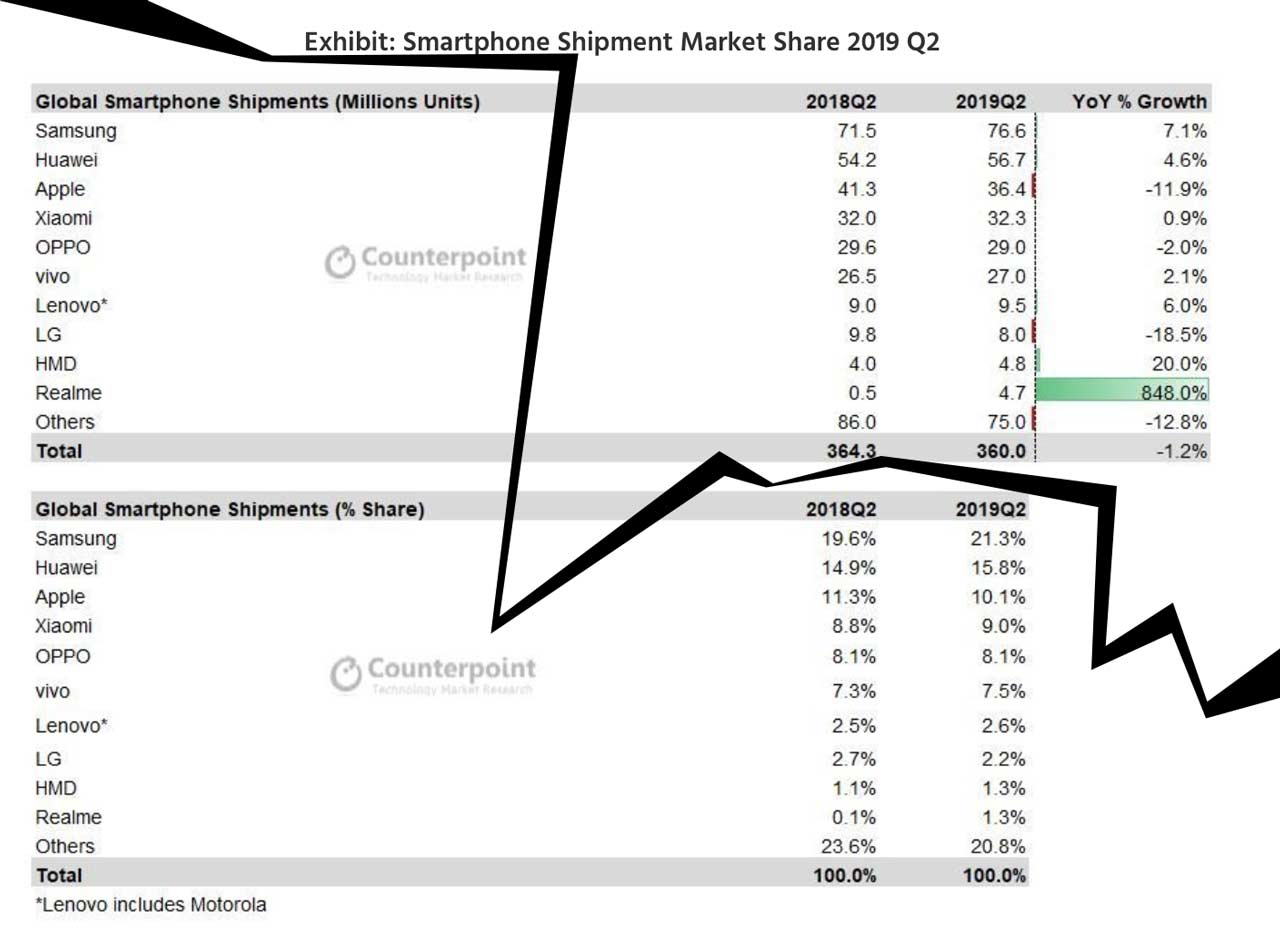 My favorite brand is losing to… Realme?

If you look at the chart you’ll see the brand Realme exploding with growth. It’s a little odd, seeing this happen, as the brand was just officially established on May 4, 2018. The situation is clarified slightly in learning that the “parent organization” of Realme is BBK Electronics.

BBK Electronics is a parent organization over various smartphone brands in a way that’s slightly more stealthy than Lenovo over Motorola. BBK Electronics isn’t listed by Counterpoint, or they’d collectively give Samsung a run for its money.

BBK Electronics is the parent of OPPO, vivo, and Realme – and a brand you’ve likely heard of but does not currently roll in the top 10 brands worldwide this quarter: OnePlus!

Is my brand failing?

If your phone’s brand is in the top 10 list above, chances are it’s not going out of business any time soon. Year-over-year comparisons show growth or a relatively insignificant fall in unit shipments, for the most part. Let’s take a quick look at a few examples.

• Apple: Apple’s year-over-year growth is negative 11.9%. That’s potentially significant, save their position as de-facto brand-to-beat in the United States with the most popular smartphone brand in the history of the smartphone: the iPhone. They’re not going to stop providing iOS updates to your iPhone for less than 3 years, any time soon.

• LG: LG had a year-over-year growth of -18.5%, which is pretty significant, no matter the angle at which you view it. They’re still running with 2.2% of the market where a year ago they had 2.7% of the market, which still puts them nearly a whole percentage point above the next-closest competitor in HMD and/or Realme, but still…

SEE ALSO: Why we write about phones you can’t buy

LG is the only US-centric* brand on this list that I can’t put my full faith for the long-hall for smartphone software support. Meanwhile I’m not particularly comfortable predicting the future of software support for Huawei, Xiaomi, HMD, or the various BBK Electronics brands.

*This article originally mistakenly suggested that LG was a US-based brand when in reality LG’s base is South Korea. (Thanks Jake!) It’s like LG’s been such a staple of the United States’ consumer smartphone brand lineup for so long, they seem domestic! This also opens a whole different can of worms that runs through the many monstrous accusations of intent that’ve been levied over the past several years at brands aplenty – particularly those based in China. You might want to explore Chinese smartphones are good, but stigma and business ethics are holding them back.

• Google: Google isn’t in the top 10 brands list for smartphone units sold for the second quarter of this year. Google is a special case, in a way sort of similar to that of Apple, where they’re an established controller of one of the most important pieces of the global smartphone market. Apple controls iOS, and Google leads development in Android.

Google’s position over the past decade in smartphones has been primarily focused on Android, the software, but has grown ever stronger in representing via hardware. With each successive Google Pixel smartphone over the past several years, Google’s only grown more dedicated to growing and supporting their Pixel smartphone brand, despite their relatively slow speed of growth in hardware sales.

If I had to pick two brands I trusted most to both remain in business and support their smartphones with software (OS and security updates alike), it’d be Google and Apple. Right this minute, Google and Apple seem to me to be the most laser-focused brands in the world in assuring consumers that their one hero line of phone remains eternally great.

If you have a phone from any of the following brands, I’d say you’re safe for software updates for the next several years after initial purchase of a new phone.

Runners-up include Motorola and OnePlus, and I’m hoping to be convinced of more brands soon. That goes for every brand, both new and established, large and small.