Should I be ashamed of wearing Google Glass?

I love new technology, and I love wearables, and I love Google Glass, but I can’t wear it out in public. Google’s head-mounted computer is gradually proliferating, as the company opens up its pyramid-scheme of invitations, but the numbers are still small, and though I appreciate the functionality Glass brings, I’m struggling to sport it out in the wild without extreme self-consciousness. As a geek among geeks in San Francisco, there should be nothing holding me back; as a vocal advocate of wearables, I ought to be flying the flag with my fifteen-hundred-dollar early-adopter beacon. So what’s taking the gloss off Glass?

I’m not proud of my paling geek credentials. I’ve had Glass for several months now, and it’s not to say its been infrequently used: as a hands-free camera it’s incredibly useful, whether you’re documenting smartphones and tablets and want both hands to demonstrate, or if you’re test-driving a car and want the POV from behind the wheel.

Most days, as I’m working at my desk, I’ll be wearing Glass, watching as notifications and alerts pop into my eye-line. The recent XE12 update with Hangouts chat support makes that all the more useful. Even just the hardware itself has a sci-fi appeal to it: just as the iPad mini is probably the closest embodiment to a slim Star Trek PADD we have today, Glass – despite containing similar hardware to a low-spec smartphone – is undeniably futuristic, unusual.

That doesn’t stop me feeling like a fraud. Since before I started writing publicly about wearable technology, I’ve been a loud convert to the concept. I used to look at the outlandish, gawky rigs that wearables pioneers like Professor Steve Mann would don, and say “sure, I’d wear that too, if I could afford it.”

When Glass was first announced, then, it was an immediate “must have” for me. True, Explorer Edition buyers were effectively paying Google – handsomely – for the privilege of being beta-testers, but the geek appeal was off the scale. This was the man-machine crossover we’d been promised, and the prospect of getting in on the ground floor was too much to miss out on.

So, Glass gets used, but I seldom wear it out. I don’t put it on when I’m going to the store, or to the park, or to grab a coffee. I’ve used its tremendously handy navigation functionality, but always been more than a little aware of it conspicuously perched on my head. Maybe if I had children, or a sports team to follow – Glass seems particularly popular with those who spend time documenting both – I’d be less self-conscious, more compelled to take advantage of the headset’s capabilities while in the public gaze, but I have neither. 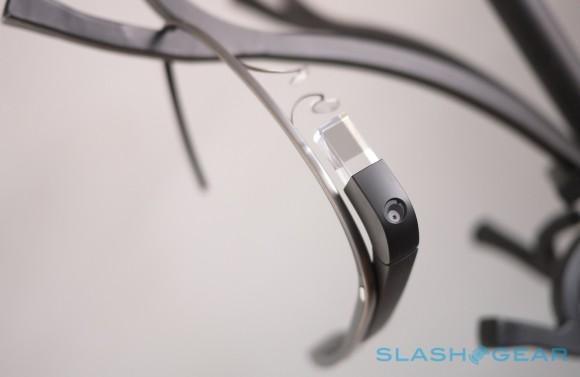 It could be because I’m British. Now, that might sound flippant, but there’s certainly a difference in how us Brits perceive unusual things like Glass compared to our American cousins. While I love my sarcastic, cynical countryfolk, I can’t help but admire what’s a stereotypically more gung-ho, open-minded, far less jaded approach to things that those in the US often bring to the party.

In fact, whereas some are happy to hold loud – and personal – conversations on their cellphones on the bus, I’m loathe to even have the ringer turned on. Perhaps I’m an extreme example, but I’d wager there are just as many toward my reticent end of the spectrum as there are at the more vocal end.

Ironically, though, it’s in wearables that I hold out hope for a solution to that; it’s just not in gen-1 Glass. Technology that blends more seamlessly with our bodies will help minimize what distraction it presents; better meshing of the digital world with the real world will stop us from inserting phones and tablets between ourselves and instead allow for more natural, free-flowing engagement.

Glass is a precursor but it isn’t there yet

Glass is a precursor but it isn’t there yet. It doesn’t play well with my prescription glasses (and may not even when the official solution comes out), and the battery life is poor, while the functionality – though growing each month with every OS update Google releases – is still limited and, often at the times you’re trying to demonstrate it, can be patchy in its success rate. I’d argue my feedback is just as valuable as that of those who wear it every moment they can, however; Google needs input from the shy and self-conscious too, otherwise it could – mistakenly – assume Glass was ready for release as it is today.

I’m also of a mind that periodic wear, rather than continuous, is just as legitimate a use-case for Glass: the best tool at the correct time. Right now it’s a geek’s toy, and that’s proving insufficient to overcome what social anxiety I obviously feel about wearing it – and explaining it – out in public.

I’m going to be pushing myself to change that, though, not least because the increasing capabilities Glass is gaining are tipping things ever-further in its favor. Google’s challenge – and the challenge of companies pushing wearable tech in general – is that there are plenty of others out there much like me, who need sufficient justification to overcome not only skepticism but self-consciousness, and for whom there’s more than just price standing in the way of sporting a computer on their face.

It’s possible, after all we saw Bluetooth headsets go from ridiculous to mainstream in a relatively short period of time, but it will take some compelling arguments to do it. The Glass team is starting out in the right way, taking wearables on the road in a number of cities across the US, but it could still take a while before Google’s vision of the future matches up to how we see ourselves.