This Tuesday on a rather sunny post-hurricane NYC afternoon, Samsung announced their newest version of the top-selling Android smartphone, in this iteration called the Samsung Galaxy S II Epic 4G Touch. We’ve seen just a little bit of this device in the past, it having had a tiny outing earlier today, press shots, and a family outing having taken place last week. What makes this new device unique compared to the original version is a handful of new features, the most obvious of these being the larger 4.52-inch display.

This device is the first of several Samsung Galaxy S II based devices to be released here in the United States, this WiMAX version sporting a collection of carrier-based apps alongside what Samsung has revealed as a brand new twist on their TouchWiz interface.

Another spec you may recognize from the original version of the Galaxy S II is the 1.2GHz dual-core processor under the hood – this combined with the gigantic 4.5-inch Super AMOLED Plus display we’ve seen in action before on our Samsung Infuse 4G from AT&T is set up to be a double-whammy without a doubt.

What we’re seeing here with our own fingers wrapped around the device is a very similar device to what we’ve seen in the Galaxy S II released internationally and the Infuse 4G, again a 4.5-inch Samsung device with a single-core processor.

Have a look at our hands-on video here for the full rundown. 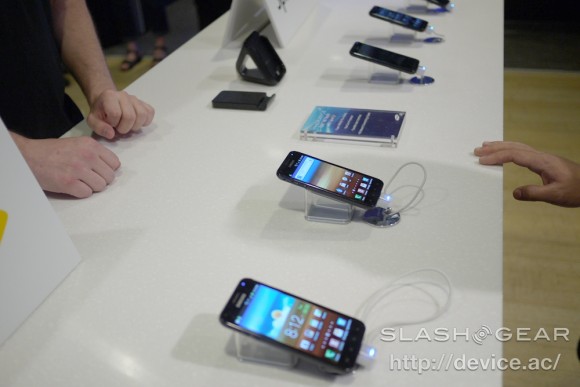 Also head back to the original announcement post for a total in-depth look at what the specs are as we know them right this moment.

Spoiler: this is the first Galaxy S II set to be released here in the United States, with the AT&T version to come next, followed by the T-Mobile version last.