Samsung doesn’t have a Google Glass rival, but it does have a new wearable, and the Galaxy Gear smartwatch, and there’s no shortage of overlap between the two despite the obvious difference in form factors. Both make ample use of voice control, and both make compromises on the amount – and type – of data they show you in deference to the design and likely use-cases. We spent some time comparing Glass and Galaxy Gear to see how the two approaches shape up, and to get an early idea of whether we’ll be strapping a wearable to our face, or to our wrist.

Both Glass and the Galaxy Gear are more companion devices than standalone hardware, though Google’s headset is arguably more capable when it comes to operating outside the range of a smartphone. Each can tether via Bluetooth to your phone and borrow its data connection, but Glass also includes WiFi.

The experience when connected to a phone is considerably more comprehensive, however, on both devices. Each can act as a hands-free device for calls, and show text messages received; each can also use voice recognition to reply to them, though that demands a data connection since the actual processing is done server-side. Samsung says its S Voice accuracy is improved over previous generations, though we’ll need to test that out to see how confident we might be in its performance. In our experience, Google’s recognition algorithms have been more successful.

S Voice and Google voice command are also brought into play elsewhere, though more on Glass. The headset can in fact be used completely hands-free: head-tilt to wake Glass up, and then the familiar “OK Glass…” speech commands to give instructions. Nonetheless, you’ll need to reach for the side-mounted trackpad in order to interact with the message history and other content.

In contrast, Samsung’s smartwatch opts for touch first, speech second. That perhaps makes more sense considering a display on your wrist is generally further away than Glass is. Overall, we prefer Google’s approach of having Glass pretty much equally controllable by either voice or touch, though Samsung has done a good job of paring back the smartwatch UI to a point where it’s consistent across the device.

Hardware-wise, both have similar specifications: more akin to a low-end smartphone than anything else. Glass will capture 5-megapixel images versus the Galaxy Gear’s 1.9-megapixel, but the Samsung is easier to use since you get a preview image to compose your shot. Taking photos on Glass is more trial-and-error, since you only see the results after you capture the photo. On the flip side, while both default to 10 second video recordings at 720p resolution, on Glass you can optionally extend that to as long as you have storage (around 12GB user-accessible out of the box, versus the 4GB on the Samsung) and battery life. 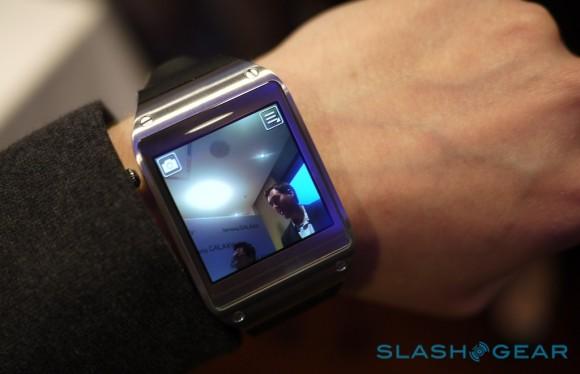 Each has a similar array of sensors, too, though use them differently. Glass can offer navigation instructions, tapping the GPS in your phone for a positioning fix, and then guiding you either on foot or by car using directions flagged up in your eyeline. It’s one of our favorite features of the wearable.

In contrast, while S Voice on Galaxy phones can be asked for directions, that’s not supported on the Samsung smartwatch. Meanwhile, unlike Glass, you also can’t perform web searches on the Galaxy Gear, though the watch can tap into your Pocket list and read out the articles you’ve previously saved using text-to-speech.

Where the Galaxy Gear has the edge is in health and fitness tracking. Samsung is pushing the activity monitoring side with a pedometer app and tie-ins with various app developers like RunKeeper and MyFitnessPal, and there’s a Memographer app on the watch which is intended to automatically piece together a timeline of events and photos when you have little time to snap photos, such as when taking part in sports. 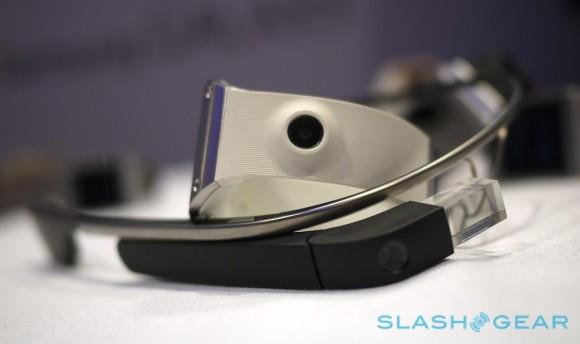 Interestingly, Google Now is already tracking footsteps – you get a Now card on your phone at the beginning of each month, telling you how many steps you’ve taken and how that compares to the previous month – but there’s no access to more granular data or, indeed, any way to see even how many steps it has tracked midway through.

Apps are the Glass weakness right now. Google has rudimentary Evernote, Path, Facebook, and Twitter support, along with a few others, but there’s still no app store for Glass, and developers are limited in what they can actually load onto the wearable. In contrast, Samsung has apparently been engaging with developers for some time now, to stock its Galaxy Gear store which will be available alongside the smartwatch when it launches in late September. To be completely fair, Google has been doing some of the developing itself: one of the recent updates to Glass added a rudimentary web browser, for instance, which the Samsung smartwatch lacks.

How usable that browser is comes down to the Glass display. Google’s panel is physically smaller – a tiny glass block floating in your eyeline – but the overall effect is more impressive than the 1.63-inch panel of the Samsung because it’s closer and so looks bigger. It’s also higher resolution, too – 640 x 360, versus the Galaxy Gear’s 360 x 360 square – and does reasonably well outdoors in bright light. We still have to see how the Super AMOLED Samsung has opted for copes in terms of outdoor visibility. 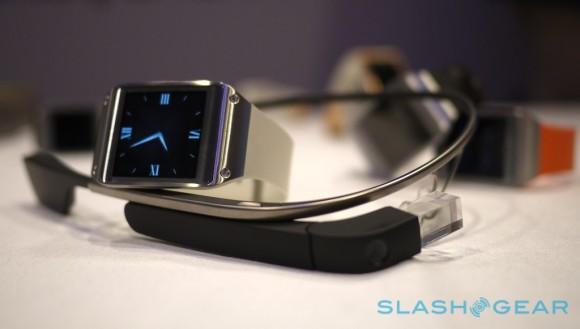 Of course, Google isn’t pinning its hopes solely on head-mounted displays. The company confirmed recently that it had acquired smartwatch developer WIMM Labs, and while it hasn’t said exactly what it will be doing with the team, the WIMM One developer kit gives a good idea of the potential.

A big factor will be price. Google’s Explorer Edition of Glass is a not-inconsiderable $1,500, though the company maintains that the eventual consumer version will be far cheaper. Samsung, meanwhile, is yet to confirm how much the Galaxy Gear will cost, either. Models like Sony’s Smartwatch 2 are coming in at around $180, though the functionality is considerably less advanced than Samsung’s version.

You can’t walk into a store and pick up Google Glass right now, and that’s unlikely to change until next year at the earliest. In contrast, Samsung says it expects to release the Galaxy Gear from September 25, alongside the Note 3 (with which it will be initially exclusive). In the early days, then, sheer availability will decide the first few battles of the wearables war, though the still-niche nature of the Samsung will probably keep its presence in the segment small.

We’ll know more when we have a Galaxy Gear in for review. Until then, check out our full hands-on report for more details on just what the Gear can – and can’t – do.