Today a collection of screenshots have been revealed of what appears very much to be a Samsung “smartwatch” with the name GALAXY ALtius attached to it. The images shown here come from a Korean messageboard where the main topic of conversation is how well the watch will fit in with the rest of the market rather than if the mysterious device exists. Given the recent fervor created by the idea of an Apple iWatch, could the Samsung smartwatch, indeed, be far behind?

This series of screen-grabs includes the name GALAXY Altius, one that we’ve heard in a set of rumors very recently attached to what was thought to be the Galaxy S IV – another device rumored to be revealed soon. This device has SKT and SKTelecom on several shots, this indicating that it will be carried with a data plan on that particular South Korean mobile service. Though the software here does appear to have an Android-type look to it, it could just as easily be a basic Java-based interface not unlike what we’re seeing with today’s reveal of the REX series from Samsung. 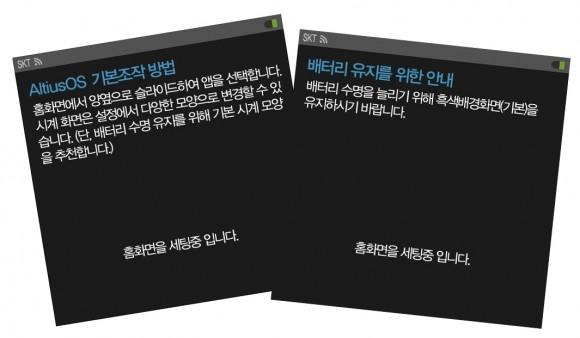 In the upper right-hand corner of a couple of the shots, you’ll see the “Samsung-GA7” code name – this indicative of the LCD display. You’ll find that the software version is AltiusOS beta2, this either meaning that the software was built specifically for this device, or that it’s a version of Android (or some Samsung-specific OS) fitted for this device. You’ll also find that 1.5% of the full 235MB of internal storage space is being used up – this makes the case for a rather symbiotic device rather than a stand-along model.

The final screenshot shows a series of tiles that each have their own purpose – the first is a music player, the second a clock, another a connection to your email with a little “2” in the corner to show how many messages you’ve got left to read. The fact that the last two tiles are off to the right of the display while a bar at the bottom shows a bit of a “slider” situation shows that this device will quite likely have a touchscreen display.

Each shot here is 500 x 500 pixels, this possibly indicating that the display is working with 500 x 500 pixel resolution – we don’t know for certain because the original delivery here isn’t verified as straight from the device. That said, such a resolution is quite possible given the current standards for smart devices – especially Samsung-made Galaxy devices.

It’s also worth noting that the name Samsung Galaxy Altius was sent to SamMobile on the 22nd of January as a Samsung flagship device. Though they’ve separately confirmed the Samsung Galaxy S IV to be working with the name GT-I9500, the connection to the name Altius could just as easily be assigned to the Samsung smartwatch Altius. It’s also possible – however unlikely – that both the Galaxy S IV and the Samsung smartwatch are working with the name Altius as a sort of “family name” for this next generation of smart device releases.

Have a peek at the timeline below covering the full gamut of recent Samsung next-generation tips and suggestions and stay tuned for more action on SlashGear in the Samsung tag portal as well! Click any of the images in the gallery below for larger more close-up versions of the images you see above.