Earlier today it was revealed that evidence Samsung spilled to the press in their trial against Apple regarding supposed Sony pre-cursors to the iPhone was not supposed to be seen. Federal Judge Lucy Koh had previously blocked said evidence from the trial altogether, and both Apple and the judge have since earlier today come down on Samsung demanding an explanation for Samsung releasing documents to news outlets. Samsung is now on the hot-seat speaking on why they found transmitting these documents to the public “entirely consistent with this Court’s statements” – these statements saying that, “workings of litigation must be open to public view.”

What appears very much to be happening here is a war of public opinion rather than an effort on Samsung’s part to influence the jury. While the documents are not allowed to be shown in the actual court proceedings, they do appear to be “public” as Samsung suggests, as they were part of pretrial filings. This all may have been alright, to a degree, save for the comments included with the emails sent out to the press with the images:

“The Judge’s exclusion of evidence on independent creation meant that even though Apple was allowed to inaccurately argue to the jury that the F700 was an iPhone copy, Samsung was not allowed to tell the jury the full story and show the pre-iPhone design for that and other phones that were in development at Samsung in 2006, before the iPhone. Fundamental fairness requires that the jury decide the case based on all the evidence.” – Samsung PR message to the press 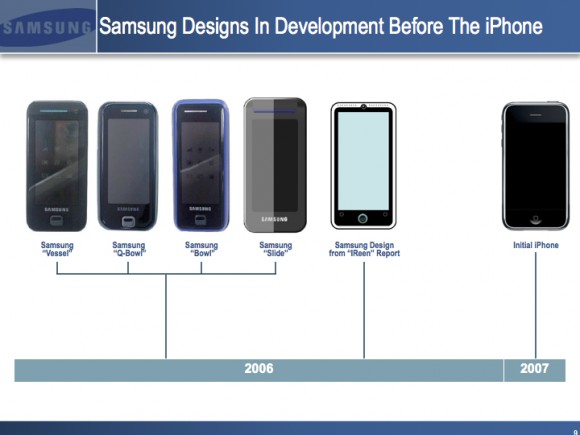 With such a statement, Samsung will have a hard time convincing the judge that they did not in one way or another intend for the evidence to reach the jury, or at least to influence the media and the public to push for the evidence to be seen with their point of view. Apple’s counsel William Lee found the letter Samsung gave to the court today in explanation of their actions to be unsatisfactory. According to Josh Lowensohn of CNET, Lee noted the following:

“Mr. Quinn’s declaration does not adress two of the Court’s questions: who drafted the statement and who released it. Samsung’s multiple references to the jury in its statement make plain its intent that the jurors in our case learn of arguments the Court has excluded through the press.” – Lee

Lee said that Apple will file an “emergency motion for sanctions” and will also seek “other relief that may be appropriate.”

On top of it all, there’s the actual evidence itself: inside you’ll find two major elements. The first is a list of Samsung devices that had supposedly been designed and rendered throughout 2006, this being before the iPhone was revealed in 2007. The second bit is deposition by Apple Design Inventor Shin Nishibori from back in May of 2012, he only speaking about how Johnathan Ive asked him to consider how Sony would design a smartphone – Nishibori’s first concept, revealed to Apple on the 13th of March, 2006, also had a Sony logo on it – though it’d apparently never been seen or owned by Sony at any time. 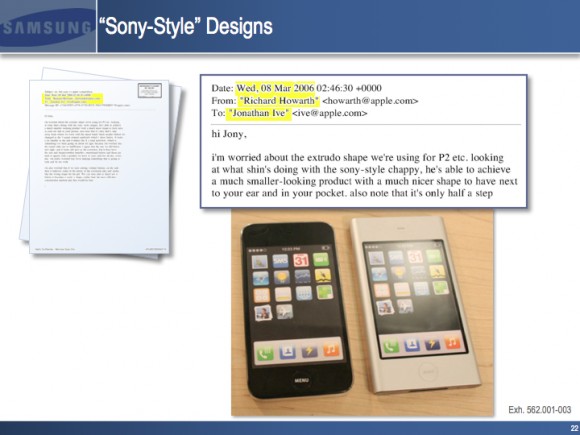 Have a peek at several bits of the evidence that Samsung collected and was ruled inadmissable in court above, then check out the full story as it unfolds in the timeline below as well. Stick around as Apple vs Samsung explodes across the techsphere!