Samsung has incurred the wrath of the judge in the Apple vs. Samsung case, after publicly releasing trial evidence it had been blocked from officially submitting to the ongoing patent battle. Pleading “fundamental fairness” as its justification, Samsung dropped a pair of presentations along with an official statement on the media, aiming to squash Apple’s claims that the Samsung F700 was an iPhone copy. “The excluded evidence would have established beyond doubt that Samsung did not copy the iPhone design” the company said, in a move Apple described as “contemptible.”

“The Judge’s exclusion of evidence on independent creation meant that even though Apple was allowed to inaccurately argue to the jury that the F700 was an iPhone copy, Samsung was not allowed to tell the jury the full story and show the pre-iPhone design for that and other phones that were in development at Samsung in 2006, before the iPhone” the South Korean company explained in its statement late on Tuesday. “Fundamental fairness requires that the jury decide the case based on all the evidence.”

Unsurprisingly, both the judge and Apple were quick to react to the documents’ release. “I want to know who drafted the press release, who authorized it from the legal team” Judge Lucy Koh demanded, AllThingsD reports, insisting on an immediate meeting with Samsung lawyer John Quinn.

Quinn had earlier “begged” the court to allow more discussion on whether the evidence should be accepted. Koh, however, was unrelenting, threatening sanctions against Samsung should it continue to push its appeal; that didn’t go down well with Quinn, Forbes reports, who couldn’t help but question the point of a trial which didn’t accept “key” evidence. “What’s the point of having a trial?” the lawyer asked. “They want to create a completely false impression that we came up with this design after January 2007.”

Samsung’s documentation primarily concerns the timeline of the F700’s aesthetic development, with the company aiming to demonstrate that it was already working on touchscreen-centric devices prior to the unveiling of the original iPhone. However, it also concerns the handiwork of ex-Apple designer Shin Nishibori, responsible for the so-called Nishibori Design of March 2006, for which he was tasked to imagine what Sony might do if they were to create Apple’s intended smartphone. 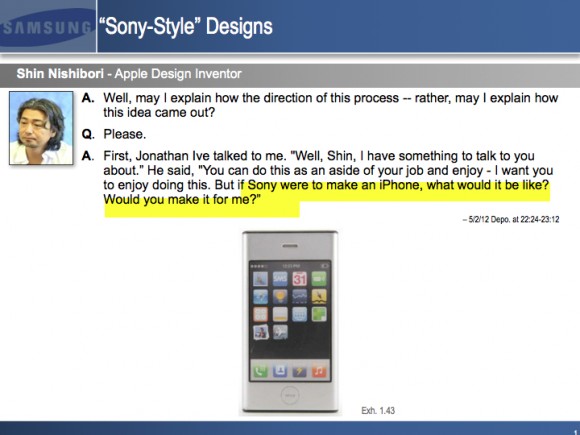 Nishibori will not appear at trial, but Samsung included several comments made by the designer during deposition in early 2012 along with an email from Apple designer Richard Howarth to Jonathan Ive citing the Nishibori Design and voicing concerns about Apple’s own strategy. It’s unclear how Samsung deals with the fact that the touchscreen-dominated so-called “Sony” design Apple is meant to have copied is, in fact, the Nishibori Design that Apple made itself:

Details of what sanctions might be applied to Samsung for its decision to go public with the evidence have not been released yet. The court has heard opening statements from both teams, with Apple contending that Samsung will use a “the devil made me do it” defense while Samsung argued that the iPhone had been an “inspiration” to all companies but that its own devices were competitive not copies.