Android and Samsung have such an all-encompassing strategy going on as of late that every tier of the smartphone market is saturated with a combination of the two, from the top all the way to the bottom – a good example of how to do the bottom RIGHT is in the device you see here, the Samsung DoubleTime. What we’re going to compare this device to are a few other similarly-stacked devices on AT&T, but you’ll understand before the end of this that AT&T’s selection of Android devices relies so heavily on top-tier smartphones that the Samsung DoubleTime may well have a market to do well in. Imagine that!

Before we go into the photos and the dropping of the knowledge on why you should or should not purchase this device in detail, have a peek at this hands-on look at the DoubleTime aside several other Android devices – compare and contrast time!

This little stormtrooper of the device has the oddest set of design cues, starting with the fact that it’s got pink accents on the physical Android menu buttons. Very strange choice by Samsung if I do say so myself. There’s a silvery plastic bar above the keys, Samsung and AT&T logos on the front, earpiece, and both proximity and light sensors. The device opens up like a clamshell the long way and sits at either a 135 or 180 degree angle when opened. Inside you’ll find the second of two 320 x 480 pixel displays on one side, a full QWERTY keyboard on the other side with what you’ll find is the reason for the pink accents on the outside: pink accents on the inside. 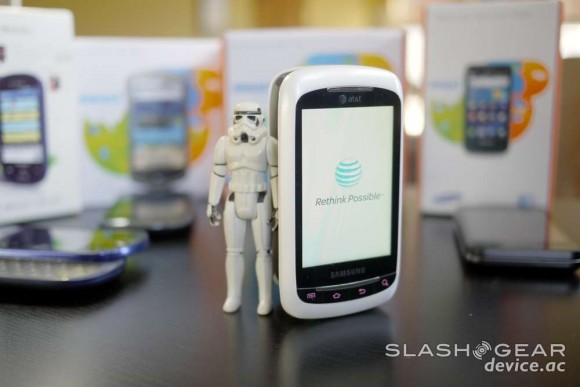 So thought it may be politically incorrect of me to assume that this device is aimed at the feminine ladies and gentlemen amongst us, I must say that a Star Wars fan looking for the perfect smartphone to go with his or her stormtrooper outfit should think twice about choosing the DoubleTime. That is of course unless they’re one of those fancy pink-painted troops, then this is the device for you! 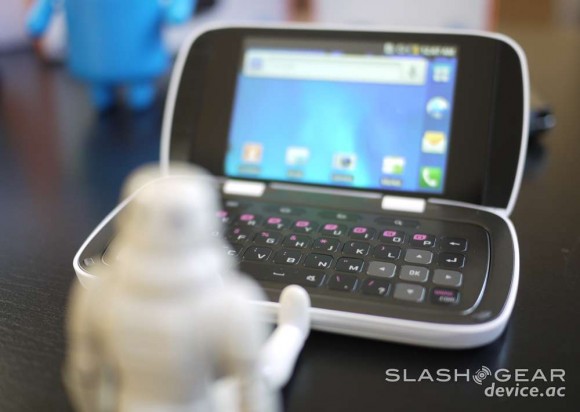 Otherwise the device is certainly cute, and dare I say it does feel relatively tough despite its mainly plastic chassis. One thing is certain, the whole rig is streets ahead of the Samsung Gravity Smart, a rather irritably low-quality device currently housed at T-Mobile. It just feels like Samsung put a bit more effort into the DoubleTime, if you know what I mean. 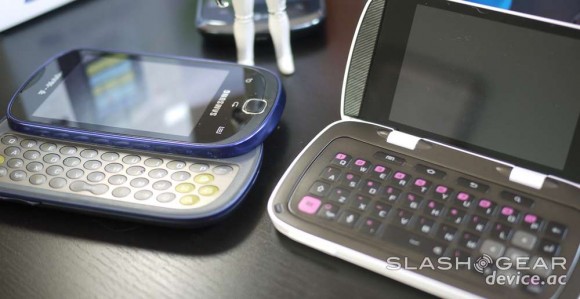 You’ll be running Android 2.2 Froyo with essentially no changes made from its original form – the only additions that either the manufacturer OR the carrier has made is a couple of AT&T applications that appear on the vast majority of the handsets released by them. Samsung has essentially abstained from adding anything in the way of software here, so it’s basically all Google. That means just two screens of apps out of the box with all the more space for you to fill the device up with your own apps from the Android Market. 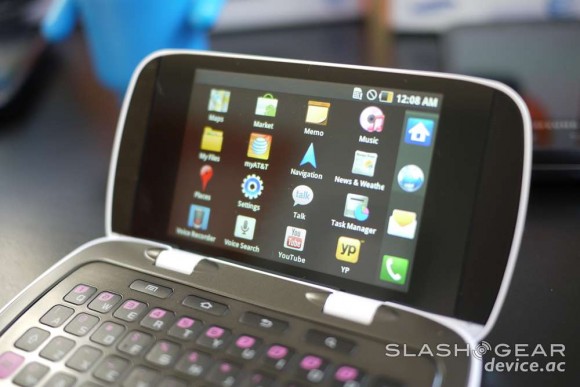 Inside you’ll also find a 600 MHz single-core processor from Qualcomm that may seem quick to you if you’ve never so much as laid a hand on a smartphone before, but not so perfectly hot if you’re moving from any other Android, BlackBerry, or Symbian device. I won’t even mention iPhone because everyone knows that there’s essentially just one model, and it only goes one speed: quick. You’ll be able to play quite a few basic games on this device and yes, stream some video, but you’ll primarily want to stick to things like social media, web browsing, texting, and calling. Call quality is just fine, by the way. Gone are the days of tin-can calls and bad reception, no worries here. 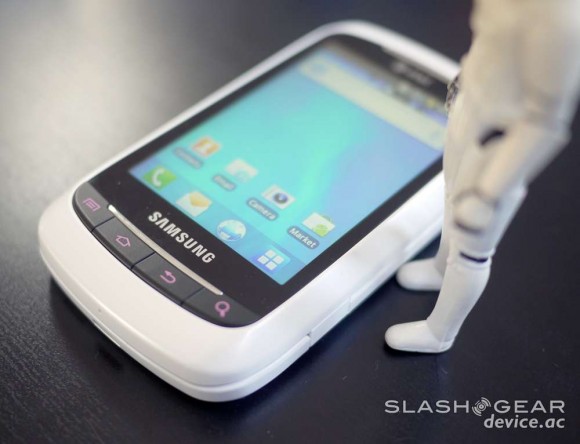 Not many nice things can be said about the camera here, especially since there’s only one and it’s a mere 3.2 megapixels, so I won’t say much at all. Instead here are a couple of examples of what you’ll end up capturing with this shooter which sits at 320 x 280 pixels for video and wont afford you much more than OK photos for your wallpaper on the device itself. Don’t expect many keepers here, is what I’m saying. 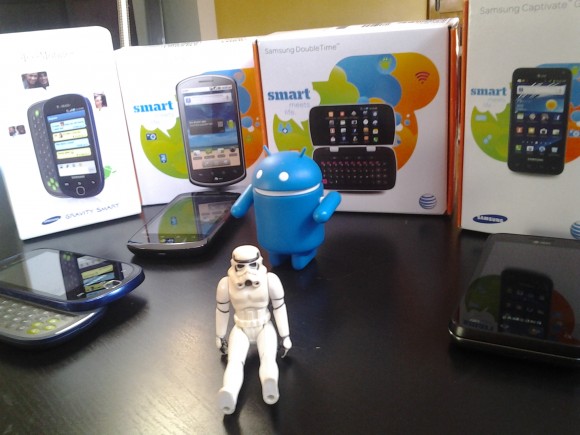 The battery should give you around 8 hours regardless of if you’re using the outside or the inside display since they’re essentially the same exact thing for drain and you can only have one on at a time. If you decide you want to watch video streaming from the internet with YouTube or any of the few streaming video apps available for the now-old Android 2.2 Froyo like Netflix – get ready for the death drop in battery time. We’re talking less than 2 hours, a couple of TV shows if you’re lucky. 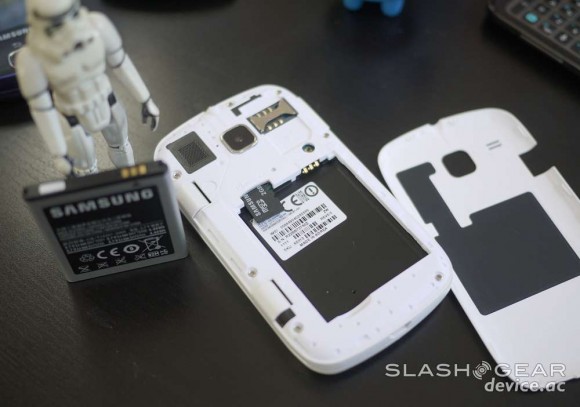 That said, normal activity like texting your pals, updating Facebook and Google+, and playing a tiny game or two will give you enough battery life that you’ll only have to charge it when you go to sleep and again when you’re in the car.

While this smartphone is far and away, not even in the same ballpark, basically not even the same sport as the top tier smartphones also made by Samsung such as the Galaxy S II or even the top of middle-tier devices like the Samsung Captivate Glide (also pictured below), it does hold some sway in its own lower level of internet-capable handsets. This device looks rather unique with its mostly white and black chassis and pink accents, and the double touch displays are certainly a nice touch. 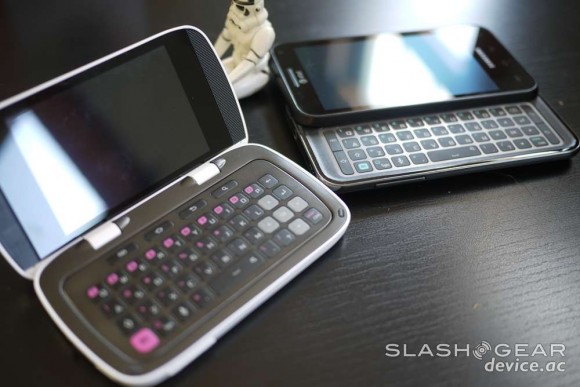 Get this phone if you’re the type of person who only plans on using this first-timer smartphone for email and Facebook posting. If you plan on racking up the data with a more costly plan per month, do yourself a favor and spend a bit more money at the outset so you don’t end up crying when you’re dropping loads of cash per month on a device that’s nowhere near the quality that the data costs should provide.