Samsung 55-inch OLED TV will go on sale this year

Samsung isn’t letting LG have all the OLED TV fun: it has a 55-inch OLED HDTV of its own, and it’s planning to launch it commercially later this year. The new set has the same smart TV functionality as Samsung’s LED and plasma TVs, as well as Voice Control, Motion Control and Face Recognition for navigating media and internet with your voice and waves of your hands.

The screen itself is produced from a single pane of glass, with each pixel having its own RGB sub-pixels. It’s apparently over 1,000 times faster than LED sets, but Super OLED actually uses less power than regular LCD sets.

You still get 3D functionality and dual core processor, with Samsung’s 1,400 smart TV apps offering everything from streaming access through Netflix, Hulu and other on-demand services, to weather updates, games, news and more. There’s social networking, too, along with AllShare Play to link – through cloud storage to remote smartphones, tablets, camera, computers and TVs.

Samsung isn’t saying how much the 55-inch OLED TV will cost – we’re guessing you’ll need a very well-padded bank account – but it’ll apparently go on sale later on this year. 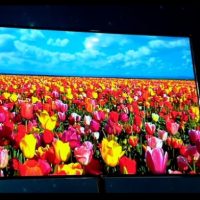 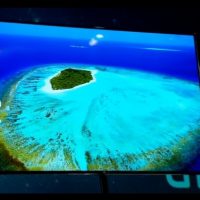 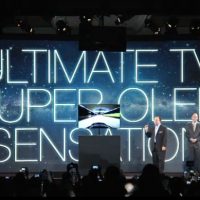