The Razor E Prime III Electric Scooter is the most robust electric mode of transport I’ve used so far. It’s made by the brand that made tiny folding scooters popular over the past decade in the biggest way – Razor. As such, we expect that we’ll have at least the quality we’ve come to expect from the main line. Razor knows this – and they’ve delivered.

The Razor E Prime III is not a cheap scooter. Razor knows that they’re a recognizable brand, and they’ve priced their hardware as such. They’ve not done so without delivering a high quality piece of machine, however – which is good. 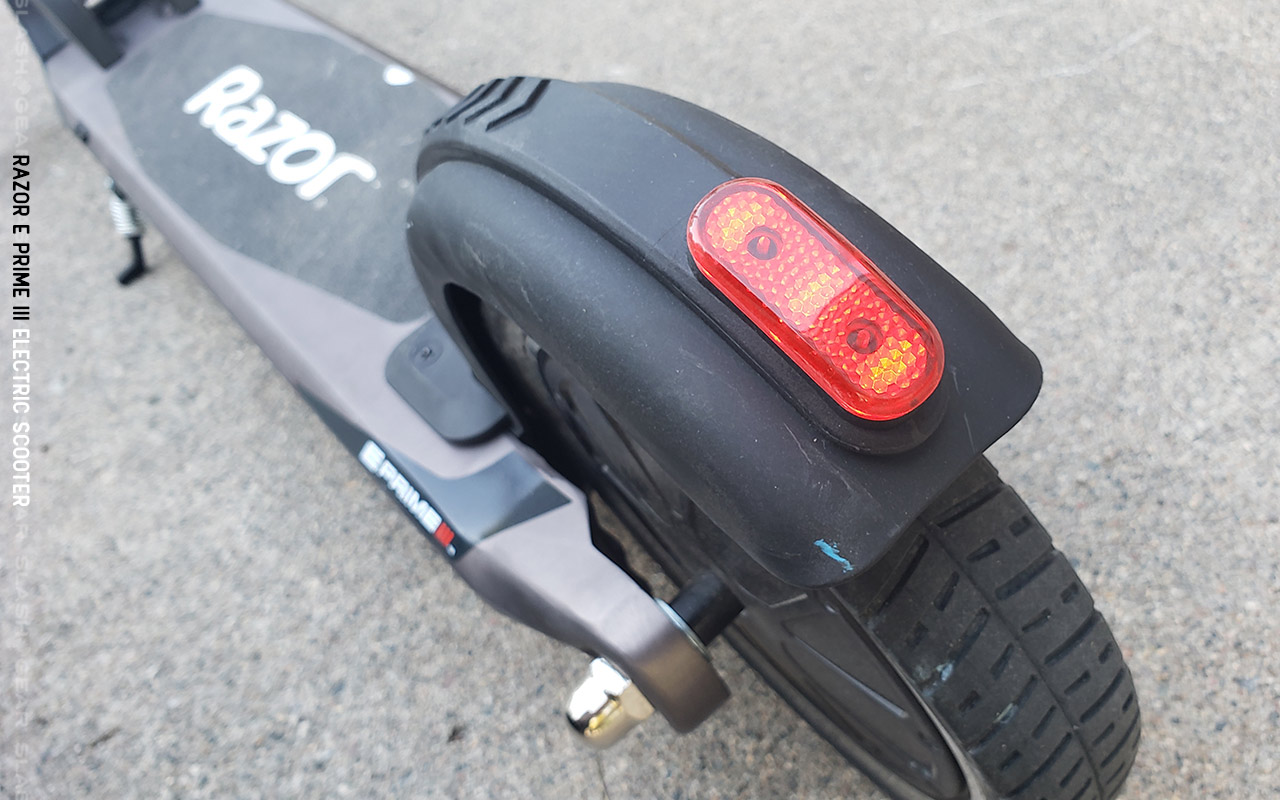 The Razor E Prime III is 24.2 lbs (11kg) heavy – it’s heavy, not light. It’s carry-friendly, certainly, but it’s not made to be NEARLY as mobile as their kick scooter lineup. But it’s not meant to be tiny, and it’s certainly not meant to be kicked around by the slightly younger crowd that rolls on the Razor A Scooter.

NOTE: If you’ve seen a Razor scooter out in the wild before, chances are it was a kick scooter. The most popular Razor scooter is the A Scooter, the one that’ll cost you around $45, the one that comes in a wide variety of color variations. The scooter you see in the review you’re reading now is an electric scooter that’s far more expensive because it’s in a completely different class. 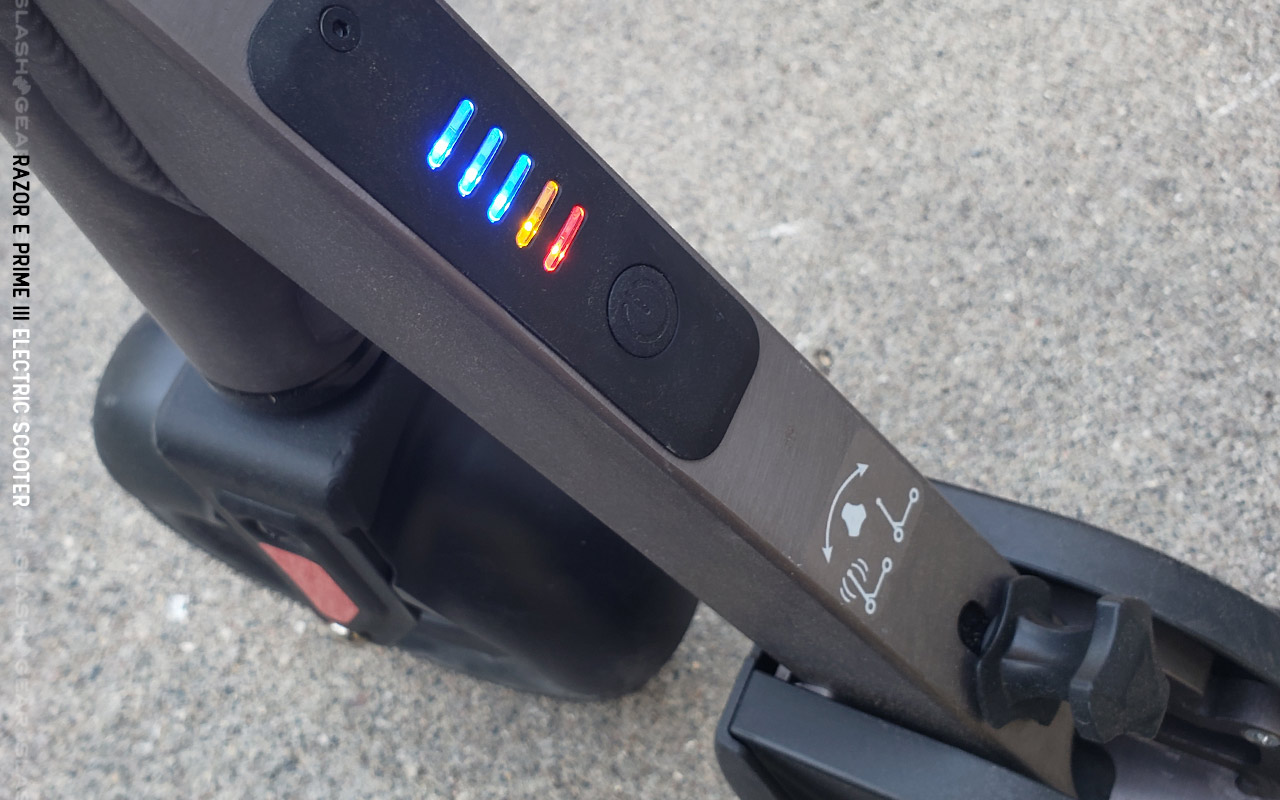 Razor is not a new company. They’ve designed their fair share of exceedingly successful scooters over the past decade. They know how to design scooters, and they’ve created a machine that looks and feels good with this E Prime III as a result. 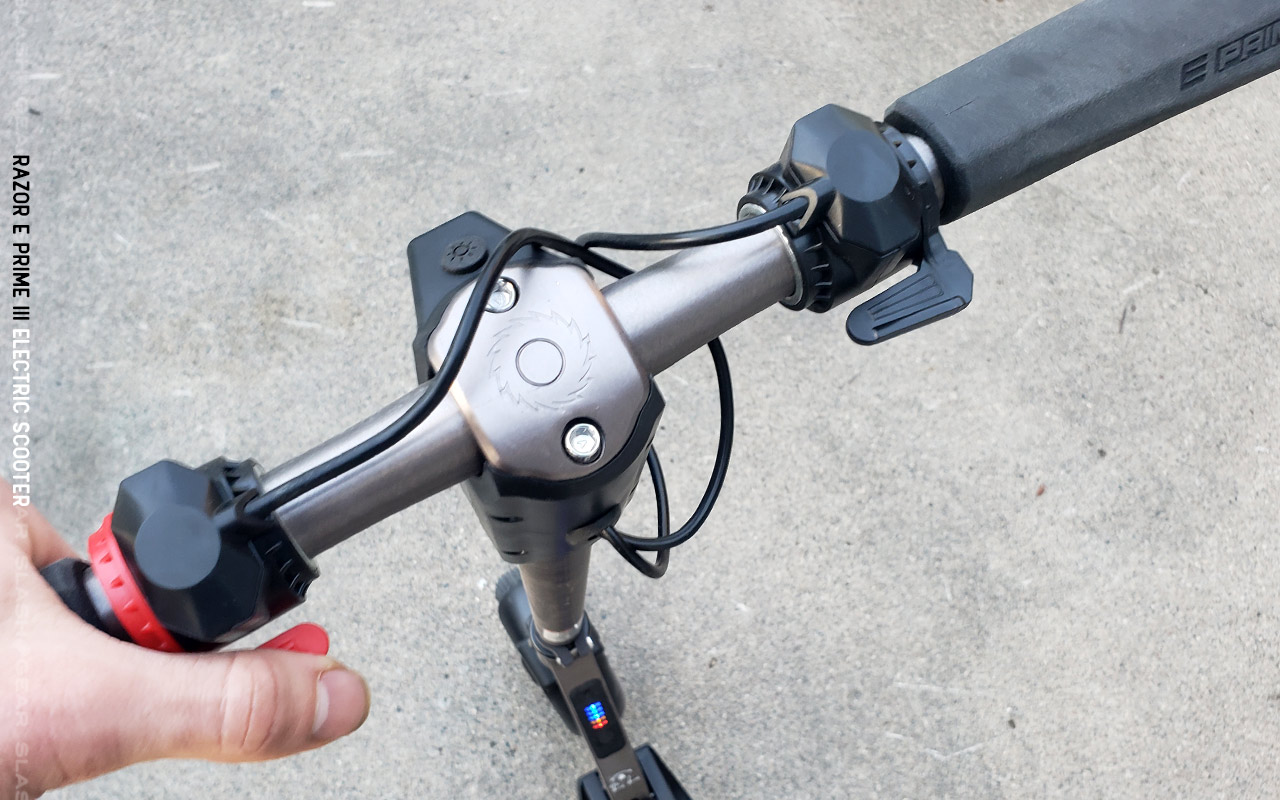 Folding the scooter down is a simple affair – quick and easy. The scooter doesn’t fold down to a size that’s backpack-friendly, by any means, but it’s certainly small enough to keep under your bed at night.

The ride is smooth, the brake system is very responsive. There are two ways to brake – one is a gradual slow-down via a thumb pedal not unlike the pedal that makes the scooter accelerate. The other is a heel brake like we’ve got on most scooters. 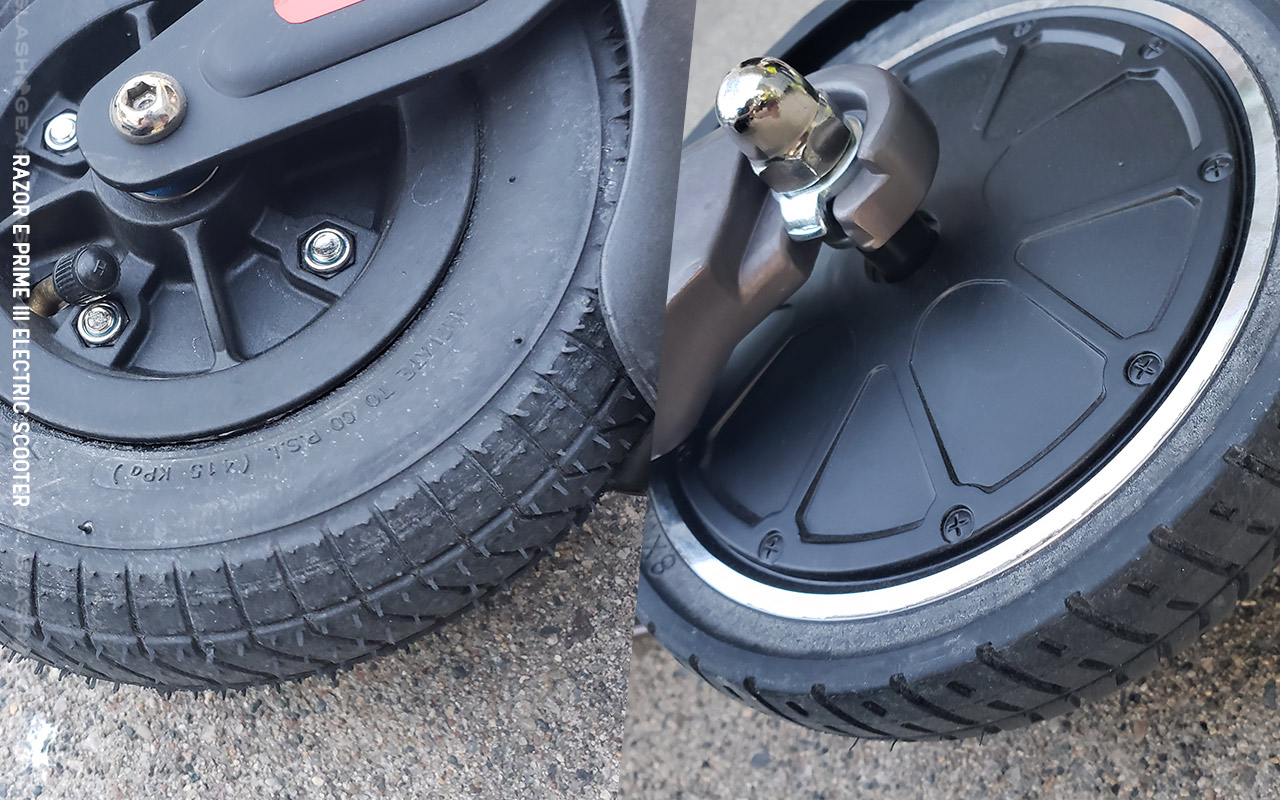 Up front we’ve got a pneumatic tire (with air), while the back rolls with a solid rubber tire. While we wouldn’t like to look forward to having to replace these tires (likely many years down the road), our tests showed that the combination made for a reasonably smooth experience. Granted, we’re not taking this scooter in any massive potholes, but anything under an inch was taken care of handily by the Razor E Prime III’s combination of tires.

To charge this scooter, you’ll have to find the plug under the base, move the cover aside, and plug in. Inside is a 35V 5200mAh lithium-ion battery that’s quoted as lasting up to 15 miles of driving on a single charge. We’ve gotten to a little over 10 in our tests, so far. That’s 10 miles across a city, on sidewalks, and not all flat land. 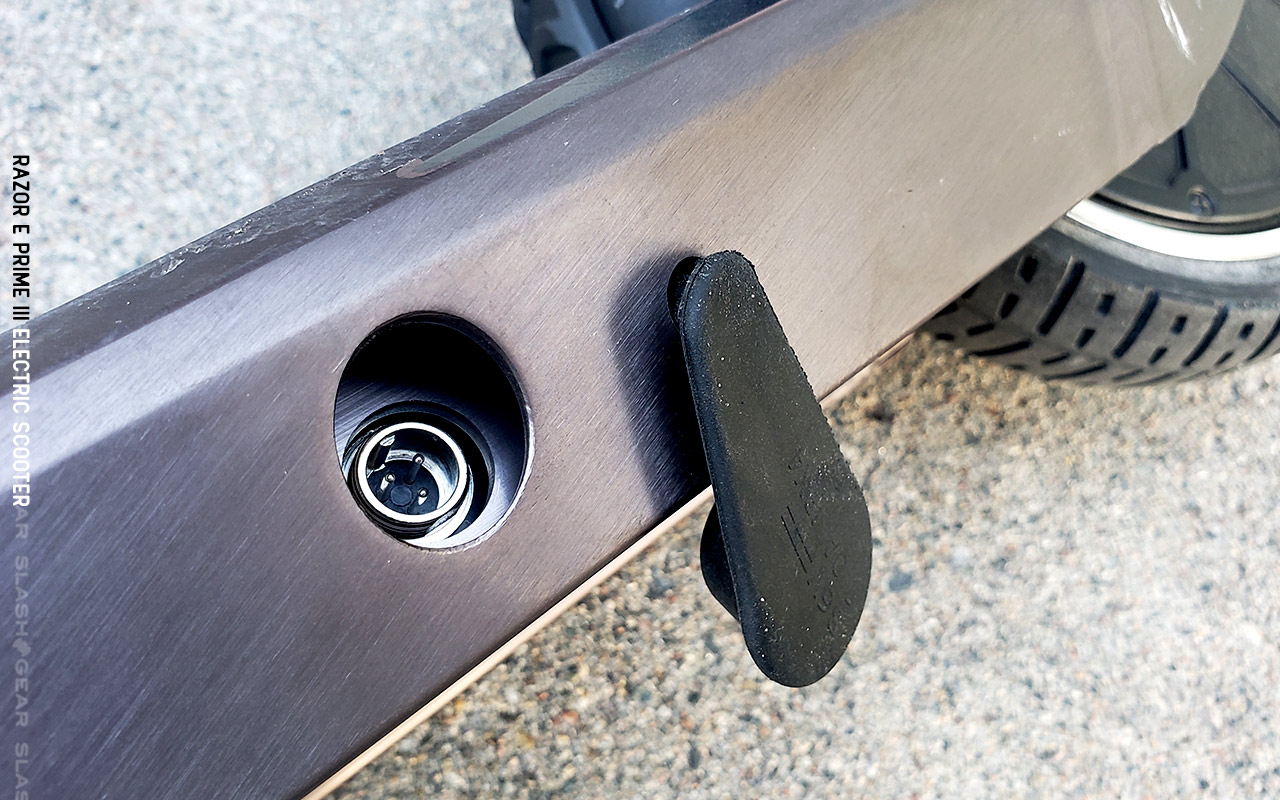 If you’re driving uphill on grass, you’ll be able to run the battery out under an hour. If you’re driving on flat land, you’ll go for around an hour easily, provided you’re not carrying more than the scooter’s recommended weight.

We’ve gotten this machine up to 18mph and faster, far faster than we’ve ever really needed to go on an average day – or between charges. Charging from zero to full is not fast – you’ll be waiting around 6 hours for that whole process. 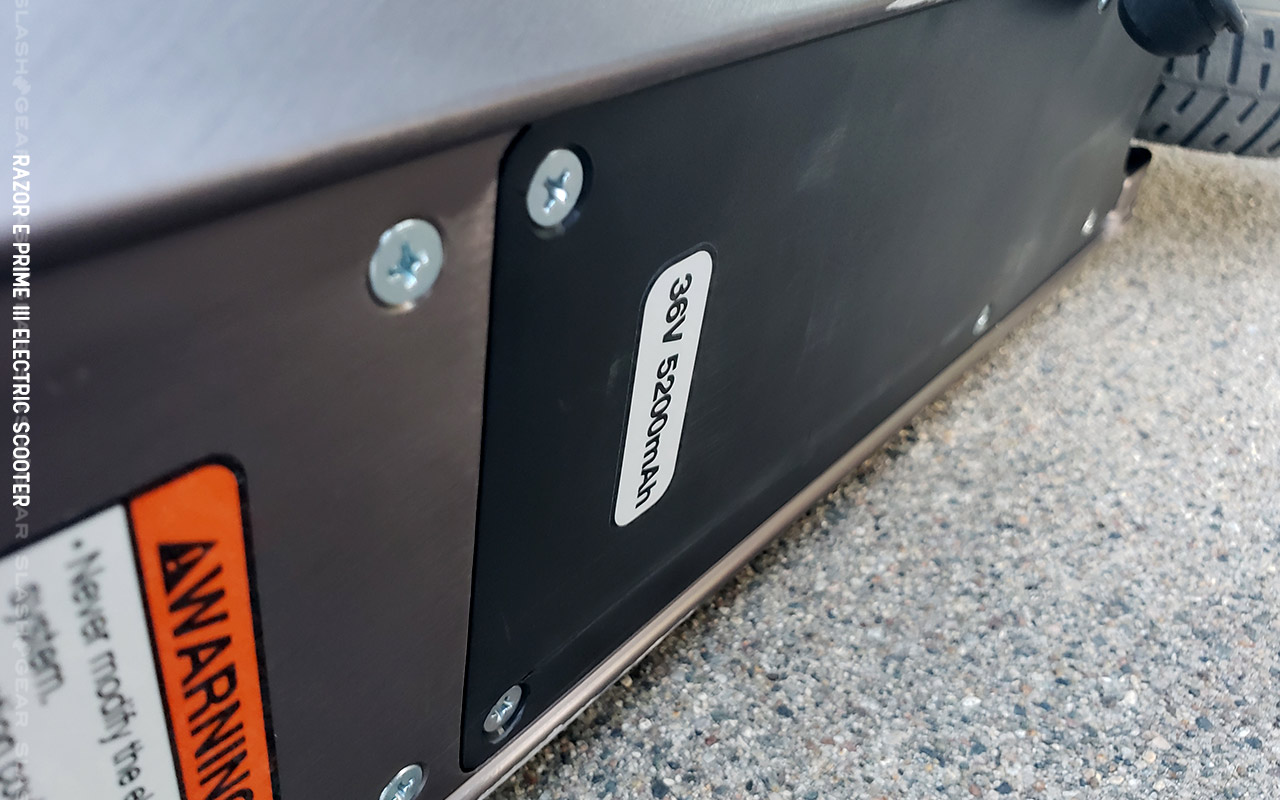 NOTE: As the battery gets close to empty, the maximum speed of the vehicle becomes reduced. This is likely due to power conservation efforts on the part of the scooter – and not particularly noticeable unless you’re planning on running a 15+ mile race with a friend.

Price and wrap-up VS competitors

The price of the Razor E Prime III Electric Scooter seems high because we’re accustomed to the price and availability of the popular kick scooter line from the same brand. But $50 for a kick scooter VS $400 for an electric scooter isn’t a comparison we should really make, unless we’ve not yet decided if electric is the way to go.

The real comparison should be between the various electric scooters we’ve tested over the past few years. There’s a Turboant X7 Pro foldable electric scooter out there that’ll run you $550 right now (with a normal price at $700) – that’s slightly larger and more powerful. 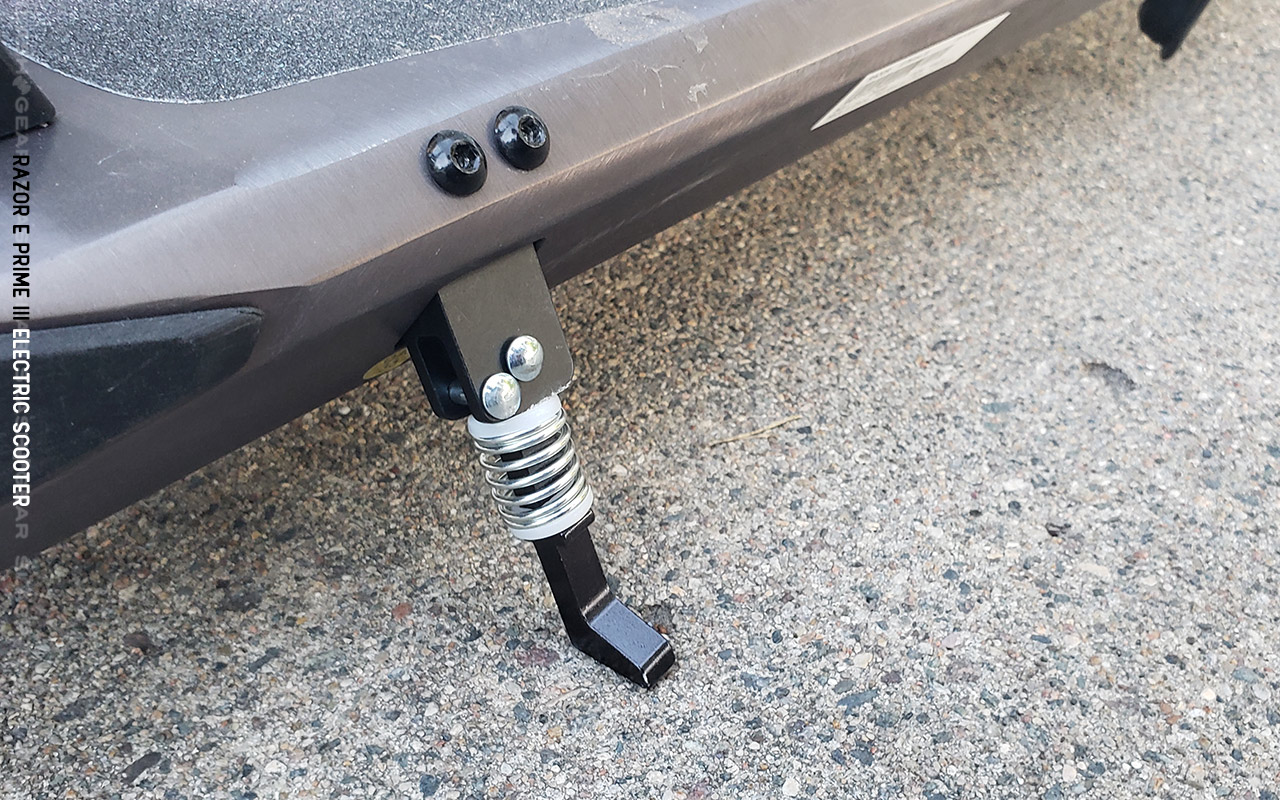 Then there’s the E-TWOW electric scooter that’ll cost you closer to $1000. That one’s about the same size as the Razor E Prime III, and it weighs about the same, too. The biggest sell-point for that scooter, for me, was the KERS tech (kinetic energy recovery system) which allows the user to charge the scooter by lightly pressing down the brake while rolling down a hill – that’s a feature EVERY electric vehicle should have, if you ask me.

The differences between the scooters we’ve tested and the Razor E Prime III are STILL small enough that Razor’s scooter seems like a deal by comparison. If you’re looking for an electric scooter and your price range is within the $400 mark, this is the scooter I’d recommend above the rest right this minute.