Over the past few weeks we’ve been testing out the 33V Booster E-TWOW electric kick scooter. This device isn’t the sort of vehicle you’re going to hear about on the news or see rolling around your neighborhood, more than likely – the company just isn’t that massive – yet. Based on what we’ve experienced with this tiny vehicle, it’s easy to recommend it as one of the most fun-to-use examples of urban transport out on the market today. No gasoline required.

Right out of the box the E-TWOW is ready to roll. It’s powered up and needs only that you unfold it before you take off. This is a folding scooter, after all, and ships in storage mode. The entire scooter weighs in at 10.5Kg (23.15 pounds) – that’s a fairly sweet spot between light-to-carry and heavy enough to support an adult while riding. 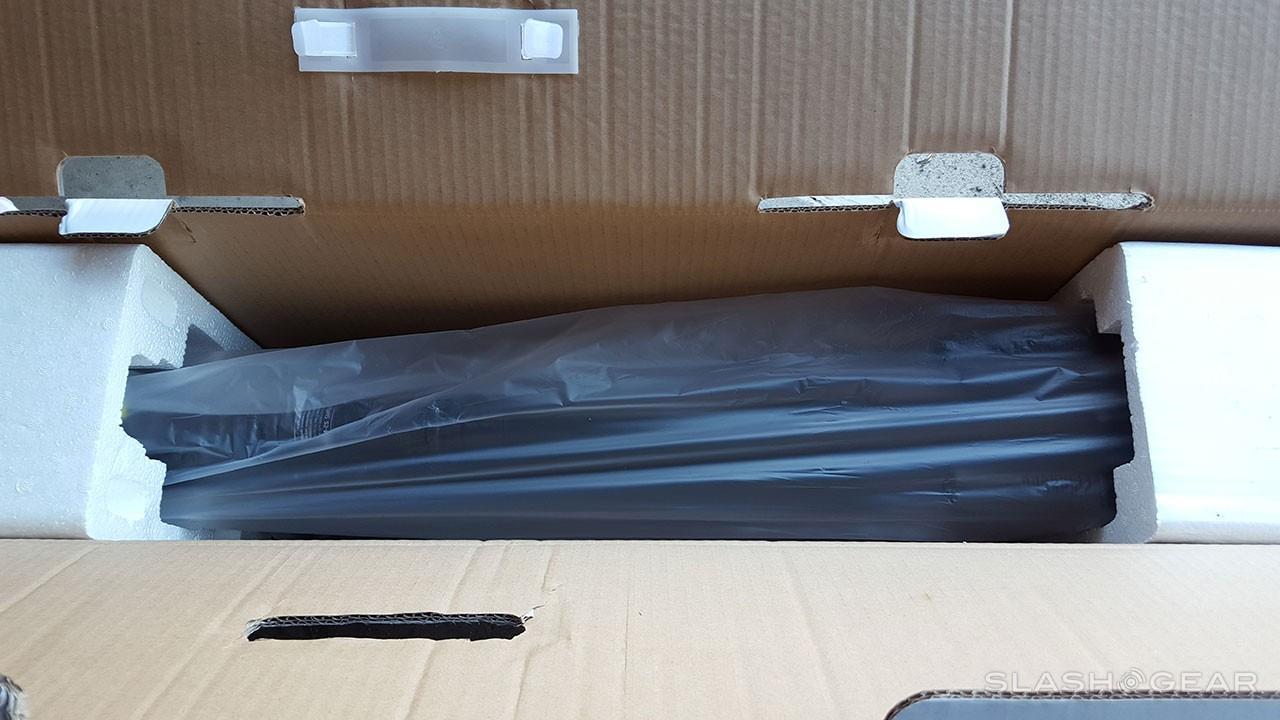 The scooter is folded down in 3 places. It locks at the back wheel, clicks in place at the point at which the handlebars meet the base, and unfolds again at the top, each handlebar pulling out and locking in. Each of these lock points set in hard enough to assure you you’re not going to collapse while riding, but not so hard that you wont be able to fold the scooter down in a hurry, if need be.

The handlebar is adjustable for short and tall users, locking in with a lever at the front of the handlebar holder.

NOTE: the maximum load or rider weight for this vehicle is 110 kg (242.5 lb), and we wouldn’t recommend going any heavier than that. Similarly, we’d recommend against young children using this vehicle, as it is an electric vehicle – please ride extremely responsibly, helmet, pads, and all. 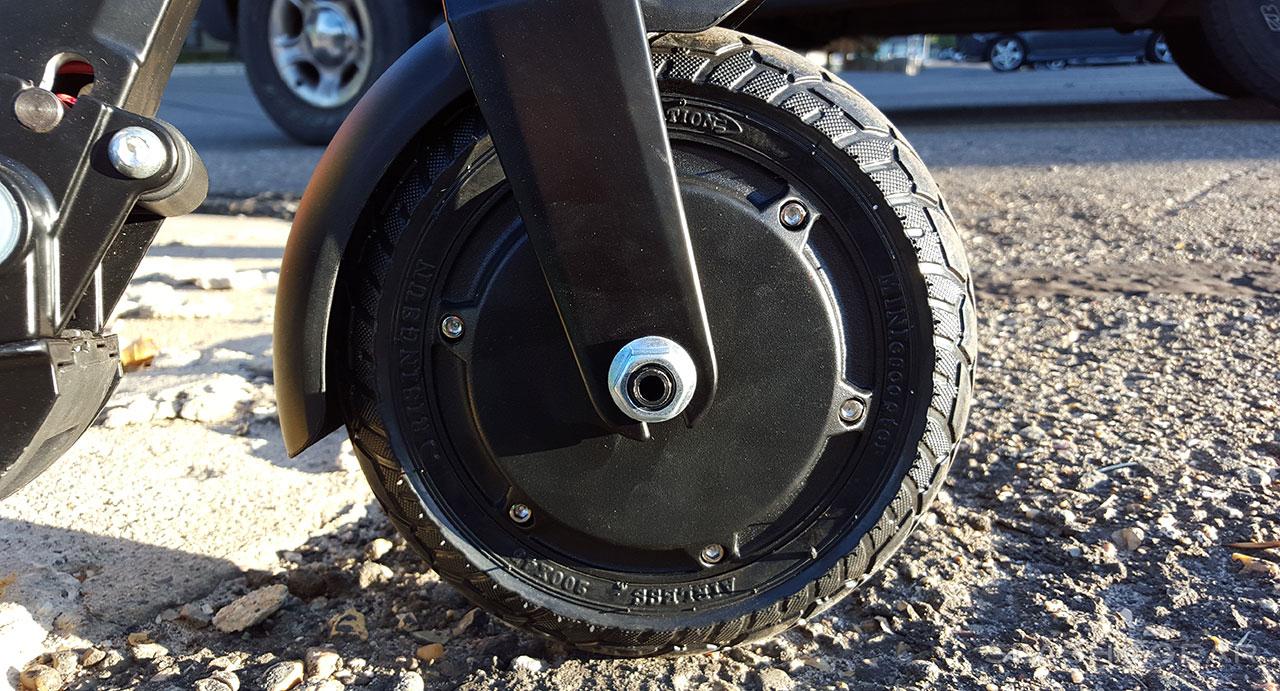 As the vehicle is powered up when you get it – more than likely – you’ll be able to drive immediately. First you’ll press the power button, see the tiny display flicker on, then push off the ground and forward with your foot, balancing on the scooter as you do so.

As you push forward, you’ll want to lightly press down the thumb-pad on the right handle-bar. This pad – also a lever – is your throttle. 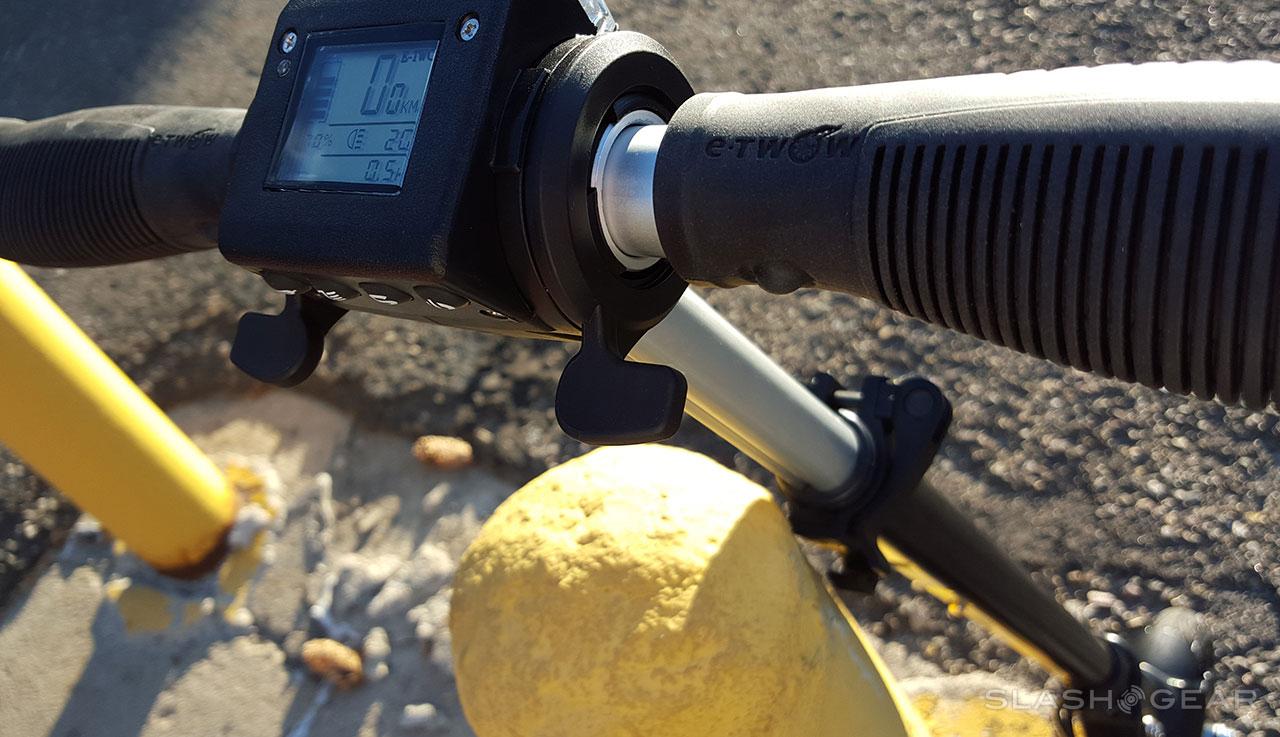 There’s a lever on the left handlebar as well for your left hand’s thumb. This is the electric brake – this brake regenerates power for your scooter. If you happen to live in an area where you have lots of ups and downs – hills, and the like – you could potentially ride on the power you have from your initial charge and regenerated charge from braking for a near-indefinite amount of time. 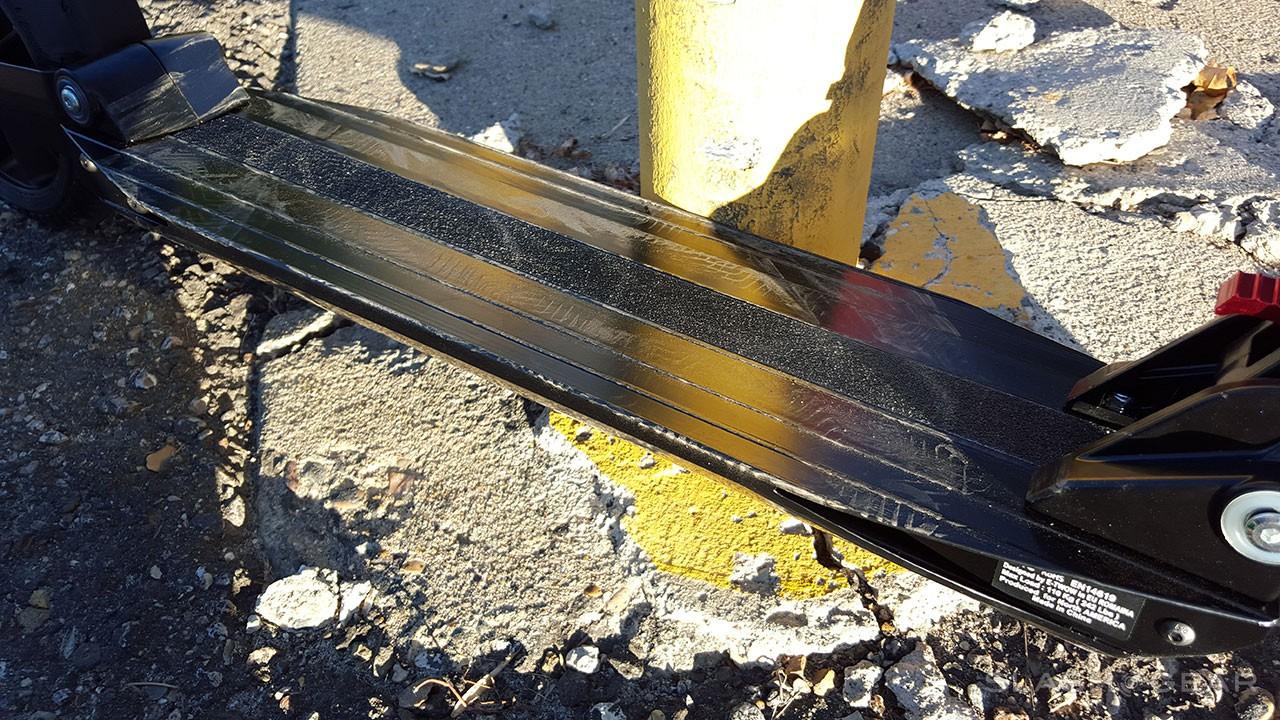 Thus far we’ve not gone much further than about a full charge at a time, coming in at around 13-miles. That includes braking from time to time, this equaling just inside the company’s estimated minimum to maximum range of 10 to 15 miles.

The throttle here is surprisingly forgiving, offering a very easy-to-manage range of speeds, especially with the brake at the left hand. The company suggests we’ll only be able to go 18.5 miles-per-hour (29.77 km/ hour), we’ve already gotten right up to that point on flat land, over a relatively short distance – we’re confident we can go quite a bit faster under the right circumstances. 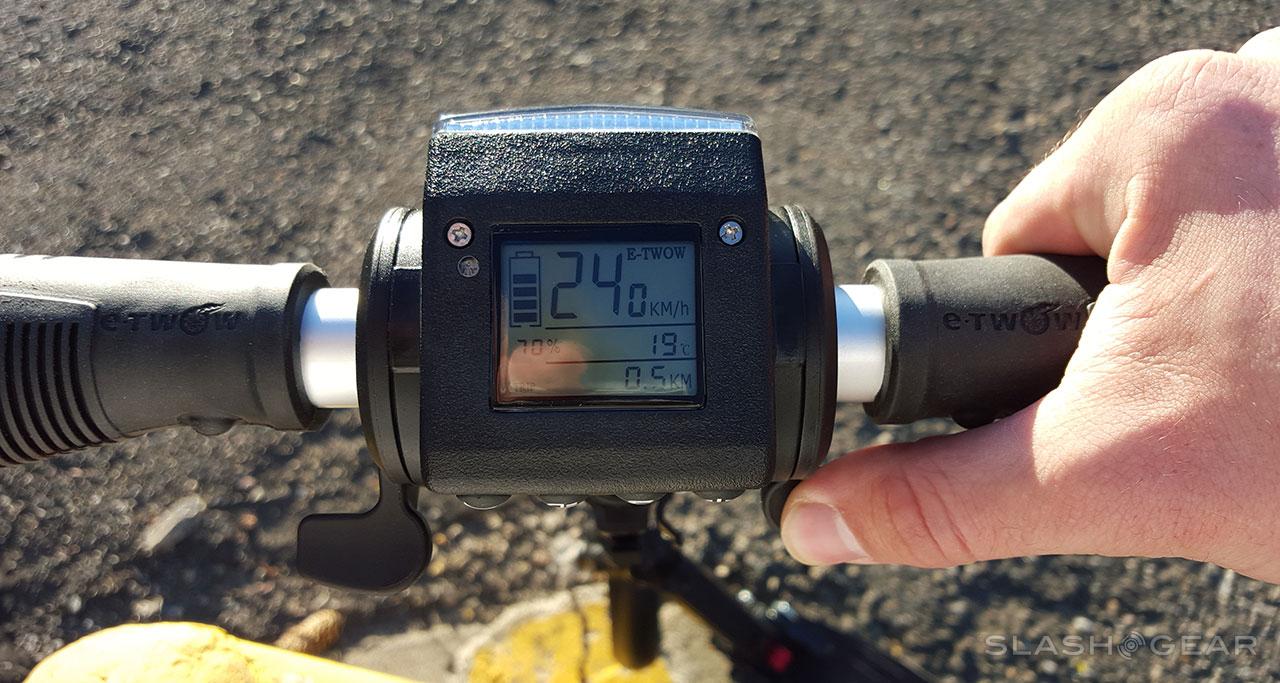 If you maintain the same speed for 5-minutes straight, the scooter switches to cruise control.

Below you’ll see this scooter’s LED light array. While this light IS bright enough to help you see in the dark, we’d recommend only riding during the day. Not because riding this scooter at night isn’t fun, but because it’s pretty gosh-darned dangerous. 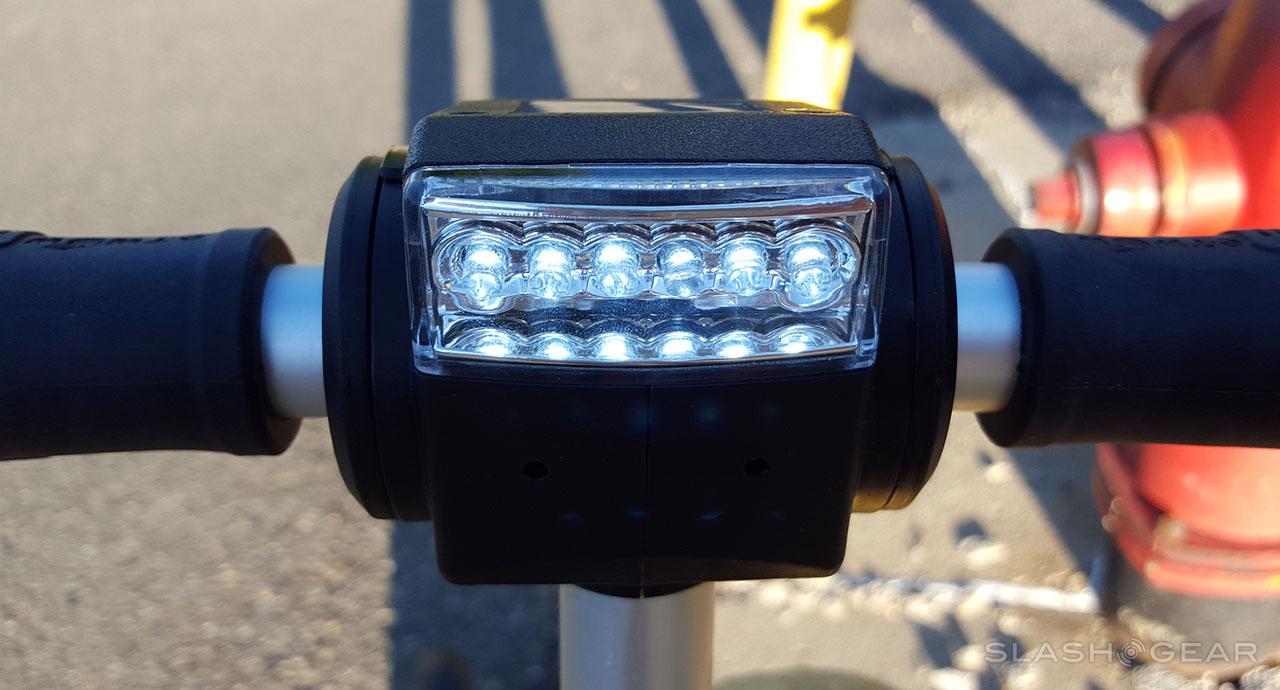 The wheels on this scooter are fantastic. Both work with rubber and plastic and are airless, thick, and puncture-proof. While we’re not sure what we’ll do once we’ve run them both down to bald, for now they grip tight and keep us moving quick. 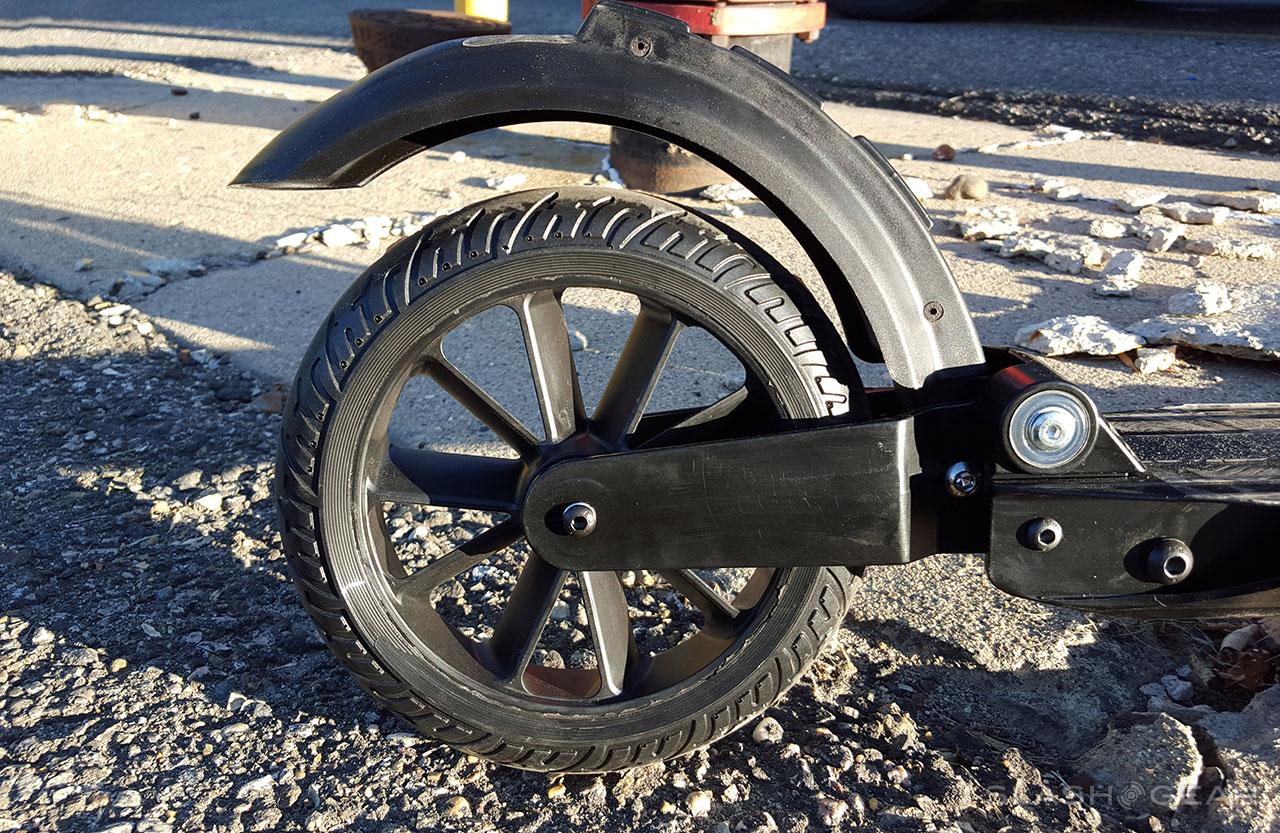 In addition to the electric brake system, this scooter has a rear skid brake. This brake fits around the back wheel and – obviously – makes the whole scooter stop in a hurry. 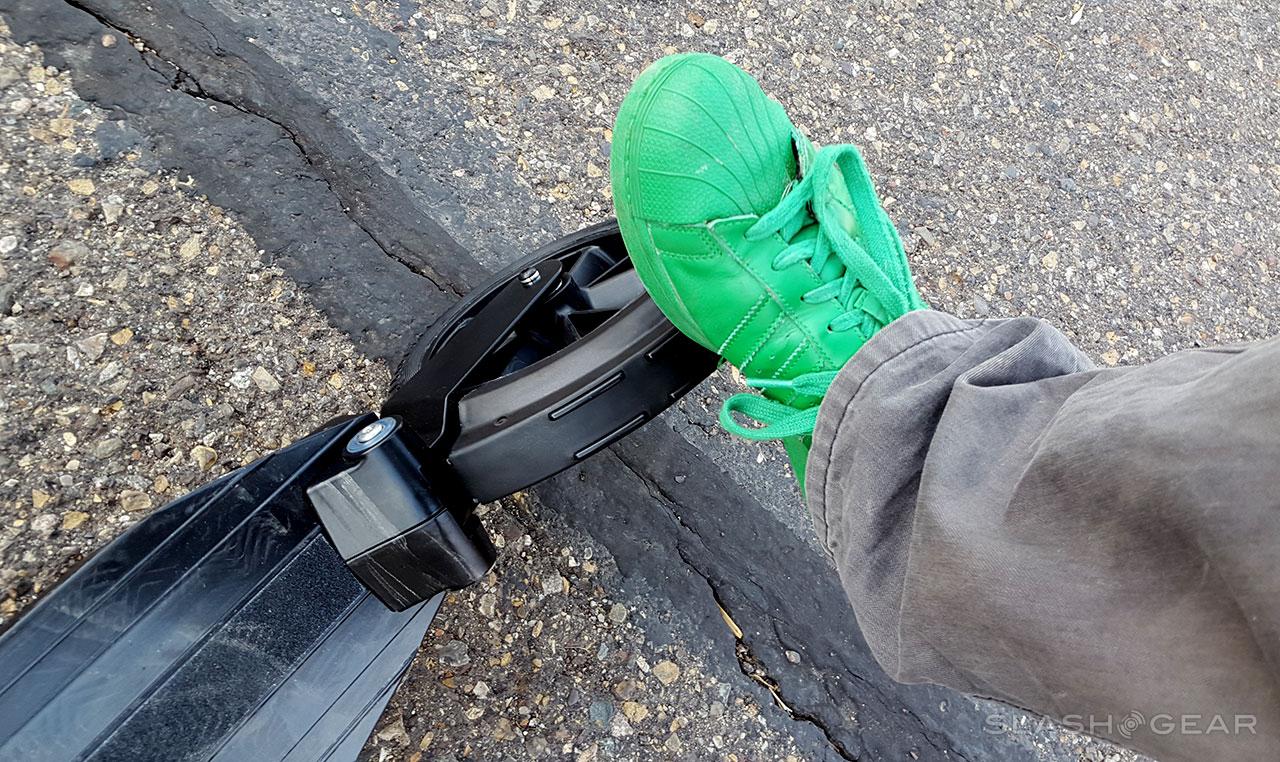 If you’re not all about using the electric power-regenerating brake system, you get a 3.5 Amp “Quick Charger” which takes around 2-hours to bring you from 0% to 100% charged up. 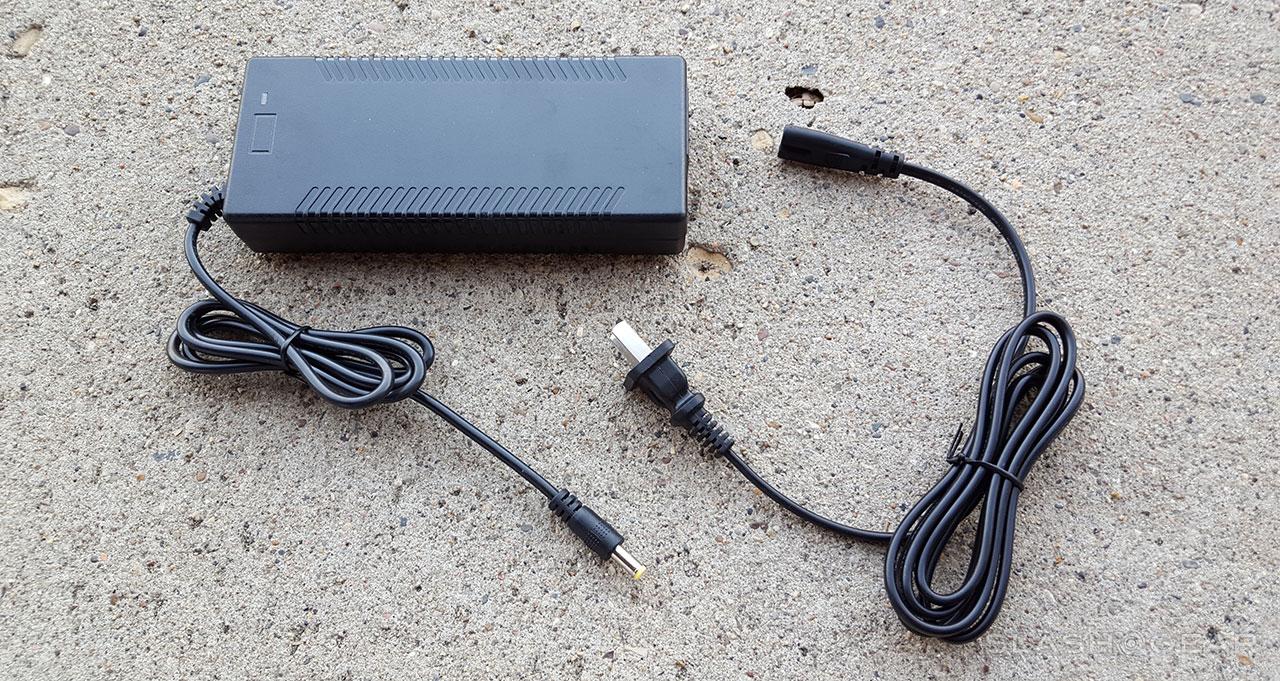 Above you’ll see the included charger. It’s smaller than you’d expect, but certainly not something you’re going to carry around in a purse. Backpacks are more realistic.

This vehicle is available through ETWOW.com online or through a number of E-TWOW authorized dealers throughout the United States. Several dealers can be found in Los Angeles, San Francisco, and New York, while others reside in states like Washington, Ohio, Florida, Michigan, and Minnesota. Check the Local Dealers page at E-TWOW’s website to get in contact. 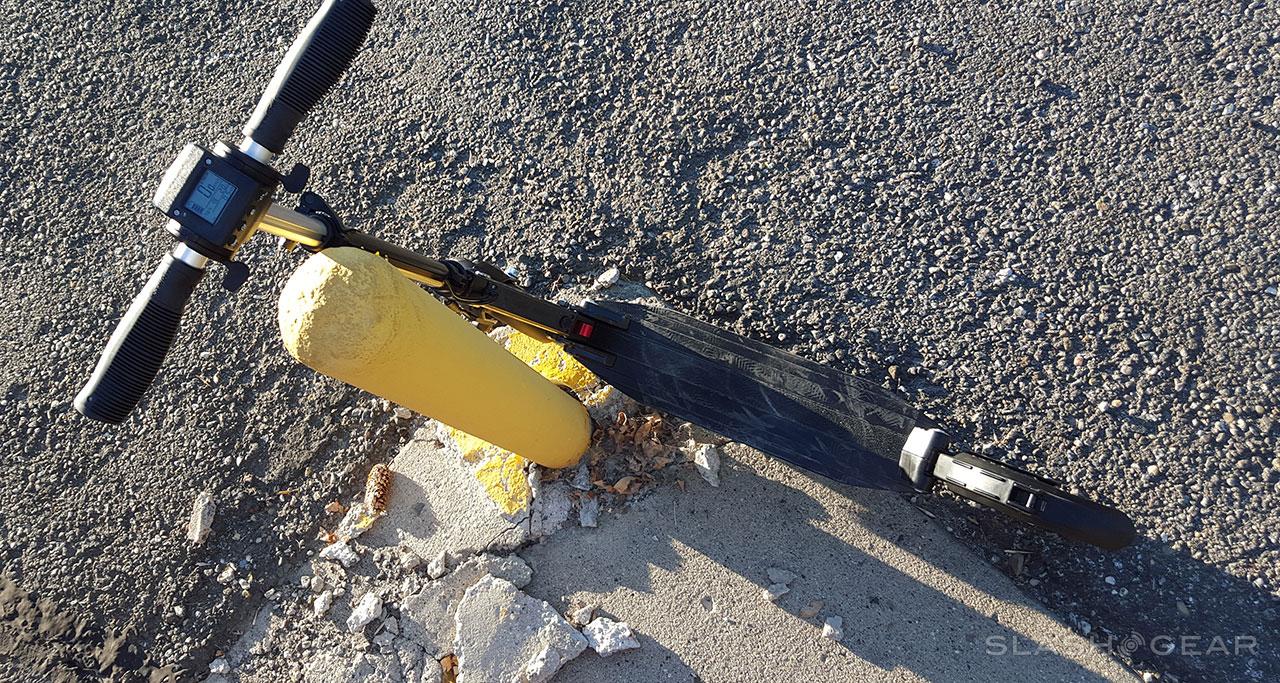 This scooter is going to cost you right around $999 USD, and the box includes the scooter itself (fully assembled), and a charger. That’s all you get, that’s all you need.

Is the scooter worth it? If you’re living in warm climates, don’t like riding a bike, and need to get from place to place over a short distance in a hurry, then certainly.

If you’re looking for a vehicle that’s capable of bringing you back and forth through the snow on your morning commute over 20-30 miles of highway – then no, you’re going to want to stick with a car.

If you’re an electric vehicle enthusiast who likes to generate their own power by hitting high speeds then hitting the brakes – by all means, E-TWOW is the scooter for you.