Quanta has been demonstrating multitouch touch-sensitive displays using an optical recognition system rather than the more common capacitive or resistive panels.  The technology, which the company calls Optical Touch, relies on two cameras embedded into the top left and right corners of the display, which track the user’s fingers.  It will be compatible with the multitouch functionality coming as standard in Windows 7.

Optical Touch is more cost effective for larger displays, as the dual cameras are cheaper to implement than to offer a full traditional touch panel.  The company has apparently applied the system to various notebooks and displays, for both portable and stationary use, and will begin mass production soon.

While confirmed partners are unknown, Quanta has previously been tipped as the manufacturer for ASUS’ 20 and 22-inch Eee Top touchscreen all-in-one PCs.  ASUS CEO Jerry Shen has confirmed that the two devices will launch in the first half of 2009, and be followed by further, similar models.  Shen has also previously revealed that the company will begin to offer Windows 7 in 2009. 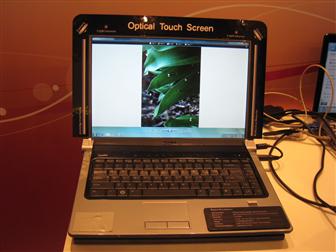