Qualcomm has slimmed down its ultrasound pen, making the sonic stylus potentially fit inside a Galaxy Note 3-scale smartphone for more portable use. The pen, which uses sound tracking to deliver a tablet stylus with better accuracy than the average digitizer, has been trimmed in its latest iteration, now sized to fit inside the silo in a phone rather than in a tablet portfolio.

Qualcomm has been showing off the prototype for some time now, demonstrating the previous pen at CES 2014 in January alongside an early Snapdragon 805 prototype.

Most digital stylus systems use either a touch layer in the display, or a digitizer that interacts with the pen wirelessly. Wacom and N-Trig are the better known suppliers of the latter; Wacom’s tech is inside the Galaxy Note 3, while Microsoft opted for N-Trig with its new Surface Pro 3. 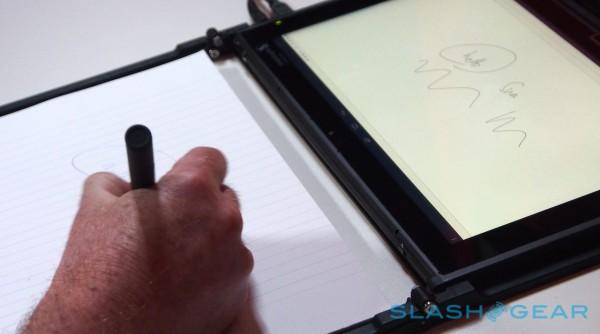 Generally, though, they’re either expensive (in the case of active digitizers) or relatively inaccurate (in the case of capacitive touchscreen pens), something Qualcomm says it has addressed with its stylus.

It relies on ultrasonic emitters just above the nib of the pen itself, and a multi-microphone array built into the tablet or smartphone. By using clever algorithms, the Snapdragon 805 can figure out whereabouts the pen is in relation to the device, including when it’s hovering several inches off the surface of the screen.

Like a Wacom or N-Trig digitizer, it also tracks pressure, recognizing up to 2,048 levels.

While it’s possible to “write” directly onto the Snapdragon 805 Mobile Development Platform Tablet (MDP/T)’s display, Qualcommm’s demo system for the chip, you can also write nearby the display and still have it show up on-screen. For instance, Qualcomm has a NotePad portfolio prototype which puts the tablet next to a regular legal notepad, everything sketched on the paper being replicated digitally.

However, while the initial stylus was scaled much like a fountain pen, Qualcomm has slimmed the technology down to a much smaller model. Capable of fitting into a phablet-scale mockup, the trimmer version works in exactly the same way, but could bring accurate pen abilities to a smaller device. 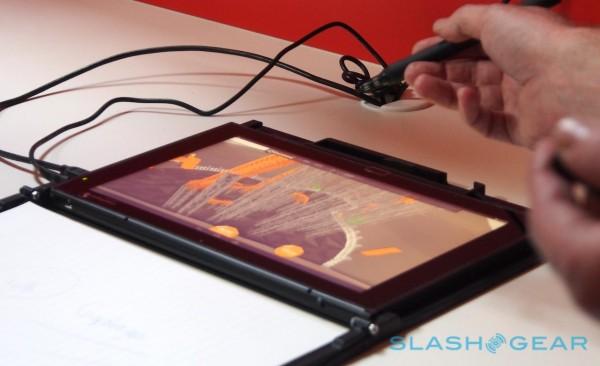 Performance depends on how many microphones there are in the system – the MDP/T has seven, for instance – and the amount of ultrasonic interference around, though Qualcomm has algorithms to address that too.

While digital notetaking is one obvious application, along with art, Qualcomm is also exploring a new generation of 3D interfaces and games for the ultrasound system. Since it can track the pen some distance off the screen, it’s possible to effectively sketch in mid-air: alternatively, you could navigate through a multi-layer UI, or even draw game details – like a virtual rollercoaster track – in the space above the tablet or phone.

It’s an impressive system, and while the stylus fell out of fashion for some time, it’s gradually been finding a following again in more recent years. Qualcomm won’t say if any of its Snapdragon 805 manufacturing partners have also decided to grab the pen tech, but did point out that the cost of integrating the capabilities into the core device itself would be relatively low, only in the region of $1.50.

That could leave the pen itself offered as an aftermarket accessory, giving users the option to skip it if they didn’t need digital note functionality, or indeed upgrade later if they changed their mind. There’s more on the Snapdragon 805 in our preliminary benchmarks. 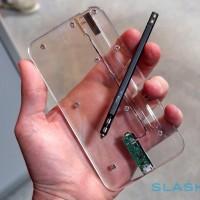 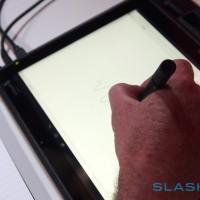 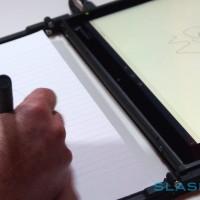 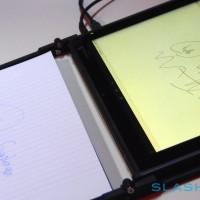 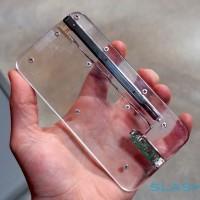 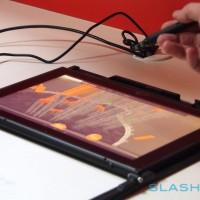 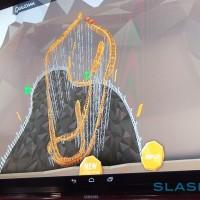