Sony might have just killed off PlayStation Mobile, but it is taking another stab at gaming on Android, this time from a different angle. While its PlayStation4 Remote Play app might officially be limited to its new Xperia Z3 family of devices, one developer has started a port that will make that app compatible with other Xperia devices as well.

One of the most important things, at least for gamers, coming out of Sony’s IFA 2014 announcements is the new Remote Play feature available on the Xperia Z3, Xperia Z3 Compact, and even the Xperia Z3 Tablet Compact. Although limited to the PlayStation 4, it gives owners the ability to continue playing their PS4 games right on their smartphone or tablet wherever their are. A special mount accessory is also available that will connect the smartphone or tablet with a DUALSHOCK 4 controller for maximum benefit. Naturally, the feature is available only on the lattest of Sony’s devices, at least for now.

XDA member “XperiaPlaystation”, is setting the groundwork for making the app compatible other Xperia devices, as long as they are running Android 4.4.4. It also requires a rooted device and that has Clockwork Mod (CWM) recovery installed to flash the necessary ZIP files. It should be clear, however, that this isn’t actually the app itself. It only makes the devices compatible with the PS4 Remote Play app if and when it hits Google Play Store. Xperia Z1 owners might have to do an additional step in case their smartphone still shows up as being incompatible. 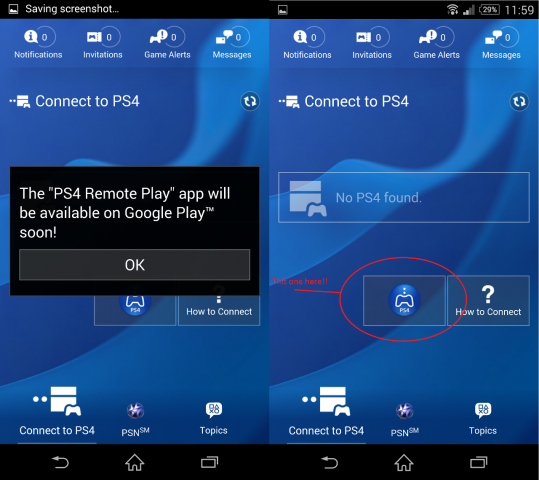 That said, Sony hasn’t revealed yet its plans for the app. The OEM has played nicely with the Android community when it comes to bootloader unlocking, updates, and even making apps available to older devices. So there might be a very slim chance that such workarounds might not even be necessary for more recent models. For other devices, however, this might be the only way they will ever get to enjoy that feature.