Perhaps it was something inevitable but a rather sad note nonetheless. Sony is pulling the plug on the PlayStation Mobile app for Android, which will completely cut off Android users running the latest versions of the mobile platform. This will ostracize even owners of its “PlayStation Certified” Xperia handsets, in favor of focusing more on Sony’s actual gaming handhelds.

PlayStation Mobile is more than just an Android app. It is basically a framework to download and play a select catalog of games, most of them indies, on a number of devices, including PS Vita and selected Xperia smartphones. For Android users, this allowed them to play indie PS titles without having to spend for a handheld. Even as late as December last year, Sony was still actively pushing PSM, expanding its coverage to 8 more countries.

While Sony has recently been praised for its indie-friendly setup, in contrast to Microsoft‘s initial relationship with the indie game dev community, it is only natural to see it batten down the hatches on its core gaming hardware. While it isn’t completely cutting of this indie-oriented publishing framework, it will be driving developers’ and gamers’ attention more towars the PS Vita and its ilk.

That said, Sony isn’t pulling out from Android completely today. The withdrawal of support for PSM will be gradual, depending on the version of Android running on the device. Sony has put up an FAQ with a matrix, translated below, that shows the level of support for different Android versions. In a nutshell, for those still running on Android 4.2, it is business as usual. For 4.3 and 4.4, PSM won’t be supported but access to the game store as well as redownloading purchased games will be supported on a case to case basis. On Android L, however, whether that be 4.5 or 5.0, none of those will work and already installed games might not even run properly. 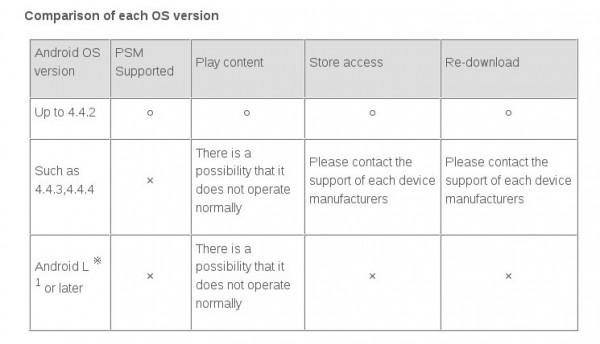