A new connected smart-bike integrating the best of mobile data and supercar-style suspension has been cooked up by Canyon and Deutsche Telekom, expected to show up for road trials early in the new year. Dubbed Project MRSC Connected – after the “Magneto-Rheological Suspension Control” (MRSC) – the bike links a new carbon leaf spring suspension system with a cellularly-enabled brain, as well as a network of sensors throughout the frame.

On the bike side of things, Canyon has developed new MR (magneto-rheological) fluid bearings in the fork leg pivots. When the metal particles suspended in the fluid are subjected to a magnetic field, the viscosity changes; adjusting the degree of magnetism changes them from shock absorbing through to maximum stiffness, depending on riding style.

It’s a similar approach to one we’ve seen on high-end cars, though not usually found on bikes. By relying on the various sensors to figure out what the road conditions are like and how the rider is tackling their route, the MRSC system can handle the adjustments automatically. 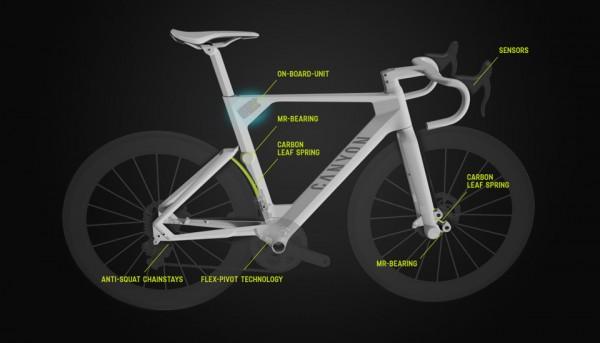 As for the connectivity, the “On-Board Unit” can be utilized in several ways. Day to day maintenance can be signaled when moving or worn-out parts – like brake pads, chains, and gear cables – need replacing, while the integrated GPS could also be used to track training sessions.

Meanwhile, the same technology could allow the bike’s owner to trace it, should it be stolen. Finally, the E-Call system could figure out if the rider has been in an accident, and send out a call to emergency services complete with location of the incident. 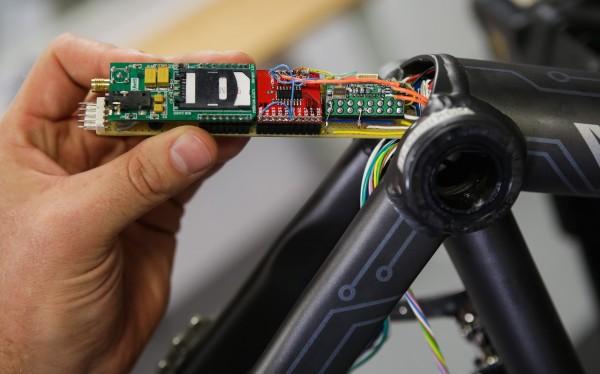 The overall design is a combination of trying to disguise the complexity of the MRSC system and then simultaneously draw attention to it with neon colors. It’s certainly distinctive, but not so much that it would necessarily be an instant theft target.

It’s not the first time we’ve seen biking tech tackled in this manner, however. Last year, startup Wi-MM revealed its take on cloud-connected bicycles, though as an add-on rather than integrating it into the core frame, while a Samsung concept went several steps further earlier this year, using lasers to project a virtual trail on the road ahead, and packing a rear-view video camera.

Canyon and Deutsche Telekom will be kicking off road trials of the smart-bike in early 2015. No word on how much it might cost if it reaches production, however. 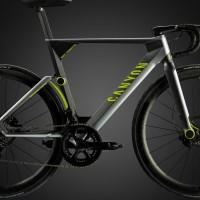 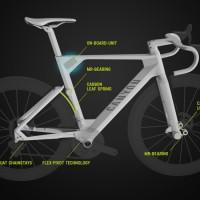 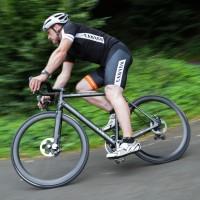 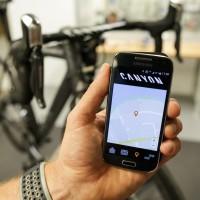 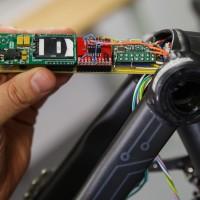