Pebble may have given its smartwatches a price cut as well as far more useful fitness tracking, but the feisty startup also couldn’t quite resist teasing the new Apple Watch, too. In a snarky 8-bit update to the company’s site, Pebble issues a “chill” message to Apple’s Jony Ive, suggesting that the design chief should “breath” because, at the end of the day, “it’s just a watch.”

A second graphic ramps up the banter, playing on the idea of a smartwatch being seen more as jewelry or fashion-wear than something practical.

“Overpriced trophy watch wasn’t on our to-do list,” Pebble says, arguing that its watches are “made by real people, for real people keeping it real.” 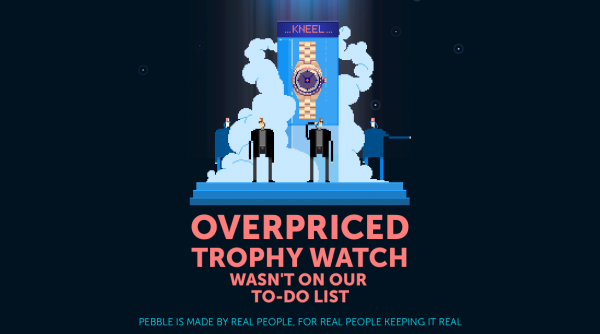 Of course, the criticisms are all tongue-in-cheek – Pebble itself tackled fashion with the Pebble Steel, launched earlier this year, wrapping the same original hardware in a stainless steel casing – and it’s hard to imagine Apple or any of the other wearables firms getting too worked up.

Pebble’s approach has always been one more of simplicity than the broader flexibility of, say, Android Wear or what Apple Watch looks to be developing into, and indeed CEO Eric Migicovsky told us earlier that he saw diminishing returns in making wearables too complex. “Why bother letting that be another stress in your life?” he questioned.

At $99 for the entry-level, plastic-bodied Pebble, it’s certainly a solid deal, though the proof of the pudding will be when watches from Google partners and Apple are on sale, and seeing whether Pebble’s message gets lost in the platform-specific noise.