Throwing a camera is generally a bad idea – lenses tend to be delicate – but Panono positively begs to be tossed. The spherical, lens-studded camera ball slammed through its Indiegogo goal recently, a happy backdrop to its first appearance at CES ahead of its estimated ship date later in the year. We’ve been tracking the project for the past few years, so we stopped by to grab some hands-on time.

It’s fair to say that Panono doesn’t really look like any other camera out there. For the most part it’s a transparent plastic ball, tightly wrapped around a black inner body. A few lime green lines cut around the casing at the join points, but the most noticeable part are the lenses.

Each fixed-focus lens is in front of a 3-megapixel sensor, facing a slightly different angle out of the ball. There are 36 in total, for 108-megapixels of overall resolution, but the important thing is that they give full 360-degree coverage around the ball as a whole.

The idea is simple: throw Panono up in the air, and when it reaches its highest point it fires off all the cameras in unison. The 36 separate images are blended together into one single frame, which can be navigated around either using a photosphere-style viewer, or as a rectangular still. 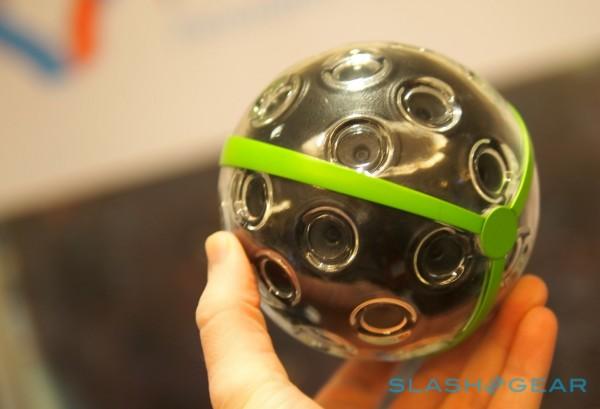 Having held it in our hands, it’s clear that you still need to be a little careful in how you deploy Panono. The camera itself is designed to handle a crash landing, but it’s fairly heavy and made of hard plastic, and so could easily cause an injury if it landed on someone. Some practice ahead of time probably makes sense if you expect to use the camera in a crowded environment.

Still, it’s ridiculously good fun, and there’s something magical about seeing a fully 360 shot created in a single moment. We’ve seen similar offerings from Ricoh’s Theta – though not throwable, and at much lower resolution – and pieced together by services like Microsoft’s Photosynth and Google’s Photo Sphere, but nothing with quite the same sense of drama as Panono.

That flexibility comes at a fair price, however, for what’s effectively a single-purpose camera. Panono is asking $535 for the camera, with first deliveries expected in September this year.