NVIDIA Xavier is an “AI supercomputer” brain for autonomous cars

NVIDIA has rolled out its latest chipset for autonomous cars, an SoC dubbed Xavier that it says will not only make vehicles smarter but satisfy all-important safety regulations. The new system-on-chip is no mere processor, CEO Jen-Hsun Huang argued at Xavier’s launch today, but in fact an “AI supercomputer” that could single-handedly replace NVIDIA’s old system with a fraction of the power requirements.

“This is the greatest SoC endeavor I have ever known,” Huang said at the GPU Technology Conference Europe, “and we have been building chips for a very long time.”

So what’s inside this powerhouse NVIDIA is so excited about? For a start there’s a new, custom octacore CPU architecture, paired with NVIDIA’s new Volta GPU architecture, and – vitally for self-driving vehicles – a new computer vision accelerator. 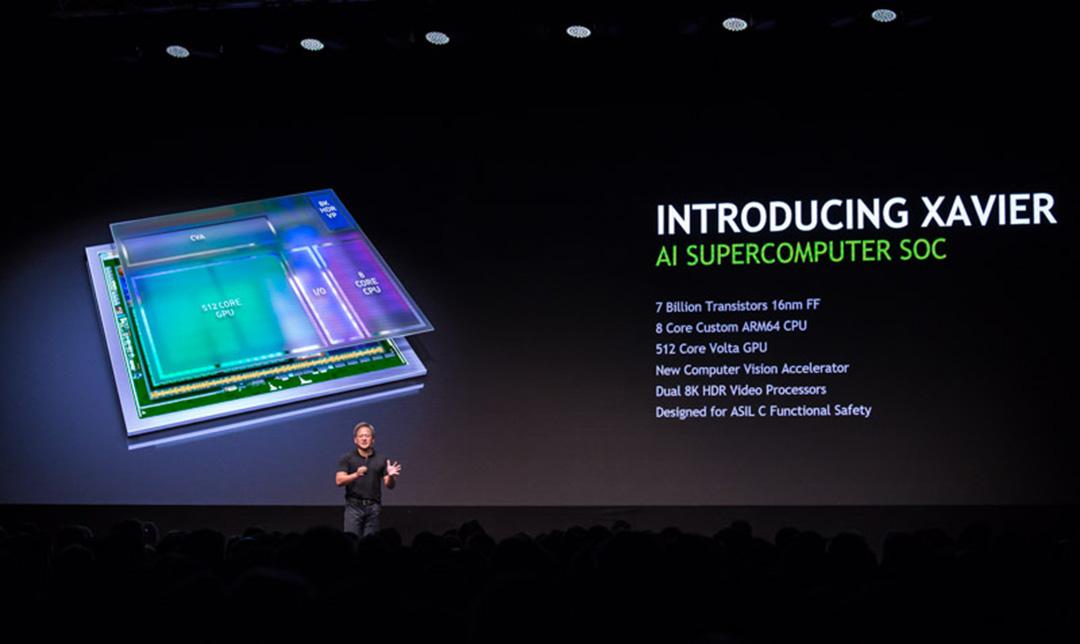 NVIDIA designed it with 16nm FinFET processes, and the result is both performance and frugality. In fact, NVIDIA says, just one Xavier SoC could effectively replace the company’s previous DRIVE PX 2, a dual-SoC board itself only announced at CES in January 2016. That’s despite DRIVE PX 2 having two separate GPUs, among other things.

At the same time, Xavier could manage 20 TOPS (trillion operations per second) of performance even though it only requires 20 watts to run. That’s vital when you consider any power demands of the chipset could take away from power that could be used to drive the car itself.

NVIDIA is no stranger to self-driving car research. The company’s ‘boards have already powered autonomous projects from Audi and others, using a combination of computer vision and high-definition mapping to recognize potential perils in the road and act accordingly.

Back in 2014, for instance, Audi showed off a prototype self-driving car using NVIDIA’s Tegra K1, while in 2015 DARPA developed an autonomous test vehicle using the first-generation DRIVE PX.

It’s not only the ability to replace the driver that NVIDIA is targeting, however. Systems like DRIVE PX 2 can also run infotainment systems and other applications, using multiple virtual machines so that each is kept separate and no cascading crashes could take everything in the car offline.

Volvo announced earlier this year that it would use DRIVE PX 2 in a fleet of 100 modified XC90 SUVs, used for the company’s real-world autonomous trials.

NVIDIA now expects to have Xavier in the hands of automakers, suppliers, startups, and researchers in Q4 2017.