Streaming is becoming the next big thing in the gaming market. Whether it is the streaming of a game on one platform to another or watching a video stream of other people playing a title, the Internet has become an even more important medium of the gaming experience. Riding on this new wave, the latest beta version of NVIDIA‘s GeForce Experience software holds clues to what awaits gamers, especially PC gamers soon, a treat that includes 4K GameStreaming and what else but YouTube Gaming live broadcasts.

Two years ago, NVIDIA launched GeForce Experience in an attempt to streamline the gaming experience for owners of its GeForce graphics cards, especially the high-end ones. It became a one-stop shop for downloading and updating drivers, optimizing PC performance around GPU cards and games, as well as the gateway for many of NVIDIA’s proprietary features.

One of those, for example, is GameStream. Not to be confused with NVIDIA GRID, which is just relaunched as GeForce Now (almost like Sony’s PlayStation Now), NVIDIA GameStream keeps the gaming confined to your local network. To be precise, it allows PC games running on a GeForce-powered PC to be streamed to an NVIDIA Android device, like, say, an NVIDIA SHIELD. With the latest GeForce Experience beta, that streaming can now be done in luscious 4K resolution and in 60 fps speeds, complete with 5.1 surround sound. This exploits the SHIELD’s hardware support for 4K content, a feature that NVIDIA loves to pit against the competition. 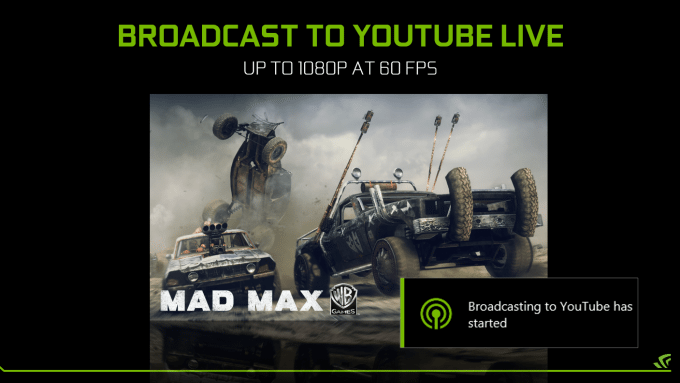 Just yesterday YouTube flipped the switch to enable live game broadcasts of Android games. Not to be outdone on the PC front, NVIDIA is also enabling the feature on PCs. GeForce users can now also try to become YouTube stars, or disasters, by broadcasting their play through using the Share button on the GeForce overlay screen. What’s more, the broadcast can be done in Full HD 1080p resolution 60 fps frame rate. Twitch loyalists need not be jealous, as NVIDIA is also turning on 1080p60 streaming for this older platform.