When Apple revealed the Apple TV, it wasn’t only cable companies that were being put on notice. With a new emphasis on living room gaming, the device is also giving gaming hardware makers something to worry about,. While the big consoles like the PlayStation and the Xbox probably don’t need to sweat even a little, smaller ones, particularly those banking on Android TV, might be feeling the heat. So it’s not surprising that almost immediately, NVIDIA has come out with a blog post saying that its SHIELD Android TV is a better option.

NVIDIA’s beef with Apple TV is, of course, on the gaming aspect, considering that is where NVIDIA’s core advantage lies. In this regard, NVIDIA presents three points why it believes that the SHIELD trumps the Apple TV. One is that it has more kinds of games available, from casual to hard core action. Another is that its GRID service allows players access even to PC games. And finally, it has a real gaming controller, not a remote control repurposed as one. Of the three, perhaps it is only GRID that really holds water, as there are already a number of accessory makers announcing game controllers for the Apple TV. As for the number of games available, NVIDIA does have a few exclusive mobile ports of PC games that you won’t find on iOS, but the selection, especially the quality, between Android and iOS games is still debatable.

But even when it comes to just video, the NVIDIA SHIELD has an advantage. Or rather, the Apple TV has a flaw that some are already starting to point out. Apple’s little box doesn’t support 4K output. For now, that might not be much of a big deal considering how 4K screens and content are not that ubiquitous just yet. In the near future, that situation may change.

NVIDIA’s last point is Chromecast, which is, naturally, an advantage it has considering it is Android based. It does make it easy to throw videos, photos, and music from any mobile device, even an iPhone, to the big screen. But NVIDIA is probably neglecting the fact that most of those who will or want to purchase an Apple TV would already have some other Apple device as well, and AirPlay would make the Chromecast argument moot. Of course, that leaves out non-Apple users in the cold, but that’s nothing new in Apple’s world.

Aside from the 4K issue, there is really not that much to consider when it comes to hardware differences between the two. Apple has been quite popular for being able to squeeze out ever bit of performance from technically lower specs than its rivals. In the end, it will be mostly a question of platform preference, between Android and iOS, and for gamers, the selection of available and upcoming games. 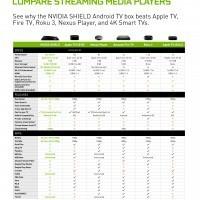