Those interested in the processing power of mobile devices running any and all operating systems should be aware of NVIDIA’s Project Kal-El, a quad core CPU the group is prepping for a late 2011 released. We first learned about this project (and future projects with similar code-names) back at Mobile World Congress 2011 where we also got our first eyes-on look at the processing power it presented via a game called Great Battles: Medieval. It was here that we got our first glance at a quad core processor working on a mobile platform, and as it was said back then, multi-core processing is, and will continue to be, massively important to mobile computing. What NVIDIA provides us today is a stripped-down and simple look at why the next generation, quad core, is much better than dual core in basically every way.

A little bit more information about Kal-El before we continue: first, Qualcomm says “we’re not worried about [it]”, then we hear that the Asus Eee Pad Transformer 2 would be likely for the hero device for Kal-El, the quad core processor rumored to be likely for a 2011 holiday season release. You should know that I and we have declared 2011 to be the year of NVIDIA dominating Android Superphones and tablets, that one of the first Kal-El, and that NVIDIA has promised developer support for the Windows 8 platform for anyone willing to work to optimize their apps and games for the Kal-El quad core environment.

Also, on a separate note, you can get more information on NVIDIA’s GPU roadmap in a post from early August, 2011.

Now today we get to see NVIDIA explaining what it means to have a quad core processor working in the mobile environment. What Project Kal-El was spawned from was the success of the Tegra 2 dual-core platform which, before production, was assumed to be a power-hungry hog for all the benefits is presented. Instead, because less power was needed to power two cores than was needed to power one, (this discussed in the White Paper entitled “Benefit of Multiple CPU cores in Mobile Devices” [.PDF]), NVIDIA went another step down the rabbit hole and brought out 4 cores.

vSMP and an extra, fifth, core

Project Kal-El works with a new Variable Symmetric Multiprocessing technology, also known as vSMP. As NVIDIA notes today for the first time, vSMP includes a fifth CPU core called the “Companion” core that’s built using a “special low power silicon process” which works on tasks at a low frequency – this works well for active standby mode, music playback, and video playback. The other main four cores are made in a more standard silicon process which is able to reach much higher frequencies. Each of these five cores is an identical ARM Cortex A9 CPU that’s individually enabled and disabled based on work load.

Believe it or not, the quad core processor consumes less power and provides higher performance per watt than dual core processors AND single core processors. Because a quad core processor is able to share workload between multiple cores instead of rocking it all out on one, the work gets done faster and the workload doesn’t hit any one core with every bit of a task – this compared to any device with less cores shows the benefit of the multiple cores the same way five guys can make five burgers faster than one guy can make five burgers, and they’re all a lot less greasy than that one guy would have been.

Two modern web browsers at least, Google Chrome and Mozilla Firefox, are optimized for use with multi-core processors. Each tab on Chrome is a separate process and each process manages its own threads. The chat you see below shows CPU percentage used over an amount of time as four different webpages are loaded. Each core takes processes from tabs separately, all four cores working concurrently, getting the job done faster, quite simply, when it comes right down to it. 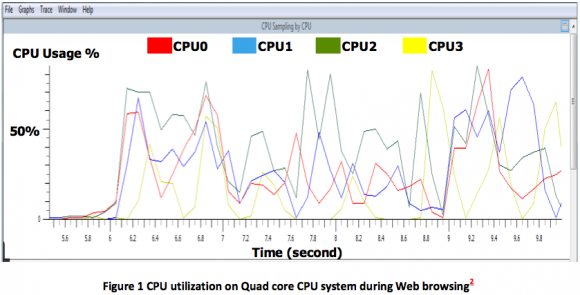 Moonbat Benchmark also shows off the four cores by showing how fast a processor processes Javascript, contending against a dual core processor for kicks. Moonbat here shows an almost 50% increase in performance compared to the provided dual core CPU. 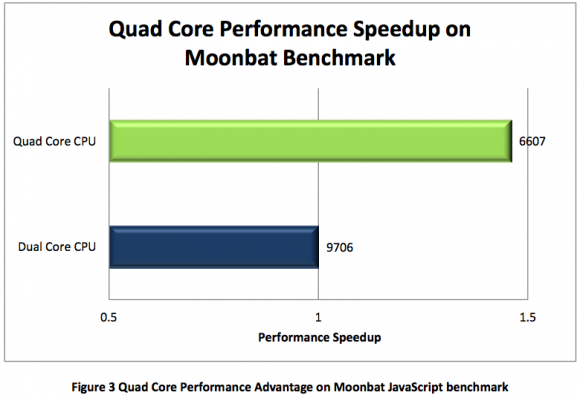 Demanding Applications of the Future

High performance doesn’t let itself shine here in the quad-core world unless it needs to shine. Therefor NVIDIA works with developers to create games that make full use of their ultra-powerful SoCs. NVIDIA has provided here a list of future possibilities for apps that’ll utilize the quad-core landscape:

Next there’s Coremark, a CPU benchmark which shows CPU work across intensive multimedia applications. Here each of several of the top dual-core brands are compared to quad core Kal-El. You’ll find that Kal-El delivers almost two times the performance of dual core processors, this happening across the board (with Texas Instruments’ OMAP 4 coming in second, if you’d like to know, but not by a long shot.) 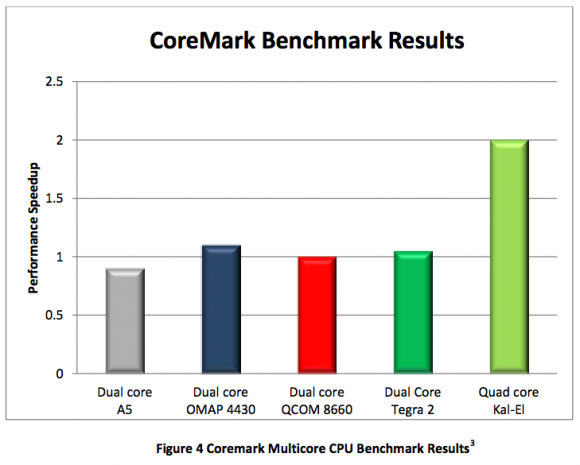 Linpack is another benchmark the folks at NVIDIA run, here showing the difference between, interestingly enough, a dual core Project Kal-El processor and a full quad core processor (with, again, all four cores turned on instead of just the two.) You’ll find that the quad core processor wins by another long-shot.

Most of the best game engines out there, Unreal 3.0, Id Tech 5 and Frostbite, are already multi-threaded and made for multi-core processors. Game engines are currently trending toward task-processing models with the sizes of individual jobs being reduced while number of threads is increased. Real-Time Physics and Rual-Time Texture Generation are but two tools used by the quad core platform to out-perform all competition.

With the power of four cores behind a user, they may turn to apps that create the environment in which they live AS they go about living. What I mean by this is, basically, if you’re playing Glowball, the textures, reactions to events, and physics change as you advance through the game, processed in real-time. Gaming performance speedup shown between the dual core Tegra 2 and the quad core Project Kal-El is plain to see on several different quad core utilizing games. 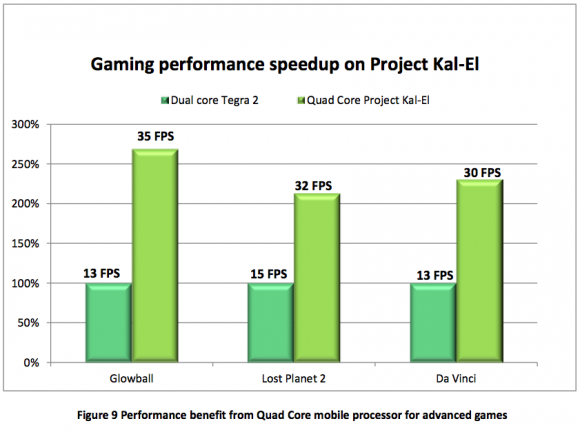 The game you want to play closest attention to here is Glowball as NVIDIA has already provided us with a look at the game which is yet unreleased and has shown us what quad core is truly and impressively capable of. Real time created environment created by you as you advance through it. Almost like you are processor god! The same goes for real time physics processed on the fly – if you don’t need it to start the game up right after you download it, you don’t need to include it.

Glowball is a game that for now just acts as a reference point for Kal-El. In the future it will be released as a full game for the masses. 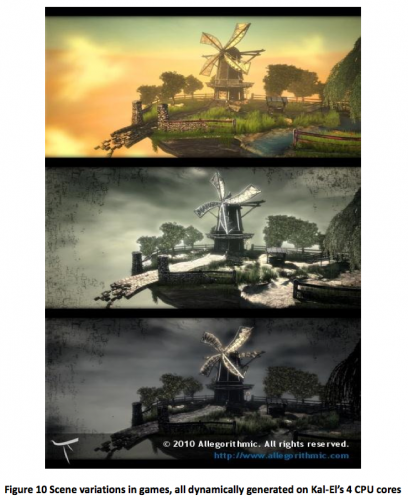 One example of not needing all the information loaded by your game each time it loads is this: while the Windmill game (pictured above) generates texturess and racks up a 300 MB data limit, all of this using only a 900 KB base texture set. This means that a game capable of delivering 300 MB of graphics can also have those graphics, as they’re generated, with only 1 MB to start when you pick the device up from the store. What store would that be? We’ll see soon enough!

You can look into more information about Kal-El by hitting our big portal button or you can hit up NVIDIA’s lovely collection of Whitepapers where all your questions will be answered. You can check out the NVIDIA blog for more information as well.