Notre Dame Cathedral fire: This 3D scan dot may save all

Today we’re having a peek at a full 3D-scan of the Notre Dame Cathedral interior as captured by Professor Andrew Tallon. If what we were doing back when we were looking at 3D ball cameras in 2016 seemed like nonsense – but who’s laughing now, Janice? There’s also a certain video game by the name of Assassin’s Creed Unity that stands to take part in the cathedral’s restoration – it’s big!

What we’ve been doing reviewing spherical cameras (capturing enough photos from all angles to create a spherical-coverage final image) isn’t the same as a 3D scan. What Professor Tallon did was capture the entirety of Notre Dame Cathedral with a sophisticated laser-firing machine with camera action – one that created 3D files that could be viewed in many next-level ways. 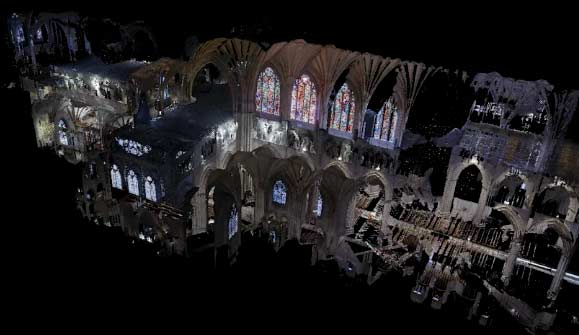 Technically, with what Tallon collected, he could 3D-print the entirety of the cathedral, piece by piece. It’s almost a given that Tallon’s work will be vital to reconstructing the parts of the cathedral that burned down earlier this week.

The dot you see in the first image in this article appears when you look down in any spherical image produced by Tallon – it blots out the 3D scanner that’s scanned the whole building. This dot (this camera) may well be the savior of this historical site.

UPDATE: The device he used was a Leica ScanStation C10. Tallon also worked with the assistance of Columbia’s Paul Blaer.

If you’d like to see Houston’s Johnson Space Center (NASA) in this sort of 3D-vision, head over to our original mega-feature: You’re going to Mars, I went to NASA. Drop in on one perspective from inside Notre Dame to see how extensive Tallon’s scans went.

You might also want to take a peek at the game Assassin’s Creed Unity. Set during the French Revolution, this game allows the user to explore the interior and exterior of Notre Dame Cathedral in shocking detail. It won’t be as useful to the repairers of the building as Tallon’s scans, but for you and I, it’s a perfect way to see what it was like inside before the fire.

Above you’ll see an exploration of Notre Dame Cathedral in Assassin’s Creed Unity by gamer DKCGamerGirl. This was recorded back in November of 2014.