This week The Guardian is tipping the world from one of their anonymous sources that Nokia may well be bringing their full-on Nokia 808 PureView 41 megapixel sensor to a set of standard smartphones in 2013. This tip comes from “sources close to the Finnish handset maker” and is indeed appearing to us to be just about as incredible as it may seem to you. What we’ll likely see instead is a continuation of the Nokia Lumia 920’s high-powered camera technology rather than the beast that is the lens configuration on the 808 – let’s have a chat about why.

The Nokia 808 PureView is a smartphone that’s meant to be used primarily as a camera. It’s got a massive lens configuration on its back that Nokia never intended to compete with the thin and light frames of the high-end smartphones we’re seeing throughout the industry today. Instead it was (and is) meant to show the world that Nokia can, indeed, deliver this camera power in a real market-ready handset.

What we’ve got with the Nokia Lumia 920 is a device that takes on the same “feel” for the brand that Nokia is pushing with “PureView”, this time in a more realistic package for the mass market. This device is not the thinnest smartphone in the world – not by a long shot – but it’s certainly ready to compete against the average top-tier smartphone in its overall package delivery. Nokia is banking on the idea that the camera brand PureView technology will push the rest of their handsets into the limelight.

SIDE NOTE: There’s also the possibility here that the Nokia EOS Windows Phone spoken about recently could be connected to a real-deal high-powered PureView sensor. Think about it! 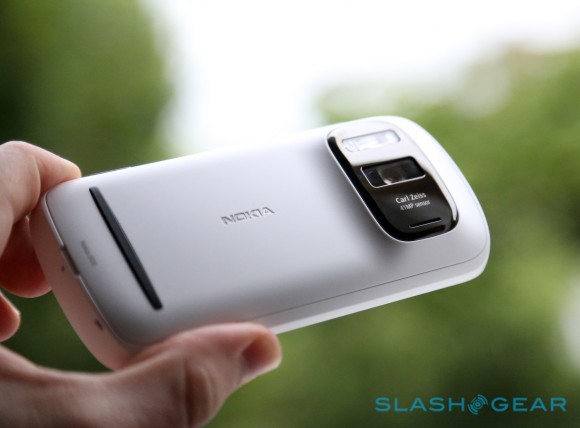 With the tip you’re seeing here about the 41-megapixel sensor coming to the standard handset, it’s much more likely that a game of “telephone” is going on. That means that the original message was likely something more like “Nokia will bring on more high-powered PureView smartphones in 2013”, translated several times to come out to “Nokia PureView smartphones (started with the 808) will come to market in 2013.” The realistic way of looking at this situation is as follows:

Nokia will continue to push forth with PureView brand camera technology in the handsets they deliver that, first and foremost, deliver an overall solid experience in and of themselves. Another possibility is that Nokia is evolving as quickly as HTC and will deliver something wild like multiple layers of lenses sandwiched together to create a camera that, in the end, works with enough sensors that they’d have otherwise created a 41-megapixel photo.

Perhaps four layers of 10 megapixel sensors to create one beast of a photo? We shall see!