Nintendo CEO: Xbox SmartGlass is no Wii U threat

Nintendo has dismissed concerns that Microsoft’s new Xbox SmartGlass could bury the Wii U, pointing out that gamers’ phones and tablets aren’t equipped with play-specific controls. Asked by analysts at E3 2012 whether he was worried by SmartGlass – which will turn mobile devices plus Windows 8 PCs and tablets into second-screens for the Xbox 360 – Nintendo president Satoru Iwata pointed out that the fact that gamers only have two hands mean non-specific hardware could never legitimately rival the Wii U Gamepad tablet.

Iwata’s argument is that touchscreen-centric smartphones and tablets rely pretty much solely on the finger-friendly display itself, whereas the Wii U Gamepad has a touchscreen as just one element of its control options:

“The question is, is what they’re offering truly capable of doing everything that we’re offering? From what we have seen so far, it looks to us as if what they are able to offer really is only a small facet of what the Wii U is capable of. We know that the core users who love playing video games like controllers that you hold with two hands. But what you don’t have on smartphones and tablets are the buttons and the control sticks that they prefer to use.

Now, if they could hold a controller with two hands and hold a tablet or a smartphone with another hand, there would be no issue. Unfortunately, since it is not possible for humans to do that, you can’t play a game in a way you can play with the Wii U” Satoru Iwata, President and CEO, Nintendo

Nintendo has jam-packed the Gamepad with physical controls along with the display: there are two analog sticks, redesigned in the 2012 iteration of the hardware, along with a D-pad, four shoulder buttons, and A/B/X/Y buttons. That’s not to mention NFC.

Meanwhile, Iwata also points out that Nintendo has worked hard on minimizing wireless latency between the Wii U console and the Gamepad, and questions whether Xbox SmartGlass can deliver the same. “If you have latency within [the rendering system], or lag within that process, it’s no longer a quality game” he argues. “So clearly and naturally the latency for a situation like that is going to be very different from a device that has specifically been designed to achieve that type of seamless interaction versus a device that simply has conventional technology layered for each device to be purchased for individual reason.” 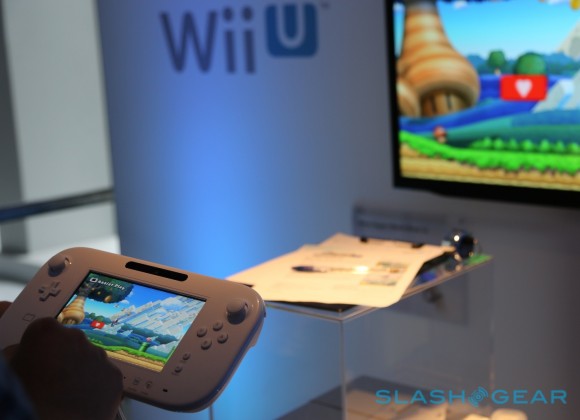 As for whether SmartGlass is a compliment or a threat, Iwata prefers to be upbeat. “The fact that we have so quickly seen somebody following in the footsteps of what we first introduced with the Wii U, suggests that there are people who see great appeal in what we’re offering” he suggests. “I think that’s proof of that.”

There’s more on the Nintendo Wii U in our hands-on with the latest games and hardware.

2 Responses to Nintendo CEO: Xbox SmartGlass is no Wii U threat