It’s time for the “greatest shoe never made” to make its real life debut, and with the fact that they’re being touted as precise replicas, down to “the contours of the upper, the glowing LED panel and the electroluminescent NIKE in the strap.” This should all bode well for the method in which the shoes will be released, that being 1500 limited-edition pairs of the 2011 NIKE MAG, all of them auctioned off in the very near future on eBay with all net proceeds to go directly to The Michael J. Fox Foundation for a future without Parkinson’s disease.

There will be ten days of auctions, each of the days containing one hundred and fifty pairs of the greatest pair of shoes in history (future history). The 2011 NIKE MAG shoes will be listed up on eBay’s Fashion Vault and the entire massive ball of fire that is the auction set starts on September 8, 8:30PM PST and will all end on September 18. To make this pot even sweeter, a previous 50 million dollar match given to the Michael J. Fox Foundation will be, as NIKE says, “effectively doubling the contributions from the auction.” [UPDATE: this cash is from Google!**] Seem like a sweet enough deal for one of the sweetest sneaker releases in the history of the future? Back to the Future, that is!

As NIKE says, the following is a set of factoids about the 2011 NIKE MAG:

The original NIKE MAG was worn by the Back to the Future character Marty McFly, played by Michael J. Fox, in the year 2015. It came alive, lit up and formed to Marty’s foot. The 2011 NIKE MAG shoe was designed to be a precise replica of the original from Back to the Future II. The aesthetic is an exact match, down to the contours of the upper, the glowing LED panel and the electroluminescent NIKE in the strap. The 2011 NIKE MAG illuminates with the pinch of the “ear” of the high top, glowing for five hours per charge.

Check out the shoes in the high-res photos above and below, check out the ultra-amazing reveal video below, and if you’re a really nice reader and want to make your humble narrator do a somersault of joy, go ahead and buy a few pairs and send em Minnesota way.

This of course all comes after what can only be described as the greatest product event teaser invite of all time as we posted early this morning, details from which can also be found below:

Welcome Back to the Future, where the most widely anticipated pair of sneakers ever conceived have been all but confirmed by NIKE as being about to come into existence – IT’S ABOUT TIME. In a teaser handed out to select sneaker-heavy publishing groups, a midnight call from NIKE quickly turned into a room with only a black box with the swoop logo on it, an iPod Shuffle, and a card which read “Play Me.” Once Dr. Emmett Brown was heard saying “Welcome to Los Angeles. If my calculations are correct, over the next 24 hours you are about to see some SERIOUS SH*T!”, the publisher’s next move was to open the box and find a pair of the Doc’s classic 2015 shades and a message that invited them to an event that promised nothing less than the sneakers themselves!

Check out this tiny gallery of the physical bits as spoken about in the paragraph above, then head even lower in this post to see the epic first official teaser as presented by NIKE in secret also inside the past 24 hours of total salivation in anticipation.

Then, because we love you, it’s time of course to get another glimpse of the very first time we laid eyes upon these epic, epic shoes, courtesy of Dr. Emmett Brown, Marty McFly, and the folks of the 2015 future world of Back to the Future II:

UPDATE: a bit more information and some photographs from HighSnobiety as they’re at the official NIKE release event with a real live pair of the shoes: the foam support in the ankle and toe box are amongst the only modifications made compared to the original form of the Back to the Future screen-ready shoe, both of these increased for comfort and actual real-world wearability. These sneakers represent the first “rechargeable” footwear ever offered by NIKE, each of the shoes able to hold a five hour charge for the MAG illumination (again, activated by a pinch of the “ear” of the sneaker).

One of perhaps the most important things to note here is the fact that these sneakers do note “self-lace” as the patent from 2010 made by NIKE would suggest. Another point to make is that this release isn’t quite pinpointed to 2015, the year when the sneakers “first appeared” in the Back to the Future film series. Does this mean that this is only the first wave of these shoes? We’ve got a few more years to wait and see!

UPDATE 2: First, have a look at a segment released today by EA Sports called “Two Steps from Greatness” about Tinker Hatfield. For those of you unaware of the greatness that is NIKE VP Tinker Haven Hatfield, he’s the designer of a few shoes you may have heard of including Air Jordans 3,4,5,6,7,8,9,10,11,12,13,14,15,16, and 20, and of course, the original NIKE MAG sneakers for the Back to the Future II film and now the re-imagining of said shoe for this 2011 release. Check out the segment where he speaks about the 2011 NIKE MAG here:

Furthermore, you can expect to see these sneakers again tonight courtesy of their original 2015 model Marty McFly – I mean Michael J. Fox as he heads to the Late Show with David Letterman – presumably about the shoe release, how it ties in with the Michael J. Fox Foundation, and possibly about the video game “Back to the Future: The Game – Episode 5, Outatime” – you never know! 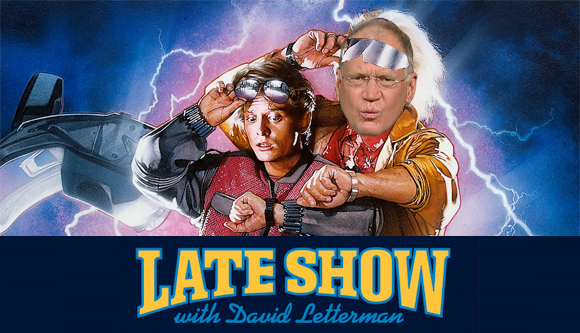 **UPDATE 3: The $50 million donation matching spoken about above will be done by Google founder Sergey Brin and his wife Anne Wojcicki and that’s, again, up to $50 million through the end of 2012. This project has been commented on by Michael J. Fox himself:

“The project is exciting to me because it brings together three very passionate audiences: the Parkinson’s community, sneakerheads and `Back to the Future’ fans. With their support we can accelerate our objective of finding a cure for Parkinson’s.” – MJ Fox

There’s a video scene out there promoting the shoes, (that we’ll be finding soon, I’m sure), made to replicate the original film series that’ll be called a “lost scene” and will star Christopher Lloyd (the Doc) and Donald Fullilove (Mayor Goldie Wilson), as well as basketball star Kevin Durant and the greatest sneaker designer of all time, Tinker Hatfield. Can’t wait!

UPDATE 4: This’ll likely be the last update, I swear! There has indeed been a video drop of the “lost scene” from Back to the Future as well as an appearance by Michael J. Fox on Letterman. Fox didn’t really drop any brand new information on the project other than praise for both the Sneakerheads and the Back to the Future fans who he said were “out of their minds, but in a good way”, letting the audience know that the sneakers were available starting tonight (that being last night, of course.) 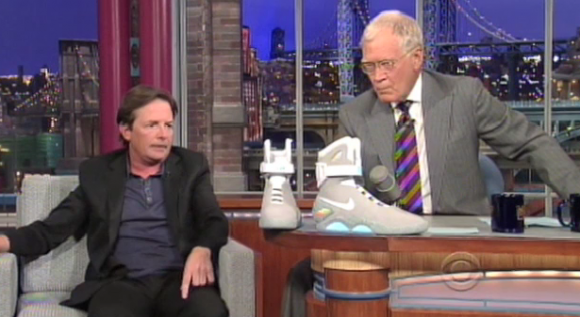 Then there’s the 2 minute high-quality viral video that goes with this whole project, it featuring each of the actors/etc listed above along with Bill Hader of Saturday Night Live fame selling some shoes at a NIKE store – check out what Hatfield says and note the date at which the Doc travels forward to – are we looking at another less exclusive release in the future? We’ll see!