If there’s one oddity that’s been taking the tech world by storm over these past 72 hours or so, it’s been the 2011 NIKE MAG shoe, straight out of the classic science fiction comedy film Back to the Future II. In this movie it’s Michael J. Fox in his most recognizable role of his career, Marty McFly, sporting the “NIKE MAG” sneakers in all their futuristic glory. We’ve got full details now on a 2011 release of the shoe, including the awesome fact that proceeds will be going to the Michael J. Fox Foundation in the end – but today a whole new bombshell may well have nearly slipped right under our noses: a “lost scene” from the Back to the Future movies that portends another release of this legendary sneaker set in the future: September 8th, 2015 to be exact, where they’ll include the most excellent “Power Laces” feature missing from the 2011 limited edition drop!

In this ad spot you’ll be glad to know that a whole slew of your best Back to the Future / NIKE / NBA personalities make their faces known including Christopher Lloyd (Dr. Emmett Brown in BTTF), basketball player Kevin Durant, Donald Fullilove (Mayor Goldie Wilson from BTTF) and NIKE design genius Tinker Hatfield behind the sales counter. Also the shoe salesman is Bill Hader (one of everyone’s favorite hero comedians currently starring on Saturday Night Live). It’s in this video that we expected to be seeing some extra awesome promotion of the 2011 NIKE MAG and not a whole heck of a lot else, but what we’ve gotten here is NIKE’s full understanding that no matter what they do to release the “greatest shoe never made”, if it isn’t exactly the same as it is in BTTF, it’s not perfect!

What we’re talking about here, of course, is Power Laces! Look at this video, will you? The entire essence of the NIKE MAG is in the power laces, McFly says so!

NIKE knows this good and well, a big portion of their hardcore fanbase being Sneakerheads who demand more than anything that their favorite shoe brand bring the heat. Therefor what they’ve done in this video is explain away the fact that this 2011 release of the shoe doesn’t have Power Laces by saying that, well now, of course they don’t, it’s not 2015 yet – the Doc gives Marty his fully-functional pair of MAGs in the year 2015, not the year 2011, how could we be so silly!

The video here shows Durant at the NIKE shoe shop being helped by Hader who introduces the 2011 MAG, showing off the lights and the lightness of the sneakers (as opposed to “Heavy” as Durant says, this harkening back to Marty McFly’s famous catchphrase). The Doc blasts into the room, eyeballs ablaze with classic Christopher Lloyd character acting intensity, demanding to see the MAG sneakers — but wait, where are the power laces? Behind the sales counter, Fullilove and Hatfield stand – Hatfield letting the Doc know that he’s traveled back to the wrong future date – he’d have to go forward a bit to 2015 to get the Power Laces version of the NIKE MAG. 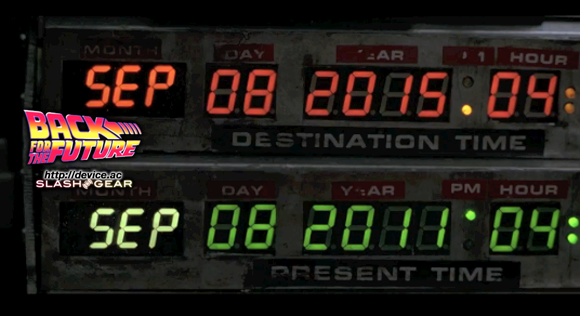 Of course the Doc needs those MAGs and he needs them to be equipped with Power Laces, so what do you know? He hops into that Flux Capacitor-equipped time machine capable DeLorean car of his and tears off into the future, but not before giving us a glimpse of the fact that he’s traveling exactly 4 years into the future to September 8th, 2011. Set the coordinates!

UPDATE: essentially CONFIRMED for a future Power Lace release in 2015, MTV’s interview with Back to the Future writer Bob Gale spells it out in nearly perfect plain English:

Gale: Nike wanted to do this in tiers. This is the beginning.

MTV: So if this year’s shoes don’t have the auto laces, future years’ might?

MTV: I can’t wait that long! I can’t be patient.

Gale: No one ever can.

Once again the facts on the 2011 NIKE MAG are as follows:

The original NIKE MAG was worn by the Back to the Future character Marty McFly, played by Michael J. Fox, in the year 2015. It came alive, lit up and formed to Marty’s foot. The 2011 NIKE MAG shoe was designed to be a precise replica of the original from Back to the Future II. The aesthetic is an exact match, down to the contours of the upper, the glowing LED panel and the electroluminescent NIKE in the strap. The 2011 NIKE MAG illuminates with the pinch of the “ear” of the high top, glowing for five hours per charge.

Check out the rest of our coverage of the 2011 NIKE MAG in two gigantic posts: NIKE MAG Official Details Released in Full [Updated with Max Detail] and NIKE teases legendary Marty McFly Sneakers with epic 1985 invite

Then head to the NikeMag Back For The Future site to pick yourself up a pair and support the MJF Foundation for Parkinson’s Research! Also note that you can check out an extremely well designed Flash-based website for this project over at http://www.back4thefuture.com/ AND that you’ll be able to purchase a NIKE MAG ceramic replica of the shoe for $88 USD or a NIKE MAG pin for $10 USD, all of the net sales, again, going to the MJF Foundation.