This week Google reveals the next generation in their Nexus 7 tablet line, keeping the name and amping up the display resolution to nearly double that of Samsung’s newest effort. While this device takes the Samsung Galaxy Tab 3 7.0 to the cleaners with its display alone, the most important comparison we can make at this moment is between the Nexus 7 and its biggest competitor – its predecessor!

What you’ve got with the new Nexus 7, what we’ll be calling Nexus 7 2 from this point on for ease in differentiation, is a machine that aims to feel rather similar to the original Nexus 7. The Nexus 7 2 works with a new back-facing camera (at 5 megapixels) where the original works with only a front-facing shooter. Both machines’ front-facing cameras are the same 1.2 megapixels strong – on the surface – but we’ll be the judge of which shoots better when we get them both set up next to one another in the field. 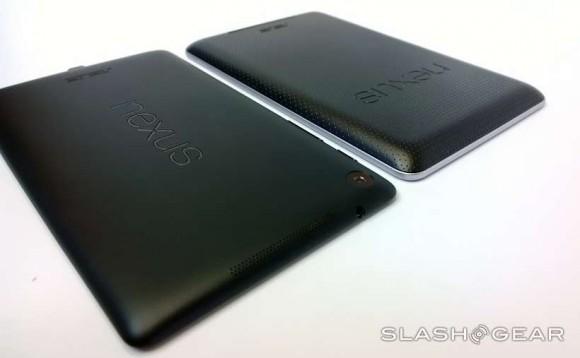 The Nexus 7 2 axes the NVIDIA Tegra 3 processor present in the original and brings on a Qualcomm Snapdragon S4 Pro. This is a quad-core processor working with Adreno 320 graphics, this taking the tablet down an entirely different avenue for potential features.

Where NVIDIA remains focused in the gaming universe – see SlashGear’s TegraZone tag portal and note how often the Nexus 7 pops up – Qualcomm’s approach in promoting processor power appears to remain a bit more subdued. Qualcomm’s Snapdragon line lives in the Nexus 4 as well, and you’ll not see NEARLY as much press coming from the big Q as you have from NVIDIA for the Nexus 7 and its Tegra 3. We’ll see if this trend continues through this tablet’s release. 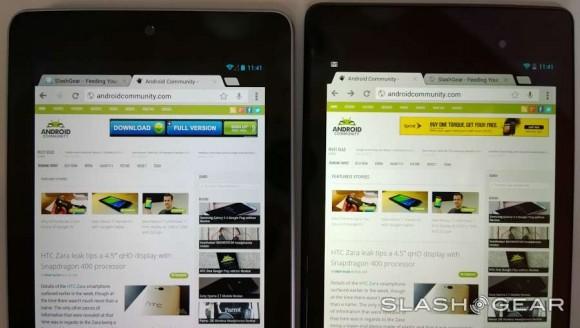 Below you’ll see two close-up photos of the Nexus 7 (old and new), both shot with the Nokia Lumia 1020 in 41MP mode by Vincent Nguyen. Why not, right?

And of course there’s the software differences when this new Nexus 7 arrives, but the added abilities of this new model will cut down to minimal once the older model gets its own software upgrade – one we’re sure won’t be far off. Now it’s on you!