The Curiosity rover sent to Mars this week by NASA has been collecting an ever-growing collection of photos from the Red Planet, the newest being the 360 degree panorama you see before you. This photo was taken with the vehicle’s highest-resolution navigation camera and is color-accurate to an unknown degree. We’re currently in the process of prodding NASA for their deep cover information on the cameras outside of what we already know – James Cameron is onboard!

In addition to the color photo you see above (and in larger “full size” format in the gallery below), you’ll be able to see some “3D” photos taken by the craft too. Head to this post from earlier this week to see photos taken with the vehicle’s dual camera setup and put on your red/green glasses for a thrill. Of course you know this means we’ll be seeing martians in three dimensions too – soon! 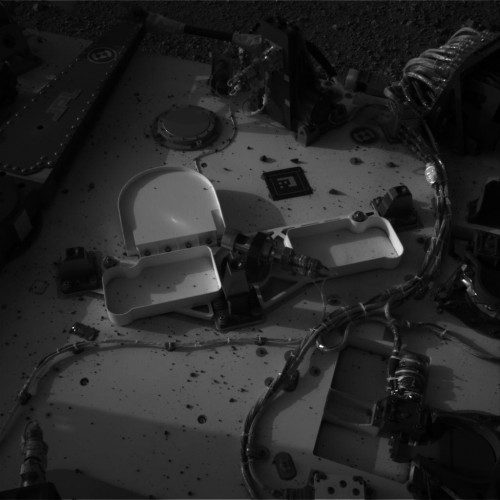 Thus far all we’re seeing is a bunch of rocks save for the machinery above and below the camera’s vision. The metal and plastic you see is actually part of the Curiosity rover, of course, and the cameras are able to look down further to make sure the rover is all there should a space monster come to take a swipe of it. While you’re at it, have a peek at the landing video NASA has provided of the beast heading towards the planet from earlier this week:

“The movie begins with a global image from NASA’s Mars Global Surveyor, then switches to views from the High Resolution Imaging Science Experiment (HiRISE) on NASA’s Mars Reconnaissance Orbiter. As we zoom closer and closer into Gale Crater, the components of Curiosity’s landing system come into view: The heat shield was the first piece to hit the ground, followed by the back shell attached to the parachute, then the rover itself touched down, and finally, after cables were cut, the sky crane flew away to the northwest and crashed” – NASA

Then have a look at a collection of relatively high resolution shots coming from the machine this week. NASA will continue to provide us all with shots such as these as they explore the crater in which they’re sitting right this minute on Mars for all of the months that they’ll be there. Stay tuned as this space program continues to blast its way into the future. Stay steady!