NASA’s Curiosity rover continues to send back images from Mars, including 3D shots that show the intimidating terrain, as the robotic explorer continues to ramp up to full functionality. The new photos use the multiple Hazcam cameras mounted at Curiosity’s extremities, pairing multiple fames to give a red/blue anaglyph 3D shot; meanwhile, NASA has also released a video that shows exactly where the landing site fits into the overall context of Mars. 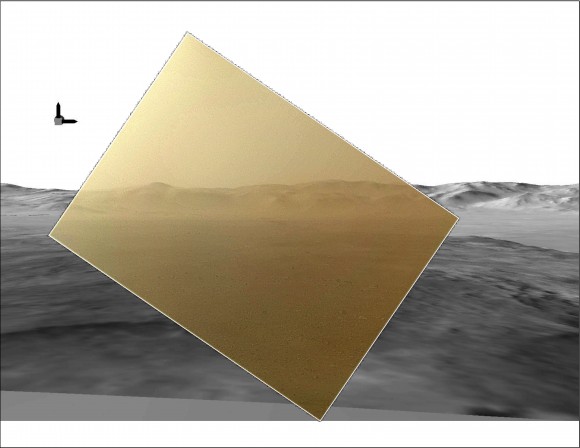 Photo quality has been steadily improving as the dust thrown up during the rover’s landing settles back down, and as Curiosity cautiously opens its lens-caps. These protective covers, applied to shield the cameras during the landing, are transparent but were unsurprisingly coated with a layer of grime.

Now that they’re being removed, however, the monochrome Hazcams are showing their full abilities. The cameras aren’t primarily intended for photo gathering – once Curiosity’s main systems are up and running they’ll be used for navigation and safely positioning the robotic arm – but for now they’re giving previously-unseen perspectives of the Martian landscape.

As for the landing video, NASA used incremental photos from the two orbiters to piece together where the  lander – and other elements of the payload, including the Skycrane and the heat shield – actually came down on Mars. The space agency had narrowed its target window so as to better position Curiosity for immediate exploration.

“The movie begins with a global image from NASA’s Mars Global Surveyor, then switches to views from the High Resolution Imaging Science Experiment (HiRISE) on NASA’s Mars Reconnaissance Orbiter. As we zoom closer and closer into Gale Crater, the components of Curiosity’s landing system come into view: The heat shield was the first piece to hit the ground, followed by the back shell attached to the parachute, then the rover itself touched down, and finally, after cables were cut, the sky crane flew away to the northwest and crashed” NASA 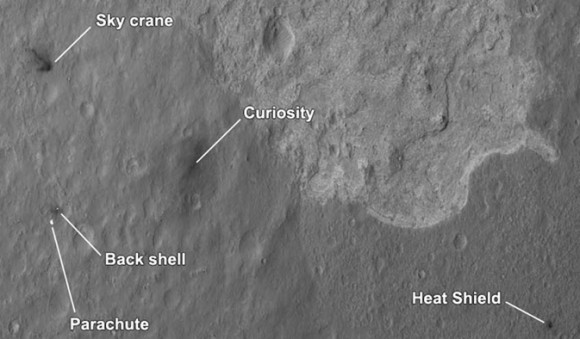 Full system functionality isn’t expected for a further week or so, with the main head of the rover not yet unpacked; at that point, the higher resolution, color cameras will be deployed, also capable of capturing 720p HD video. On Tuesday, NASA engineers instructed the raising of the mast and continued testing the high-gain antenna