New MacBook vs MacBook Air: Battle of the ultraportables

Until this week, the portable Mac question had a pretty straightforward answer: the MacBook Air was the go-to machine for most. Now, the new MacBook throws a slinky aluminum spanner into the mix. Revealed on Monday, the fanless 12-inch notebook takes what we loved about the Air – its waifish build, premium design, and lengthy battery life – and distills something even more portable from it, throwing in a Retina display and a controversial port decision along the way. Since then, plenty of people have been asking whether MacBook Air or MacBook is the way to go for those on the move.

Make no mistake, the new MacBook is very, very small. In fact, looking at Apple’s new 12-inch ultraportable next to the 11-inch MacBook Air, even though it has a larger display it’s smaller in all dimensions. The differences are even more pronounced

Of course, on the flip side there’s what you need to carry with you. Let’s say you’re looking to get some work done on a weekend away, transfer some photos from your camera, and get online in a number of occasions. If you’re thinking of an 11-inch MacBook Air, then you’ll need your power brick, a USB SD card reader (the 13-inch Air has an SD card slot built-in, but the 11-incher doesn’t), and either a USB or Thunderbolt ethernet adapter, if you want to use a wired connection anywhere. 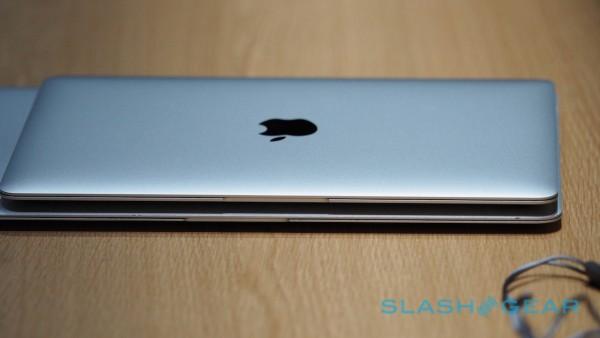 The new MacBook also lacks an SD card slot and an ethernet port; in fact, Apple doesn’t offer an ethernet adapter right now, and third-party vendors haven’t caught up with USB-C to ethernet dongles of their own. So, you’ll need either the $20 USB-C to USB cable or the $80 USB and VGA or HDMI adapters, and a USB ethernet adapter, and a USB SD card reader; a small USB hub would probably be useful, too, unless you’re happy to do some swapping along the way.

Of course, Apple intends the new MacBook to be more at home with wireless connectivity – if there’s an 802.11ac network around (or slower) it’ll happily jump onto that instead, the narrow groove in the underside of the hinge enough to squeeze in the requisite antennas. And in its favor, the USB-C port on the MacBook’s power adapter could charge your iPhone or iPad instead; or, at least, it could if there were USB-C to Lightning cables around, which seems only a matter of time. 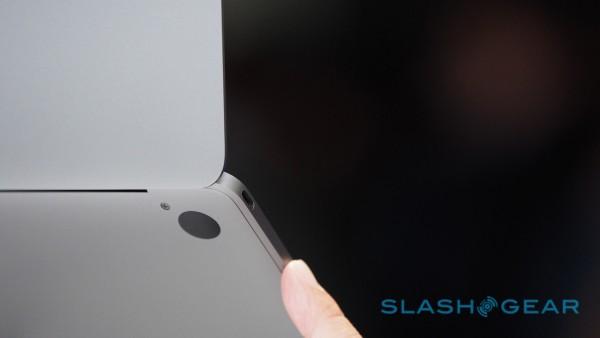 In short, the relative portability depends very much on how you use your MacBook, more specifically what you commonly plug into it. If the ports on your MacBook Air would normally go unused, then you probably won’t miss them on the MacBook. Conversely, if you’re often found hooking up external displays, external drives, USB sticks, or bigger – wired – keyboard and mice, then the new MacBook is going to have to bring some dongle pals along too.

Traditionally, if you spent more on a Mac you’d get a faster, more capable machine. The new MacBook bucks the trend somewhat, because Apple had to make a processor compromise in order to achieve its design goals.

Inside, on a tiny logic board, there’s a fanless Intel “Broadwell” Core M processor. No fan means the MacBook is silent and passively-cooled – in fact, the whole bottom aluminum panel acts as a giant heatsink – but it also limits the performance. 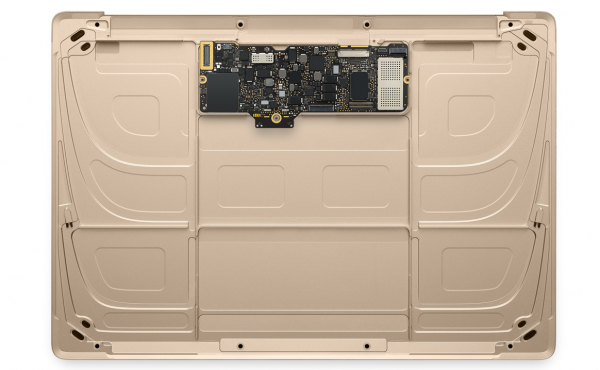 The Core M in the MacBook can be had in 1.1 GHz or 1.2 GHz forms, with Turbo Boost nudging that up to 2.9 GHz for short periods. However, the bigger limit is probably going to be the GPU: Intel’s HD Graphics 5300

If you’re looking to browse the internet, work on Office documents, and catch up on email, perhaps with a little iTunes movie downtime too, then the new MacBook will be fine. However, if you’re hoping to do video processing, or even play the odd game, then we’ve a feeling the 5300 GPU will be a bottleneck. We’ve not benchmarked the new Mac yet, but based on our previous experience with the graphics chip it’ll be slow-going at 1080p video crunching, and all but the most visually-lightweight games will be off the table.

In contrast, while the MacBook Air’s Intel HD Graphics 6000 isn’t going to rival a dedicated GPU (you’ll need to step all the way up to the 15-inch MacBook Pro for that), it’s certainly capable of iMovie work if you have a little patience. Gaming still isn’t its forte, but the combination of Core i5 or Core i7 processors and the faster graphics – not to mention not having to drive a pixel-dense Retina display – should give it the performance edge.

While you’re comparing the MacBook and the MacBook Air side-by-side for size, open up the lid. The new keyboard on the 12-inch notebook makes the Air’s ‘board look clunky, frankly, with its larger keycaps and lower-profile keys. 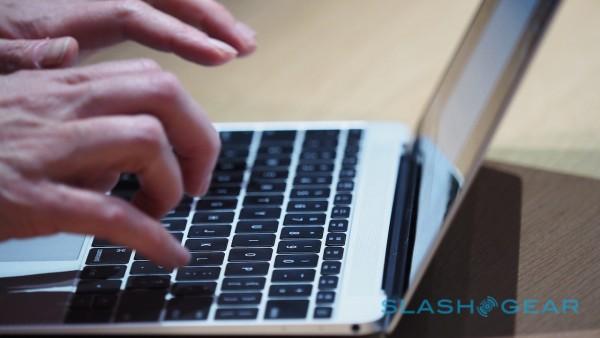 Of course, Apple keyboards already have a loyal following, and some may struggle to get used to the MacBook’s layout. The reduced travel is only part of it; Apple also switched to a new key mechanism, dubbed “butterfly hinges”, which leaves each key-press more even and stable in how it moves, but also changes the overall feel of the resistance thanks to a stainless steel dome underneath rather than silcone.

It’s not a bad feeling, but it is a different one, especially if you’re heavy-handed with your typing. At least the MacBook has a full-size layout – in fact, it was the keyboard size that defined the overall dimensions, Apple told us – and it’s actually slightly broader than the MacBook Air’s ‘board. Again, we’ll need more time with it to tell, but first impressions are positive: it seems quieter and, when you’ve trained yourself to press more lightly, less tiring. 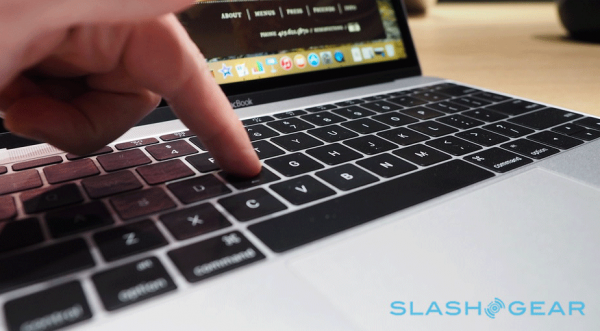 Under your wrists, meanwhile, is a larger trackpad which switches from the top-hinge on existing Mac trackpads. Dubbed the Force Touch trackpad, it now clicks in to the same extent no matter where you tap, and it’s also quieter than the old style. We’ll have to see exactly how useful the pressure-sensitivity is: Apple pitched it as a way to sketch out smoother signatures with your fingertip, as well as pull up contextually-relevant information by hard-pressing on words.

It’s a stunning display, pixel-dense at 226ppi, and graphics, videos, and text all look better than on the MacBook Air. It also means that you can finally watch 1080p Full HD content at native resolution, something the Air still can’t do. 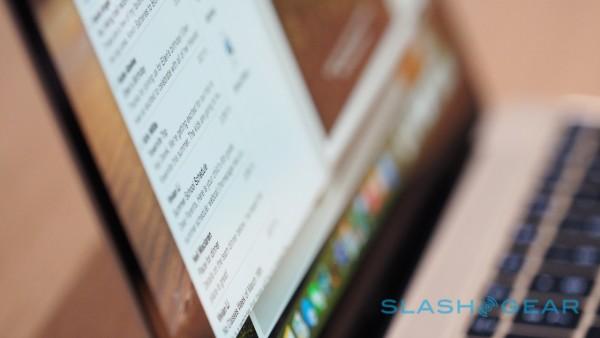 As for the battery, thanks to the new, “terraced” Li-Ion packs in the MacBook which fit more closely into the contours of the casing, the new ultraportable actually fits 35-percent more cells in than traditional, rectangular packs would allow. Altogether, that’s enough for up to an estimated nine hours of WiFi web browsing, or ten hours of 1080p iTunes playback, coincidentally the same as Apple predicts for the 11-inch MacBook Air. They’re the sort of numbers we’ll need to test out for real-world use before we can make a final judgement, however.

You pay a premium for portability. The MacBook starts off at $1,299, whereas the MacBook Air is several hundred dollars cheaper: the 11-inch begins at $899. There are some specs to be taken into consideration along the way, however. 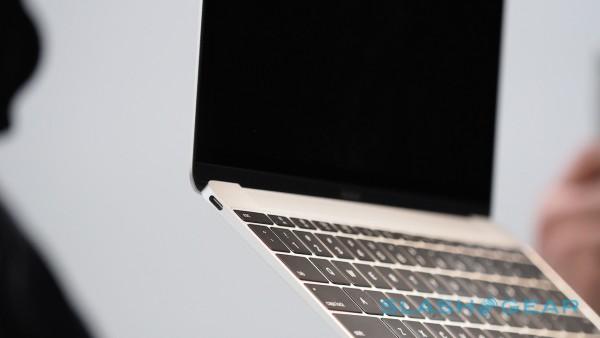 Meanwhile, there’s no shortage of Windows-based rivals which would love to find their way into your bag: Lenovo’s YOGA 3 Pro, for instance, is super-slim and flexible in its own right with a 360-degree hinge, while HP’s Spectre x360 is probably the best example we’ve seen recently of what you can achieve when a Microsoft and an OEM work more closely on a PC.

If OS X is your platform of choice, though, then the decision may come down to how self-contained your computing is and how reliant you are on the cloud. Those with a collection of much-loved peripherals are either going to have to add adapters or wireless versions to their bag if they want to embrace the new MacBook. 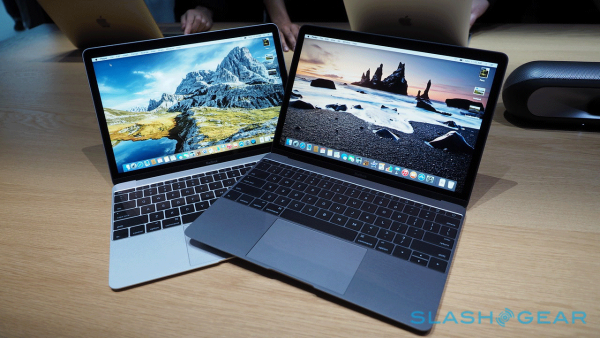 On the flip-side, if your documents and media are all online, your connectivity done through WiFi or wireless iPhone tethering, and your primary demand from a shoulder bag that it be light, then the 2lb MacBook may be the ultraportable you’ve been waiting for. We certainly can’t argue with its aesthetic.

We’ll need to spend more time with the new MacBook – and, indeed, the upgraded MacBook Air – to understand its capabilities (and limitations) in full. Until then, head over to our Apple Hub for all the news from Monday’s event.